Greece is a large and topographically diverse country so there are many different climates. For the most part, the weather follows a typical Mediterranean climate pattern with hot, dry summers and mild rainy winters. The country receives a lot of sunshine, for which it is rightly famous, and prolonged stretches of rainy weather are uncommon. There are really only two seasons in Greece: hot and dry between April and September; mild and wet from October to March.

There are, however, very varying weather patterns across the country dictated by the topography and distance from the coast. The high mountains, for example, have a very different climate to the islands; inland areas see more pronounced seasons than coastal areas; the south is hotter and drier than the north.

The Greek Islands are where most holidaymakers choose to go. A Mediterranean climate prevails with long, hot, dry summers and mild, wet winters. Summer weather in the islands begins in May with daily highs in the mid-20s. By July the daytime temperature is often in the 30s. July and August are the peak summer months when the temperature will rarely drop below 20°C even at night. Fortunately, the islands are visited by the cooling "Meltemi" winds - sea breezes that blow from the north and north-west. The winds are strongest in July and August when they are needed the most.

Mid-May to Mid-September is very dry, while July and August are unlikely to see any rainfall at all. Winters are mild and wet - somewhat akin to an English spring. The temperature will generally be in the low to mid-teens, although a sunny day can sometimes see the temperature creep up towards 20°C.

December is the wettest month of the year and over the winter there can often be strong storms in the Mediterranean. These can bring miserable weather for a few days, with strong winds and torrential rain. However, as most of the rain falls in heavy downpours, there are still a lot of sunny days and it can be very pleasant - and very quiet - time.

Greece is one of Europe's most mountainous countries, with over four-fifths of the country consisting of mountains or hills. The highest peak in the country is Mt. Olympus at 2917m. The mountains obviously experience very different weather in the lower regions of Greece. Their climate is alpine. Higher altitude means colder temperatures, more clouds and higher rainfall. Mountain weather is also highly unpredictable.

Many of the higher mountains remain snow covered for several months of the year, and there are even several ski resorts - not something you'd usually associate with Greece! 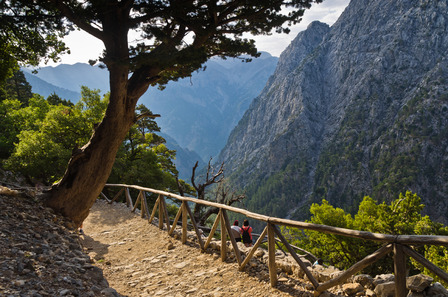 The high mountains of Crete, Greece.

Mainland Greece has a slightly different climate again; it is less influenced by the sea than the islands, is influenced by the giant landmass of Europe and has many microclimates due to the effect of the mountains on the prevailing winds.

There are more extremes of temperature on the mainland compared to the island and coastal regions. Summer temperatures can be in the 40s - Athens has recorded a temperature of 48°C. A severe heat wave in summer 2007 saw devastating forest fires hit Greece. A prolonged period of hot dry weather left the countryside susceptible to the fire. This is a frequent danger each summer in Greece.

Conversely, cold winter temperatures can occur and snow can even fall in the low-lying regions, though it is not common. A severe cold snap in winter 2004 saw Athens receive snowfall and temperatures touching -10°C.

Variations in weather occur across the Greek mainland - Eastern Greece and the Athens area are many dryers while the north and west have a wetter climate. Northern and eastern Greece has a much more continental climate, experiencing the coolest temperatures in the country on average and a more extreme range between highs and lows. The north of the country is on average temperatures around 5°C cooler than the coastal regions in the winter. 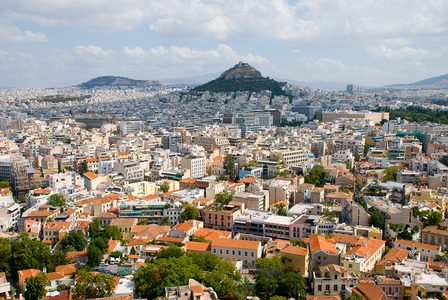