Italy covers a long boot-shaped peninsula in Western Europe as well as the islands of Sicily and Sardinia. The country has coastlines with the Adriatic and Tyrrhenian Seas both of which are parts of the Mediterranean Sea. Italy shares borders in the north with France, Switzerland, Austria and Slovenia From snow-capped mountains in the north to year-round warmth in the south, Italy has a truly varied climate. Winter temperatures vary greatly across the country from the Alpine climate in the north to the southern Mediterranean climate of the south. It can be subzero in Milan while it's 20°C in Palermo, Sicily. In summer the differences are much less marked. There are big differences between the coastal regions and the interior of the country, especially as you gain elevation. The mountains create many microclimates. The record low temperature recorded in Italy is -29°C. This excludes elevated areas where it can get much colder: -45°C has been recorded in the Italian Alps. The record high is 46°C in the far south of the country.

Italy is a very mountainous country with the Alps in the north and the Apennine mountain range that extends right down the peninsula and rises to over 2000m in parts. The islands of Sicily and Sardinia are mountainous too – the 3323m high Mt Etna sits on the east coast of Sicily. The plains south of the Alps are the only flat part of the country.

The north of Italy is dominated by the Alps. Mont Blanc, Western Europe's tallest mountain at 4810m creates the border between Italy and France in the northwest of the country. There are other mountains over 4000m too, including Monte Rosa and the Gran Paradiso. Much of this region is snow covered all year round and can see very cold temperatures, sometimes down to -30°C. The Alpine climate of the mountains sees cold winters with plentiful snowfall, while summers are warm in the regions below 1500m. Skiing is a popular pastime in the mountains of Italy. Out of the mountains, northern Italy generally enjoys a continental climate with hot summers and cold winters.

Turin lies at the foot of the Alps and sees temperatures range greatly across the year: average temperatures drop to -2°C at night in winter and rise up to 27°C during the day in July and August. Milan has a similar climate but can get a touch hotter in summer and even a little colder in winter. Verona near to Lake Garda experiences the same sort of weather. Snow is a common occurrence in midwinter in the region. Rainfall is moderate to high and can occur throughout the year but is at its greatest in spring and autumn and lowest in summer. Rainfall/snowfall increases with elevation and even the foothills can experience snowfall right into springtime. Venice also lies in the northern flatlands, through its coastal location means winters don't see temperatures fall quite as low. Average temperatures in Venice vary between 3°C and 23°C, with winter lows of -1°C and summer highs of 28°C.

The climate of the east coast is dictated both by the temperate Adriatic Sea as well as the Apennine mountains inland. It is a Mediterranean climate that prevails on the coast marked by warm summers and mild winters. This climate really begins a little south of Venice which receives the more northerly continental climate. The east coast is generally drier than the west and gets a little cooler in winter. The northern half of the east coast, above Pescara, is cooler on average than further south and can be subject to the bora winds that bring cold weather in winter and spring. Pescara is roughly in the middle of the east coast and sees average summer highs of 29°C and winter lows of 2°C. Ancona, further north, sees similar temperatures but in the more southerly city of Bari, it's a little warmer with average winter lows of 5°C and summer highs of 28°C. Subzero temperatures are very rare along the coast. Rainfall is similar all along the coast; rainfall levels are not high but rain can fall at any time of year. The wettest time is autumn with average monthly rainfall up to 60mm, while the driest time is summer with around 25mm per month.

Again, the west coast has a Mediterranean climate. It is wetter than the east coast and has slightly warmer winter temperatures. In the north, Genoa sees winter lows at 5°C and summer highs around 28°C. In the south, Naples has similar winter temperatures but summer months get a couple of degrees hotter. Rainfall is similar all down the coast at about 900-1000mm per year. It is low in summer, at around 20 to 30mm and spring is also quite dry. The wettest period is late autumn when storms can come in from the Mediterranean. November is the wettest month with around 160mm.

The Apennines dominate the interior of the Italian peninsula. Reaching up to over 2000m, they see cold temperatures in winter and snowfall between December and January. They also cause weather differences between the west and east of the country; the west is generally wetter and has warmer winters, while both experience similar summer temperatures. Temperature decreases and rainfall increases as elevation increases. Rome lies in the centre of the country on the western side of the mountain range. Temperatures vary from lows of 2°C in January to highs of 31°C in July and August. Rainfall is moderate with autumn and winter being the wettest periods. Florence sees a similar climate to the capital. 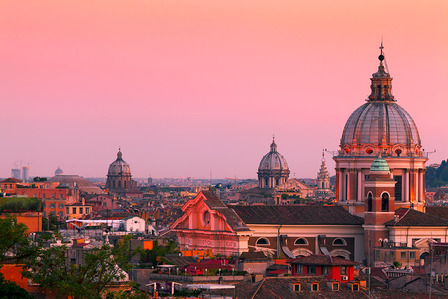 The Far South, Sicily and Sardinia

These two large islands to the west of Italy and the far south of the country enjoy the least rain and the highest number of sunshine hours of the country. Sunshine averages four or five hours a day in winter and up to eleven hours in summer. In Alghero on Sardinia, summer highs reach an average of 34°C. Summer temperatures are often in the 30s in Sicily's main city of Palermo as well. Sicily enjoys the mildest winters of anywhere in the country with lows rarely dropping into single figures. Sardinia enjoys a mild winter too, though it can get a little colder. Both islands, as well as the far south of the mainland, are mountainous which causes different weather across the regions; the higher areas are generally cooler and more precipitous, especially in winter. The massive volcano of Mt Etna in Sicily sees snowfall each year as it stands at more than 3000m above sea level. Rainfall is lower year-round in these regions than the rest of the country – at around 500-600mm a year on average - and summers are particularly dry. Stormy weather does occur in autumn and winter.