Vietnam stretches down the east coast of South East Asia's Indochina Peninsula. The country shares borders with China, Laos and Cambodia and shares its coastline with the South China Sea. Visitors are drawn to Vietnam due to its undoubted natural beauty and its cultural richness.

The country has a varied landscape, ranging from beaches to mountains to jungle, as well as a varied climate. The climate if Vietnam is primarily dictated by the monsoons and the climate can be described as a tropical monsoon climate. The year is divided into two different monsoon seasons:  the north-east monsoon from November to April and the south-west monsoon from May to October.

There are definite regional variations in the climate. The north of the country is a fair bit cooler than the south and has much more marked seasonal variations. For example, the average temperature in Hanoi in the north varies from 17C in January to 28C in July and August while Ho Chi Minh City in the south sees monthly averages range between 25C and 30C. The mountains in the north see cooler temperatures than anywhere else, especially the higher you get. Lows can drop to 5C in some parts in the coolest months; at the same time, it could be almost 30C in the far south.

Rainfall varies a good deal too. The mountains of the north are the wettest place while the coastal plains of the south are the driest. Annual rainfall can vary from 1200mm to 3000mm across the country. Hanoi itself averages around 1600mm.

You can find a detailed overview of Hanoi's weather here.

The northeast monsoon prevails between November and April and brings generally cool dry weather to Vietnam. In the capital Hanoi, situated towards the north of the country, the average temperature is 21C in November. Temperatures begin to cool in the following months and the comfortable temperatures and low rainfall make it a great time to visit. Hanoi averages 17C in January, the coolest month of the year. From February, the temperature starts to rise again and by the time the south-west monsoon arrives in May the capital is experiencing daily highs above 30C.

Although the northeast monsoon sees the coolest and driest weather of the year across the country, there are marked differences from place to place. While Hanoi may average 17C in January, Ho Chi Minh City in the south is a lot warmer, averaging 26C. Similarly, the mountainous regions in the far north of the country are much cooler, especially at the highest elevations which can often see lows fall into single figures at night.

Rainfall is low during the northeast monsoon as the winds that fuel it bring dry air to Vietnam. December and January are the driest months of the year across the country; Hanoi sees around 20mm per month, the south can see even less, whereas the mountain regions can still expect the odd shower. Rain starts to build a little from April as the monsoon winds begin to shift.

This period really is the best time to visit Vietnam, especially December and January which enjoy the most comfortable conditions of the year. If you're heading to the south you'll be glad to avoid the hottest and most humid days that occur around May. Wherever you're heading in the country the north-west monsoon period certainly offers the most sunshine. The odd shower can still catch you out but they are few and far between.

The south-west monsoon runs from May to October and brings hot, wet weather to Vietnam. As hot air from the Gobi Desert of northern China and Mongolia rises, it draws in the moisture-laden air from the Indian Ocean towards the Asian continent and this results in rainfall all over south-east Asia.

The rains usually arrive in May and many parts see more than 200mm of rainfall in this month. The rains increase steadily and by July they have built to their heaviest. July and August are generally the wettest months of the year. September and October herald the retreat of the monsoon rains. The exact timing of the rains can vary according to where you are in the country. As the winds arrive from the south-west, that part of Vietnam experiences the rains first while the northern regions may not receive the monsoon rains until a week later.

The monsoon rains are never predictable and some years will see much heavier rainfall than others. Sometimes torrential downpours can hit the country, even dumping as much as a whole month's average rainfall in just 24hrs. Flooding and landslides are a constant threat each year.

Temperatures are at their hottest at this time of year. In the south, the end of the dry season around April is the hottest time of year with temperatures averaging 30C and daily highs often in the upper 30s. In the north, the hottest temperatures come around June and July with monthly averages around 28C. Combined with the high humidity it can become quite uncomfortable especially if you doing any exerting activities.

You don't necessarily need to be put off by the monsoon season; cheaper prices and fewer crowds help make up for the more unreliable weather. Travel is still possible in most areas, although you may have difficulties with the roads if visiting the hilly areas of the north. There can still be a good amount of sunshine as much of the rain falls in short sharp showers that are quickly over with. Remember, though, that downpours lasting several days can occur and it's also typhoon season. 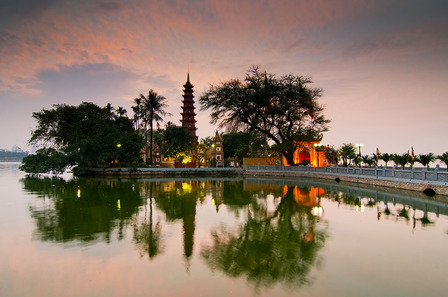 The coast of Vietnam is threatened by Typhoons each year. These intense tropical storms build in the South China Sea and sometimes their path can bring them directly to the coast of Vietnam. They can be very destructive and threaten lives and livelihoods.

The northern and central coastlines of Vietnam are the most at risk from Typhoons. As many as 5 a year can hit the country but they vary considerably in strength and destructiveness. Some may bring no more than heavy rains and strong winds but others can cause intense flooding, severe landslides, claim thousands of lives and cause millions of dollars worth of damage. Severe typhoons hit Vietnam about once every 5 years on average. In 2006 Typhoon Durian claimed nearly 1500 lives across Vietnam and the Philippines and caused more than $400 million worth of damage in the region.

South Vietnam and the more inland areas in the north are less exposed to Typhoons, but can still be troubled by particularly strong ones.