Costa Rica has an exceptionally diverse climate for its small size due to the combined effects of weather systems originating over the Pacific and Atlantic Oceans, and the Carribean Sea, and the country's mountainous topography. Costa Rica is in Central America and sits just below the equator between Nicaragua, to its north, and Panama, to its south. It is well within the tropics, but the many controlling factors mean there is a great deal of seasonal and regional variation in the weather experienced year round.

Costa Rica is part of the Pacific Rim of Fire, a chain of volcanoes, some of which are still active. Costa Rica has a high level of geological activity with volcanic eruptions and earthquakes. While low-lying areas are hot year-round, temperatures decrease at increasing altitudes and can fall to 0°C at the highest elevations, though snow does not form. Most regions have distinct wet and dry seasons though in some places even the dry season sees abundant rainfall. In general, the wet season, also called the 'green' season, lasts from May till November and the dry season from December till April. The Carribean coast tends to be more consistently wet than the Pacific coast, and rainfall is generally higher at higher elevations. You should always check travel routes before planning your journey in Costa Rica as heavy rains often make many roads impassable.

The Central Valley is a relatively flat plateau surrounded by mountains and volcanoes. Its elevation ranges between 800m and 1500m above sea level, so it is milder here than at lower elevations. The climate falls between tropical and subtropical highland and is considered the area with the most pleasant weather in Costa Rica. The good weather, the impressive mineral wealth, the fertility of the volcanic soil and the many rivers running through the valley have made it the most densely populated area in the country. While the region sees abundant rainfall, between 1100 mm and 2500 mm depending on location, it is quite dry in comparison to coastal areas and mountain slopes. The area is very windy year round which can help to keep perceived temperatures down.

The wet season lasts from May till November when heavy downpours fall on most days. The wettest months are September and October. The start of the season is the hottest part of the year and temperatures gradually decrease as the season progresses. However, the wet weather means high humidity and even when it is relatively cool it can feel uncomfortably hot and sticky. San José is the capital city of Costa Rica and sits amidst the tropical rainforest of this region. San José sees around 300 mm of rain per month in the peak of the wet season, and sees an average high temperature of 30°C in May which climbs down to 28°C between June and August, and gets down to 26°C by October. The average low temperature, occurring at night, works its way from the high to low teens. Despite the heavy rain, six or seven hours of sunshine can still be expected.

The dry season lasts from December till April. Rainfall levels drop dramatically to a light drizzle at the very start of the season and then reduce to the occasional light shower. Between February and March tends to be the driest time of year. It is coolest in December and January then heats back up, reaching the year's highest temperatures in April. In San José, the average high temperature gets down to 25°C in December and January, then creeps up to 26°C in February, 28°C in March and back to 30°C in April. During the start of the season, the heat levels are pleasant in the day time and you will get some relatively cool nights. Sunshine levels don't alter as despite the absence of rain it can still be cloudy. Bright, dry weather with comfortable heat is a regular occurrence.

The central valley is home to Costa Rica's highest active volcano, Irazú, which has erupted frequently in recent times. The latest eruption was in December 1994 and its most famous eruption lasted from 1963 till 1965. The region is also home to many areas of 'cloud forest', where unique climatic conditions create areas of tropical and subtropical forest that are enveloped in low-lying cloud.

This region is known for its stunning beaches. It is very popular with tourist who comes to enjoy the small fishing towns, sunbathe, surf and scuba dive. The Nicoya Peninsula has a more rugged coastline and is home to some secluded beaches of exceptional quality. This is the driest region of Costa Rica but it still has a very wet season. It is very hot and as humidity soars the wet season can be almost unbearable. Rainfall follows the pattern seen in the central valley, as do temperatures, though they are much higher. Rainfall is highest in the south due to the southwest direction of the prevailing winds coming in from the Pacific Ocean.

The wet season lasts from May till November and again September and October tend to be the wettest months. It rains with staggering frequency, often washing away roads, and this does not amount to pleasant holiday weather. It is always hot in this area but temperatures do decrease as the season progresses. In Puerto Jiminez, on the south coast, October is the wettest month and sees a whopping 650 mm of rain. In Tamarindo, a popular resort in the far north, September is wettest and sees an average of 360 mm of rain. Rain-bearing winds hit the southwest coast before the central valley which accounts for the higher rainfall in this region. The average high temperature drops to 32°C in May, which is still excruciating, and 30°C in June, increases slightly to 31°C in July and August, then drops again to 29°C for the rest of the season. The average low drops from the mid to low 20s, and with humidity soaring it never feels cool. Sunshine levels sit around five or six hours of sunshine per day. 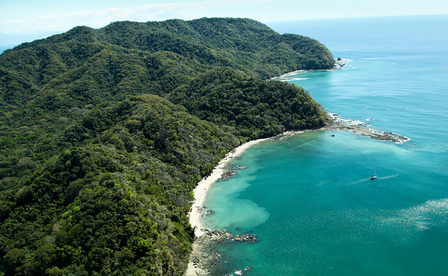 Lush jungle-covered mountains stretch out into the Gulf of Nicoya next to the rocky and sandy beach of Ballena Bay in Costa Rica.

The dry season lasts from December till April. Rainfall levels become incredibly low in the north while in the south the odd heavy shower does still fall. To the north light, drizzle can be expected at the start of the season but soon rain becomes very rare. It is lower in fact than in the central valley as rain is wrung from the wind as it hits the southwest coast, and any left passes over the relatively flat landscape unhindered till it hits the mountains. The heat steadily increases until April, the hottest part of the year. In Tamarindo, February sees an average of just 2 mm of rain, and the average high temperature climbs back into the low 30s, reaching 34°C in April. Sunshine levels get up to seven or eight hours of sunshine per day with March and April seeing the sunniest weather of the year.

This region sees high rainfall year round but it does not see the extreme peaks in rainfall seen at the wettest times of year on the southwest Pacific coast. There are two wet seasons, from November till January and from April till August; and two dry seasons from February till March and from September till October. The second dry season is really just a slight lull in rainfall levels – it is still very wet. Most of the year it rains between fifteen and twenty-four days per month, usually in heavy tropical storms, but from January till April rain falls on between ten and six days per month, which is really not a problem. Humidity is high year round and the temperature always sits in the high 20s or early 30s in the peak of the day's heat. At night it rarely falls below 20°C. In Puerto Limon, around the middle of the Carribean coast, the highest average high of 30°C lasts from March till May, and the lowest average high of 28°C lasts between November and January. Around the coast, these high temperatures are somewhat tempered by a coastal breeze. Sunshine levels stay around six or seven hours per day whatever the season as showers tend to clear the sky of clouds while clouds can linger without them. Generally, whatever time of year you will see plenty of sunny weather. 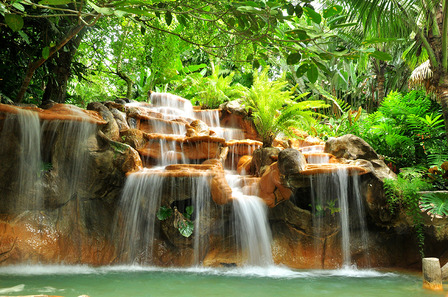 The north of this region is largely inaccessible which has allowed for the preservation of incredibly diverse and unique natural habitats in pristine condition. Most of the northern Caribbean region is protected, as it is home to two national parks. This area is more popular with backpackers and eco-tourists than with people looking for a beach holiday, largely because it is so hard to get to and travel around. The southern Caribbean coast is very popular with everyone as it is easily accessible and has the stunning beaches and bustling ports as well as secluded rainforest hideaways, stunning national parks and rich marine life.