Mediterranean climates are characterised by long and dry summers and fairly mild, rainy winters. The shoulder seasons of autumn and spring are generally quite short and experience mild conditions. Cyprus is under the influence of a shallow low-pressure trough which extends from the great continental depression that is centred over southwest Asia. As a result summer heat can at times be unbearable and the skies during these months are often completely cloudless. This also keeps winters around the coast exceptionally mild with daytime temperatures usually in the low to mid-teens; snow is only observed at higher altitudes and only very rarely in the lower regions.

Cyprus as a whole remains very sunny throughout the year. On average the number of daily hours of sunshine ranges from six in midwinter to twelve or thirteen in midsummer. The invariably clear skies that allow this also mean that rainfall is very low throughout the summer and it is highly likely that any trip you take during this season will see no interruption to the dry weather. Sea temperatures are exceptionally warm throughout summer, peaking in the high twenties, but are comparatively chilly from December until early May. However, even during the winter, the lowest average is still in the high teens, as warm as it ever gets around the UK.

Summer is the most popular season for its endless heat and sun. If you are not a fan of high temperatures then it is best to visit Cyprus in the offseason of spring when the weather is sunny and but not too hot and the island is in full bloom. Autumn is also an enjoyable time to visit, though the scorching summer results in the island drying out considerably, only returning to its green beauty after the winter rainfall.

There is some regional variation in weather across the island. There are two mountain ranges on the island: the Troodos Mountains that cover most of the southwest of the island and reach almost up to 2000m, and the smaller Kyrenia mountain range in north-central Cyprus. Between the two mountain ranges is the low-lying, mostly flat Mesaoria plain. Regional variation is largely due to differences in altitude, with cooler temperatures being seen higher up, but the mountains also cause a variation in rainfall across the island. They protect the central plain from rain, resulting in a semi-arid climate, and also the east coast, but not to a great extent.

While legally the whole of the island is the Republic of Cyprus, the northern third is claimed and occupied by Turkey, calling itself the Turkish Republic of Northern Cyprus. While relations between the Greek Cypriots and the Turkish Cypriots are still tense, and the Turkish occupation is considered illegal, relations have improved in recent years. In 2008 the wall splitting the two sides of the island was demolished and Ledra Street, which it crossed, was reopened. When passing from one side to the other, you will be subject to identification checks.

Summer weather in all Cyprian coastal resorts is generally considered fantastic. The temperature starts to warm up by late April and early May, and peaks in July. The average high temperature sits in the low to mid-thirties, but the peak months often see temperatures reaching the 40s. There is little climatic variation from north to south through the west tends to be very slightly cooler and wetter due to the westerly direction of the prevailing winds. Larnaca lies at one of the lowest altitude points in Cyprus, on the south coast in a sheltered bay. June and September see average daily highs of 30°C while July and August see 32°C. During the summer months, there is often no rainfall. Limassol, to the west, experiences summer highs usually a couple of degrees cooler than Larnaca.

The coast as a whole will not be as hot as low-lying inland regions as it benefits from the cooling Mediterranean waters and winds that blow across the coast, particularly in the evenings. However, if you can't stand the heat you will need to head inland and up into the hills or mountains where cooler temperatures are guaranteed.

Winter lows all around the coast sit between averages of 14°C and 16°C. Winters tend to see average high temperatures in the mid teens but this is often shared amongst sunny days when the temperature gets up to 20°C, and blustery, wet days when it might not get much above 10°C. It is warmer around the coast than inland in winter again due to the moderating influence of the Mediterranean. This is when the majority of the rain falls. Rainfall levels peak in December and January and tend to be moderate in the lead-up and fall off, getting lower and lower towards summer. Strong winds and violent storms sometimes blow in during the winter, but they rarely last for long. 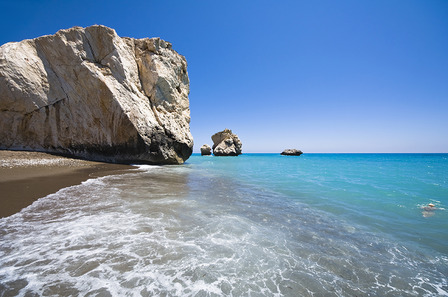 As mentioned above, central Cyprus is a low, flat plain with mountains to its north and southwest, resulting in a semi-arid climate. The Mesaoria plain lies to the northeast in between these two mountain ranges (Mesaoria literally translates to 'between the mountains' in Greek). The plain is bare, dry and fairly barren. The only trees which are present have been planted as windbreaks and the only plants that grow are quickly destroyed by grazing animals. Rainfall on the plain is much lower than anywhere else on the island. Due to its low altitude and distance from the sea, temperatures can often be uncomfortably hot.  The plain is also abundant in calcium carbonate, which is locally referred to as 'Kafkalla.' The calcium carbonate has been compacted into a hardpan, which can be problematic as it impedes the drainage of water and restricts the growth of plants.

Cyprus' capital, Nicosia (known locally as Lefkosia or Lefkosha), is located almost directly in the centre of the island. The city experiences scorching summers, also a result of its distance from the coast.

Summer sees Nicosia with average maximums of 36°C in July and August and average minimums of 18°C to 21°C from June to September. In the past, each month from May to October has seen maximum temperatures in excess of 40°C, with June, July and August each seeing highs of a blistering 44°C. December to March sees average lows of 5°C to 7°C and average highs of 15°C to 19°C. The autumn and spring seasons see average temperatures in the mid-20s. January is the area's wettest month, with Nicosia averaging 14 wet days throughout the month. Rain begins to die off in about April and doesn't restart again until October, with the height of summer often seeing no precipitation whatsoever. The aridity of this region means that droughts are the norm and people have to conserve water in underground wells.

View of Nicosia, the capital city of Cyprus.

The Mountains of Cyprus

The mountains of Cyprus see cooler, wetter weather than the rest of the island and as such is thickly forested with pine and cedar trees. Rainfall is still low in the summer but it is not as uniformly dry as on the coast or in the central plain. In the winter the mountains see plentiful snowfall. The Kyrenia range sees around 500mm of precipitation annually while the Troodos Massif sees around 1100mm due to its much greater height.

The Troodos Mountains' highest mountain is Mount Olympus, not to be confused with the Mount Olympus, the highest mountain in Greece between Thessaly and Macedonia. The heavy snowfall means there is actually a ski resort on Mount Olympus, with a ski season lasting between January and April. One of the great draws of Cyprus in the winter is that you can enjoy a stroll on a warm beach on one day, and go skiing the next. Wherever you are on the island, the ski resort is within driving distance.

Out of ski season, the mountains still draw people looking for an active holiday, as walking in the hills or hiking to the top is a fun and manageable activity for most people. Aside from taking in the beautiful green scenery, if you're there early in the year, the Troodos Mountains has nine Byzantine churches and one monastery. These were built away from the coast of Cyprus which was regularly under attack. The Kyrenia range is also covered in ancient castles and watchtowers which were built due to the vantage point afforded by the Kyrenia's location near the coast.