The Republic of Seychelles; located in a region of 115 islands amongst the Archipelago Nation is a small country with a tropical climate all year round. Seychelles situated in the Indian Ocean approximately 1500km east of the African mainland is an ideal holiday for beach lovers and tourists who love to vacation in the sun.

The region is hot and clammy for most of the year but the heat is usually moderated by cooler sea breezes flowing in between the islands.

Although the beaches on the islands are famous for the year-round satisfaction this region of Africa does not experience one distinct dry season. July recognised as the country's driest month, still receives 70mm of average rainfall. July is also the coolest month with an average temperature of 27oC.

This is the calmest and warmest period of the year as the winds die down from earlier months, before reverting to the Southeast.

Southeast Monsoon - May to October

This is a characteristically drier and cooler time when the winds that flow above Seychelles are subjected by the "South-east Trades" when they reach their highest in the months of July and August. Precipitation throughout this period is usually minimal in character and relatively brisk.

This season is noticed by the movement in wind command from Southeast to Northwest connected with the "onset" of the rainy season. Throughout this time the temperature remains reasonably warm with very light winds. 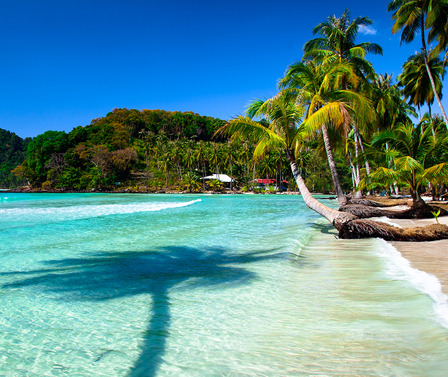 This is the primary rainy season throughout Seychelles and it can get tremendously damp in December and January. This period is also warm even with winds that are mainly directed from the West to the northwest but are not strong.

Although the country experiences variances within its monsoon seasons, the climate in Seychelles is never extreme, due to the closeness with the Indian Ocean.

This soothing climate will normally offer rains at one part of the island, while the other part remains dry and sunny. The weather will generally remain pleasant and arid during the period from May to September making the sea calm while the weather remains hot and humid.

Seychelles climate also remains cool during these months when the sea is lively especially in the southwestern coasts.

Beaches Affected By the Monsoon

Even though the Monsoons bring physically powerful winds all but the furthest southern islands lie contentedly outside the cyclonic belt making Seychelles' a year-round destination for sun worshippers and beach lovers.

Given Seychelles is situated within the Southern Hemisphere the difference between night and day barely changes. It is estimated that the islands receive about seven hours of consistent sunshine daily. Because Seychelles is within the southern hemisphere they present a completely diverse night sky, this beautiful gift will astound many visitors for various places in the world. 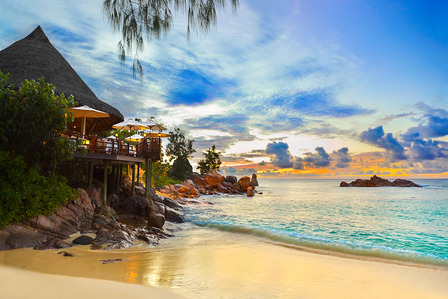 Cafe on the beach in the sunset, Seychelles.

Recent studies show changes in the regional climate in Seychelles such as sea-level rise, changes in precipitation and elevated sea-surface temperature are affecting many physical and biological systems, which have an impact on social and economic systems.

It is, therefore, necessary for tourists to be aware of this matter and for locals to take urgent action to address climate change at the global level.

Forceful adaptation strategies need to be developed such as a need for improved water-resource management to meet the change in the rainfall pattern and the protection of coral reefs from bleaching.

Seychelles enjoys a near-perfect climate with temperatures always ranging between 24oC and 32oC. Even though it rains more than frequently throughout the islands; resulting in high humidity up to eighty per cent, the light winds that course among the region tend to keep the climate at a more pleasant level. Mahe, Praslin and Silhouette, for example, are the islands known to have significant peaks of much higher rainfall than the smaller islands resulting in cooler climates.

The surrounding mountains are also often engulfed by a cool wet mist keeping temperatures relatively low. In other words, it never gets cold on the islands but the moderating influence of the Indian Ocean means that it also never gets too hot. The serenity amongst these beautiful islands is almost irresistible and should be recommended as a pleasurable relaxing vacation to travellers at any time of the year.