Will Warmer Weather Affect The Coronavirus?

The UK is comprised of England, Scotland, Wales and Northern Ireland. It receives a temperate maritime climate with all four seasons but no extremes of temperature. The UK's climate is generally mild but changeable. But due to climate change, the last decade from 2010-2020 has seen more extreme patterns in temperature and rainfall.

Why Is The UK Weather So Changeable?

As it is a relatively small landmass, there isn't a great deal of regional variation in the UK. However, there are a number of microclimates; rain and temperature variations are caused mainly by elevation, proximity to the Atlantic Ocean, and to a lesser extent, latitude. It is generally warmer in the south than the north.

Why Is Britain So Wet?

As a whole, the UK is infamous for its changeable weather, cloudy skies and persistent rainfall. The North Atlantic and the Gulf Stream, which meets the west coast, is to thank for milder temperatures than expected at this latitude, but also to blame for the rain and erratic nature of the weather.

The east shares a coast with the North Sea, which is considerably colder than the Atlantic as it meets the cold landmass of Europe and is not warmed by the Gulf Stream.

Weather In The UK Major Cities

Rainfall across the UK is not actually particularly high in volume if compared to subtropical and tropical locations, but it does tend to rain frequently all year round. Due to the westerly direction of winds coming in from the Atlantic, areas on the west coast are wetter than those on the east coast.

Cardiff Is Wetter Than London

Scotland Is The UK's Wettest Country

The difference is particularly pronounced in Scotland as the east coast lies in the rain shadow of the western highlands. The west coast of Scotland sees 265 days of rain across the year, whereas the southeast only sees 170 days of rain.

Flooding in the UK

In 2009 unprecedented high rainfall led to a series of disastrous floods. In the May-July period was the wettest since records began. Some areas were soaked with a month's worth of rain in 24 hours. Counties across England, Ireland, Wales and Scotland were affected, leading to millions of pounds of damage.

The autumn of 2000 saw exceptionally high rainfall across England and Wales, lasting for over seven weeks. This was the heaviest rainfall recorded in 270 years and led to flooding which affected 10,000 homes and businesses, and forced 11,000 families to evacuate.

IOn 26 February 2020 Storm Dennis caused a record-breaking number of flood alerts (594) and rare red warnings were issued for many locations in England, Scotland and especially Wales. There were more flood warnings and alerts in force in England than any day on record.

40,000 travelers were affected by the disruption on air, rail and road networks and more than 700 homes in westerly Cornwall were left without power.

Storm Dennis wasn't the only extreme weather event to create havoc in February 2020, with large areas of the country also hit by Storm Ciara and Storm Jorge.

Communities in the Midlands and west including Ironbridge, Shropshire and Worcestershire were submerged when the River Severn burst its banks. Some places saw more than seven inches of rainfall in a single weekend.

The concern is that this is just the beginning of the UK's freak weather. Flooding in autumn, heat waves in summer and frostless winters could become commonplace as man-made climate change advances. While major floods would have previously only occurred every 100 years, they may start to happen every 10 to 20 years.

With the UK weather becoming more extreme and harder to predict, London plans to invest 1.6 billion in a weather supercomputer that will be 6 times better at forecasting storms than the current one and will be operational at the end of 2022.

Many visitors to London and the UK as a whole are surprised by the length of the days in the height of summer and surprised by their brevity in the winter. Due to its northerly latitude, summer days are long and winter days are short.

If you head to the very north of Scotland in the height of summer you will find the days play host to 18 hours of sunlight, and even when the sun does set, night doesn't properly set in, leaving a prolonged twilight - similar to the 'midnight sun' effect in northern Norway, Sweden and Finland.

Does The UK Get Tornadoes?

The UK Met Office report that an average of 30 tornadoes occur in the UK every year, which they estimate to be more per sq km than the USA, but not more tornadoes in total. UK tornadoes are usually much weaker than the ones in the States. But there have been a few notable exceptions...

The strongest tornado recorded in Britain was an F4 tornado, which battered Portsmouth on 14 December 1810. It had a top speed of between 213mph and 240mph.

In more recent years the strongest UK tornado was the 2005 Birmingham tornado. On 28 July the tornado formed in the Sparkbrook area of the city and the Met office estimated it had top wind speeds between 93-130 mph and uprooted an estimated 1,000 trees and lifted the roofs off buildings,  causing an estimated £40million of damage.

In January 2020, a tornado hit Barton-On-Sea, a clifftop village in Hampshire. Walls were knocked down, tiles came off roofs and fence panels were blown out.

Can You Swim In The Sea in The UK?

Swimming in the sea around the UK requires some courage, despite the warming effect of the Gulf Stream. It is considerably warmer in the very south than the very north, but even in the south temperatures are more bracing than pleasant. The North Sea is colder than the North Atlantic so it also tends to be warmer in the west than the east.

The average water temperature of the British Channel at Brighton on the south coast peaks at 17°C in August, and gets to its coldest of 8°C in February. 17°C is just about warm enough for a very refreshing swim, and thousands of obstinate Brits dive in every summer. If you're not from northern Europe, you might find this absurd. 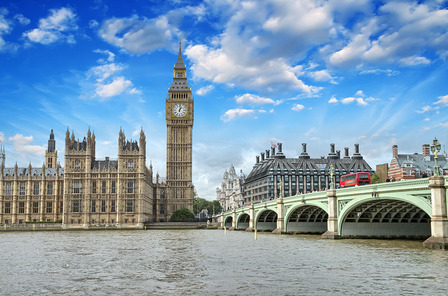 Scotland lies in the north of the United Kingdom and makes up the northern third of Great Britain. To the south, Scotland shares a border with England. Its north and western coasts are with the Atlantic Ocean and its eastern coast is with the North Sea. Scotland has 790 islands which belong to four groups: the Inner Hebrides, the Outer Hebrides, Shetland and Orkney.

While temperatures in Scotland are, on average, lower than England, the influence of the Northern Atlantic drift keeps temperatures warmer than other locations lying at similar latitudes. The North Atlantic Drift is the northern off-shoot of the Gulf Stream which is a current that brings warmer waters up from the tropics, keeping winters mild but wet.

As you move further north, winter conditions get slightly more extreme - as they tend to when you move to points of higher altitude. Scotland's most populated area lies in its central lowlands. In Edinburgh, the winter average maximums sit at about 6°C, while the summer average maximums generally sit at 18°C.

The west coast of Scotland is warmer and wetter than the east coast, due to its proximity to the Gulf Stream, and the southwest direction of winds from the Atlantic. In the west lie the Western Highlands, which is the wettest place in all of Scotland, seeing 3000mm precipitation on average per year.

The high rainfall combined with the warmer temperatures means that parts of the west can get particularly humid in the summer months. When you move away from the highlands, precipitation decreases dramatically – seeing an average of 800mm annually. In the highlands, much of the annual precipitation is made up of winter snowfall. However, there aren't really any ski resorts in Scotland as the mountains aren't high enough. Snow is much less common in the lowlands. Some winters see no snow at all.

On 28 December 2019, a temperature of 18.7ºC was recorded in Achfary - the warmest December day recorded in the United Kingdom. The unseasonably warm conditions were created by atmospheric conditions knowns as the Foehn Event.

What Is The Foehn Effect?

The Foehn Effect occurs when warm conditions are created when wet and cold air on one side of a mountain causes warmer drier conditions on the other side. Dry air heats more quickly so as it descends it warms up much faster than on the cold side.

The previous top December Record was  18.3ºC also in the Scottish highlands recorded at Achnashellach in 1948 - again created by the Foehn Effect. 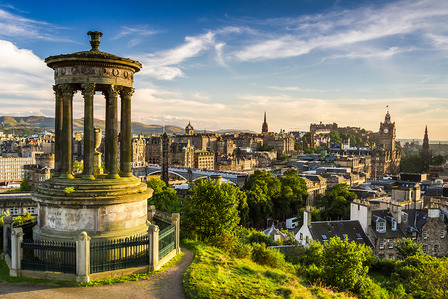 England is mostly flat with the Pennines to the north, and a couple of hilly districts such as the Lake District and the Peak District being exceptions to this rule. Again, the southwest Atlantic winds mean it is wetter in the west than the east, and more southerly latitudes tend to be warmer. Locations further inland are less affected by the moderating effects of the ocean and enjoy slightly warmer summers and cooler winters than coastal areas.

St Ives, on the southwest coast of England, sees average highs of 18°C in the height of summer and average highs of 8°C throughout winter, and an annual average of 1083mm of rain. Broadstairs, on the southeast coast of England, has average highs of 22°C and 7°C in summer and winter respectively, and an annual average of 416mm of rain. This demonstrates the moderating effect of the southwest Atlantic winds; how the moisture they carry starts falling as soon as they hit land, so lessening as they travel east; and the cooler temperature of the North Sea.

Snow falls most winters, but generally only on a few days and some years only on high land. 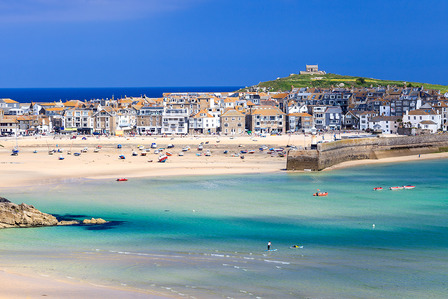 Wales sits on the central west coast of Great Britain. Its landscape is mountainous so there is quite a bit of regional variation. Temperature drops with increases in altitude and the southwestern faces of mountains are wetter than northeastern faces. Locations lying to the northeast of mountains are often slightly drier than those on the southwest as they are afforded protection from the southwest Atlantic winds. Again, temperatures rise in more southerly latitudes.

Wales is generally wetter and cloudier than England as it is further west. It rains very regularly and more heavily than further east in the UK, throughout Wales, especially on the coast. It is rare for it not to rain more than half of the days in each month. While many would simply consider this a bit of a pain, it has contributed to Wales' famous green landscape.

Statistics say that clouds completely cover the sky over Ireland for roughly half the time. Generally, conditions are much the same as you'll find anywhere in the UK, with the same regional variations of easterly areas being drier and southerly locations warmer. However, it is small, largely flat and with a relatively long coast in comparison to its land surface area, so there is less regional variation.

Temperatures see little variation across Northern Ireland, but the east is sufficiently protected from the southwesterly Atlantic winds by land to its west to create a significant difference in rainfall. 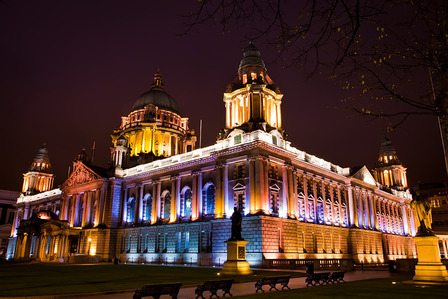