Morocco is about the size of France and lies on the north-west of the African continent with coasts upon the Atlantic and the Mediterranean Sea. The coastal regions generally have a Mediterranean climate. However, as you move further inland the conditions become more extreme and elevation plays a role in the changeable weather conditions.

The country is basically split into three different regions: a narrow coastal belt which is home to a typical Mediterranean climate with mild winters and hot summers; there is then the interior region which consists of the Atlas Mountains and plateaus; and the southern fringe which sees the Sahara extends to the coast and exhibits arid, desert conditions. Morocco also shares a long Eastern border with Algeria; the conditions here are the same as those on the other side of the border. As you move from north to south the conditions change quite dramatically; this is also the case as you from west to east - moving inland away from the coast.

In the very north of Morocco along the Mediterranean coast (in very close proximity to the Iberian Peninsula/Spain) the weather is the Mediterranean. The towns of Tangiers and Tetouan are perfect examples of this, each seeing long enjoyable summers that begin in mid-May and continue right through until the end of September, and shorter winters in which the region sees most of its annual rainfall. Tetouan lies 60km east of Tangier and sits at the foot of the Rif Mountains in the midst of an orchard belt. Most people will tell you that Tetouan is more picturesque than Tangier, but both towns have a favourable climate. The enormous Rif mountains lie towering behind Tetouan which makes for many stunning views. The beaches in this region, while warmer, have a tendency to be slightly dirty.

In this area, summer averages sit in the mid-20s, with daily highs reaching into the high 20's. Spring and autumn both see daily averages in the low to mid-20s, and the daily minimums rarely fall below 10°C. Winter time sees enjoyable daily highs of 16°C to 17°C - though keep in mind that autumn and winter are when the rainfall picks up.

See here for the annual weather averages for Tangier, which are almost identical to the conditions in Tetouan. 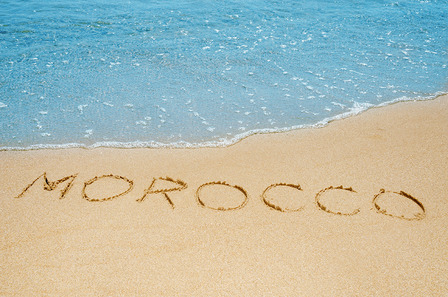 Once you hit the Atlantic coast on the west, the weather is tempered by the waters of the Atlantic - more specifically the Canary Current which brings cold waters into the area. O the northwest coast the conditions are still Mediterranean, though the colder waters do have a moderating effect on the climate; it is cooler, wetter and windier. In the summer this is often considered preferable to the scorching heat on the north coast. North-western Morocco lies in the path of the Atlantic depressions, which means that in the winter time it is not uncommon to experience several days of very heavy rainfall. However, this is a desert country and rainfall is never particularly high. In fact, it is very low and falls in very short showers. You are more likely to experience a sandstorm than a rainstorm.

Moving further south down the West coast you will hit Morocco's capital city of Rabat, and further to the south is Morocco's larger and more economically significant city of Casablanca. Rabat sits on the Atlantic Ocean and sees pleasurable weather year round. June and September each see daily averages of 20°C and 22°C respectively; July and August (the warmest months) see a daily average temperature from 23°C. Summers do get hot, average highs of 26°C to 27°C, though the cooling winds off the Atlantic Ocean blow in the evenings bringing temperatures down to an enjoyable 15°C to 16°C.

Camel on the beach on the Atlantic coast, Morocco.

Winters in Rabat and Casablanca are much more enjoyable than the UK in the winter months. With temperatures very rarely falling below 8°C, and daily highs of about 17°C to 18°C, this region is a great winter escape.  Spring and autumn each see highs of about 20°C to 22°C.

The Atlantic coast has much colder waters than the northern coast. And as you move further south down the western coast of Morocco you will find that the waters become much rougher - a result of the Atlantic depressions. So you may be fighting with the waves at times. Ignoring the choppy waters, the beaches here are much cleaner than on the Mediterranean coast.

Moving further south the weather starts to warm up a lot as you move toward the Sahara desert and toward the nation of Western Sahara. The climate in this region can exhibit bizarre patterns at times as the hot air off the desert hits the cold air of the Atlantic. As a result, there can often be mist and fog along the coast.

Agadir is a resort town that lies in the middle of the Moroccan Atlantic coast. Here the average temperatures are in the 20's all year round, making it a very popular tourist destination. The town was once previously destroyed entirely by a severe earthquake; it was rebuilt about 3km south of the original spot. You won't find any ancient architecture here; most of the buildings are modern and there a lot of resorts and hotels, making it feel like a purpose-built resort town. It still has beautiful beaches. 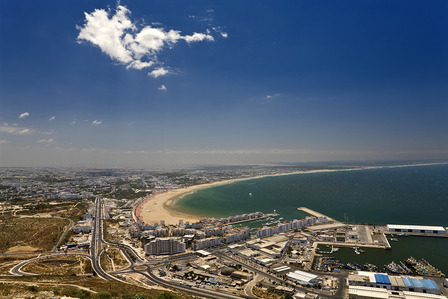 Morocco. Agadir. Aerial view of the city seen from the old kasbah hill.

See here for an overall guide on Agadir.

Once you reach further south the conditions are much arider and desert-like, particularly when you reach the very south desert town of Tan Tan. Here the Sahara enters Morocco and reaches right to the ocean. Temperatures here are hot year-round, only slightly cooled by the Atlantic sea breezes.

As previously mentioned conditions can get quite harsh once you reach the interior of the country. In the Moroccan Sahara, as you move away from the coast, temperatures reach real extremes. In the summer it is very common for daytime temperatures to hit the high 30's or mid 40's while nights are still hot around 20°C. In the winter daytime highs are mild in the high teens, though it can get into the mid-20s, and night times can see temperatures below freezing.

Marrakech lies in Morocco's interior. In the winter the average temperature is a very enjoyable 21°C, while in summer the average high temperature is a blistering 38°C. Marrakech is a great place to visit outside of the summer months but between June and September you may find it too hot. Marrakech is home to one of the wackiest central squares in the country - in this square, you will find performers putting on crazy street acts and endless food stalls. It is typically Moroccan and well worth a visit.

Camel with herdsman in the Sahara desert, Morocco.