Mauritius is an island that lies off the coast of Africa in the south west of the Indian Ocean. It sits 900km to the east of Madagascar and the Republic of Mauritius is in fact made up of several islands including the main island of Mauritius, the island of Rodrigues, the Agalega islands and the Cargados Carajos Shoals. The islands of Reunion and Mauritius make up the Mascarene Islands. Mauritius is the most densely populated country in all of Africa- with a population mass of 610 people per square kilometre.

The beautiful island, one of the richest countries in Africa, is one of the leading tourist destinations in the world, receiving approximately seven million visitors across the year. It plays host to some of the most spectacular beaches in all of the Indian Ocean such as Grand Bay, Belle Mare, Blue Bay, Le Morne and Tamarin and Flic en Flac. Mauritius has long been known for its amazing natural beauty, so much so that Mark Twain the famous author put it well when he said: "You gather the idea that Mauritius was made first and then heaven, and that heaven was copied after Mauritius".

The climate in Mauritius is largely tropical, though the humid hot conditions are moderated by the south-east trade winds that blow across the region. The island lies within the south tropical belt and because of its proximity to large masses of water (obviously, as it is an island) the tropical climate verges on maritime and temperatures see relatively small seasonal and diurnal variations. The topography of Mauritius is varied so you will see significant regional variations as you move up and down elevations and move in and away from the coast.

From November to MayMauritius swelters through a hot, wet and humid summer that sees daily averages sit at about 20° C to 28° C, and reaching into the 30's once you are on the coast. The central plateau in the heart of the island sees temperatures that are slightly cooler than on the coast, which makes it a great region for hiking and exploring the once volcanically active region. 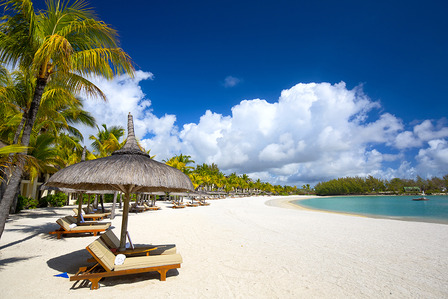 The period, particularly from November to April is when the island is subject to tropical hurricanes, so keep this in mind if visiting during this time. 1994 and 2002 have been the two worst cyclones in recent years when cyclone Hollana (94) and Dina ravaged the island.

The coastal region is generally about 5° C higher than the interior, though in the height of summer you can find relief from the heat in the beautiful waters of the Indian Ocean, which luckily sees temperatures of close to 27° C - far from chilly! Even in the winter months, the water temperature sits at an enjoyable 22 °C, making Mauritius a great spot to visit any time of the year. From January to March you will find Mauritius in the midst of its 'rainy season,' which is particularly noticeable in the Central Plateau.

FromMay through until NovemberMauritius enjoys a warm, dry winter- while it is only slightly cooler the conditions aren't as wet and humidity is slightly lower so it provides from a great winter escape. In saying this relative humidity is generally high throughout the year, particularly as you move into the centre of the island where daily average humidity sits over 90% across the whole year. The west coast of the island is generally the least humid where daily averages sit at about 75% to 80% throughout the year.

The largest city on the island is also its capital; Port Louis lies on the North West coast. Here you will find a vibrant island capital which is becoming increasingly cosmopolitan and plays host to a vibrant nightlife. However, if visiting Mauritius it will be worth your while to visit some of the smaller coastal towns and stay in one of the beautiful bungalows that you have long drooled over on postcards of Mauritius!

When visiting the island and surrounding regions keep in mind that its location close to the equator means that temperatures can often get so high that being aware of sunstroke and strong UV rays is a necessity. Be sure to pack plenty of light cotton clothing as the humidity in the height of the wet summer season can be somewhat oppressive at times.

Take the conditions on Port Louis as a fairly good indicator of what the yearly conditions are like on the island as a whole, though they are more representative on the conditions of the lower lying levels as at higher elevations conditions will vary. Port Louis sees its highest temperatures throughout December to April where daily highs set at about 29°C to 30°C and minimums very rarely fall below 23°C. Throughout the entirety of the year, the average hours of daily sunlight measure 7 to 9 hours per day with October to December seeing the most hours of daily sunlight.

As previously mentioned the 'summer months' are the wet season, so average precipitation is the highest during this period, with January to March seeing in excess of 200mm for the month and rain will fall on about 11 to 12 days in the month.

On the island as a whole, the south and south-east coasts are exposed to the prevailing southeasterly trade winds, so these coasts receive almost twice as much rain as the coast that Port Louis lies on. So in terms of rainfall Port Louis is a good spot to pick if travelling during the wet season because it receives the least rain of anywhere else on the island and the rainfall isn't as torrential- at higher altitudes, the rain that falls is strong and heavy.

Mauritius is seemingly devoid of off-peak and on peak seasons because it is a pretty desirable location at any time of the year. Though the Christmas-New Year period is generally much busier than any other time of the year. Also, keep in mind that August is when the French school holidays occur so the island does get slightly busier during this time and prices may be hiked to peak season levels.

Mauritius doesn't really have high and low seasons. The situation is more dependent on outside factors (such as the French school holidays, which cause a big increase in demand and prices in August). 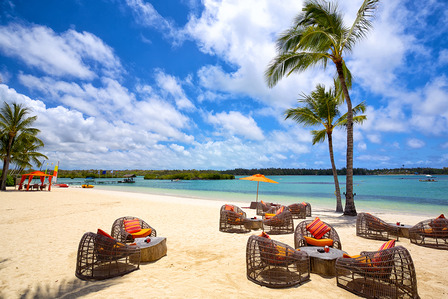