In France, you can get a taste of everything. There is the glamorous French Riviera with its Mediterranean climate; the temperate climate of the rolling hills of the wine regions of Dordogne and Aquitaine; Central France with its impressive historic architecture in Dijon, brings slightly more extreme conditions but also plays host to the picturesque French Alps to the south; lastly you have Paris and north and western France which has a pleasant, mild maritime climate of warm summers and cool winters.

The west coast of France has a temperate maritime climate. Due to the flat, low-lying topography of the large coastal plain, the moderating effects of the ocean reach far inland. Maritime climates generally have a narrow annual temperature range characterised by mild winters, warm summers and year-round precipitation. It is warmer than might be expected at this latitude due to the Gulf Stream.

Starting in the very north of France, a 90-minute ferry ride from Dover you will find Calais. Calais is the closest French town to the United Kingdom, only 34km from the English mainland, meaning that on a fine day the white cliffs of Dover are clearly visible. Obviously, as the region (Nord Pas de Calais) is the closest to the UK, its climate is very similar to south-eastern England, though temperatures have a tendency to be 1°C or 2°C warmer year round.

The summer months, from June through to September see the region at its warmest and it is not uncommon for the mercury to reach the high 20s or low 30s. The most rain falls in late summer/early autumn; summer could be considered the 'rainy season', but is generally drier than the southeast of England.

Once you move inland toward the Ile de France region, the temperature range begins to widen. Inland regions typically have hotter summers and colder winters than coastal areas as they are less influenced by the ocean currents and winds.

Paris¸ in the heart of the Ile de France region experiences the country's lowest rainfall. However, it still falls in quite high frequency. You can expect rain at any time of the year. April through until August sees the greatest rainfall, with May and June generally being the wettest months.

Summer in Paris and the surrounding region sees maximum average temperatures of 24°C to 25°C, with daytime temperatures in the 30s not being uncommon. Summer is sometimes affected by heat waves; Paris has been known to see days in excess of 40°C in the past. July and August see the hottest temperatures and it remains warm and sunny through until the end of September.

The Eiffel Tower in Paris, France.

If visiting the north of France during August, keep in mind that many locals take their summer breaks during this month so they often leave the north and head to the southern coastal towns for some well earned time off. So while the weather is pleasant and hot your time may be less than authentic as the ratio of tourists to locals is higher during this period.

Late September and early October see the north experiencing crisp autumn evenings. This can be the perfect time to visit if you're trying to avoid crowds, though keep in mind that October weather has a tendency to be unpredictable and can get quite chilly.

Winter across this region of France is relatively mild with inland areas seeing cooler temperatures than the coast. There is moderate rainfall across the regions and sometimes snow, though this rarely settles for long. In the Ile de France region, December and January generally see average maximums of about 8°C and average minimums of 2°C to 4°C. It regularly falls below freezing at night and frosts are common.

Winters can get very chilly, particularly when there is no cloud cover. However, the 2007/2008 winter was France's warmest and sunniest winter since 1950!

This region is very similar to the north Atlantic coast but is warmer and sees the majority of its rain in the winter. The region receives about 2,600 hours of sunshine per year. The combination of the Atlantic airstreams from the west coast with the continental conditions from the east and the north creates unpredictable, changeable conditions.

Starting at La Rochelle, a resort town located in the coastal heart of the Poitou- Charentes region, the weather is fairly typical of a coastal town. While it is not as warm here as in its French Riviera counterparts, it certainly does experience its fair share of hot summers days. Average summer temperatures sit at 17°C to 19°C from June to August, with temperatures in the high 20's frequent. The summer is also when La Rochelle and neighbouring areas receive the least amount of rain, though rainfall levels remain moderate, falling in short showers and thunderstorms.

Moving further south and slightly inland you will find yourself in the famous Aquitaine wine region. Bordeaux experiences slightly milder winters and moderate rainfall that is higher in the winter months, similar to Mediterranean regions. December is when the region records its highest level of precipitation, averaging 109 mm.

February to August will see Aquitaine at its driest, however, there are still 12 - 14 rain days per month which isn't hugely different from the 15 to 17 rain days that are typical of the autumn/winter months.

As you head into inland France the weather becomes slightly more extreme; you experience greater variation between the seasons. The area experiences colder winters than the rest of France and there is a greater chance of snow than in the northern and western parts of the country. Rainfall is highest in the summertime, falling in the form of thunderstorms.

Once you are within the Dordogne region weather conditions go a bit haywire. Within the region, the temperature and rainfall can vary significantly within quite a small area. This occurs because as you head from southwest to northwest the height above sea level rises - as a result, the north receives greater rainfall than the south. In the south-west of the Dordogne, an annual average 750mm of precipitation is recorded, whereas an average of 1160 mm annual precipitation is recorded in the north. Generally, Bergerac is the driest area in the region.

The Pyrenees see winters with temperatures way below freezing and heavy snowfall. As you head east along with the mountain range the precipitation (rain and snow) levels decrease. For examples, the East Pyrenees, unlike the West, doesn't have enough snowfall to support the formation of glaciers.

Dijongenerally has cold dry winters and warmer summers. Winters in Dijon have been known to be harsh and humid, so girls - pack your hair straightens and anti-frizz spray! The town is situated within the Burgundy region which is characterized by pronounced seasonal variations. It generally rains all year round, though this is broken up by periods of beautiful sunny weather. Spring is the best time to visit and conditions are mild and rainfall is minimal. Summertime sees the mercury rises, yet the conditions are rarely extreme and the temperature will generally hover around the late 20's.

Burgundy is characterized by a semi-continental climate, however in parts of the region weather conditions are more typical of an oceanic climate, and as you head further south toward the Mediterranean the weather becomes, well... more Mediterranean!

Once you hit Lyon the conditions vary quite dramatically from Dijon. Lyon's weather is affected by the Mediterranean and by the adjacent mountain ranges and the cooler Rhone Valley. Summer conditions are warm and muggy, with average highs of 27°C. Throughout winter the daytime temperatures can get pretty chilly, hovering around about 7°C. In the winter months, the region is surrounded by picturesque mist (or 'fog' if you want a less picturesque term!) This can often linger through into the spring.

A Mediterranean climate is witnessed in the Rhône Valley south of Valence and the coastal areas of Languedoc and Provence at the foot of the southern Alps.

The glamour of this region is enhanced by a glorious Mediterranean climate of hot summers and mild winters. The scorching summer days are broken by the evening sea breezes which waft over the city and provide a cooling breaking from heat, ideal for enjoying this picturesque area. 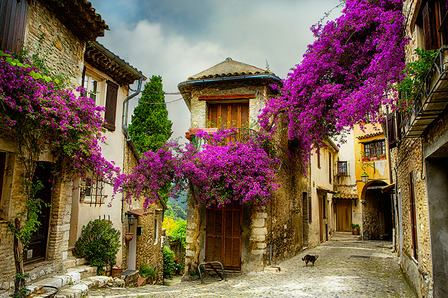 Along the coast, summers are hot, with scarce rain for a 3 month period in the middle of summer. However, when it rains it pours and often thunders. Sunshine is plentiful - up to eleven or twelve hours a day in summer and around five in midwinter.

Winters in the region are generally mild and sunny but this pleasant weather is often interrupted by very unsettled cold and blustery weather brought in by the famous northerly 'mistral' wind. The mistral blows with particular strength through and around Marseille and through the Rhône Valley.

The mistral wind can often bring unseasonably cold weather for a few days in spring and can have you wondering if you've just travelled back into winter. The majority of the Côte d'Azur is much less exposed to the cold blasts of the mistral and much of the region (including Corsica and Monaco) is moderated by the warm waters of the Mediterranean.