At almost three million square miles, Australia is the sixth-largest country in the world and so has very diverse geography and climates. Much of Australia's landmass is desert but there are also rainforests and snow-capped mountains.

The island of Australia makes up the majority of the Oceania continent. There are many different climates to be found across the country; from arid desert climate; to tropical; to coastal temperate; to alpine. The majority of the population lives in the coastal regions. One thing Australia is renowned for its sunshine and its reputation is well-earned.

2019 saw the hottest year on record for Australia. Topping the Bureau of Meteorology's charts for average and maximum temperatures as well as the lowest annual rainfall across the country. The year that delivered crippling drought, heatwaves, temperature records and devastating bushfires was 0.19C hotter than 2013, the previous record holder.

When Was Australia's Hottest Day On Record?

On 18 December 2019 Australi experienced its hottest day on record with an average maximum temperature of 41.9, beating the previous record that had been set the previous day/p>

This region of Australia experiences a temperate climate. The climate and relative fertility of the region make it easily the most populous area of the country. It includes most of Australia's largest cities: Sydney, Melbourne, Canberra, Brisbane and Adelaide.

The temperate climate region covers mainly Victoria, New South Wales and the Australian Capital Territory, but also the south-east of Queensland and the south-east of South Australia. The climate here is typified by warm summers and mild winters. Rainfall has a fairly even spread, though it is a bit higher in the first half of the year.

Sydney's climate sees summer highs averaging 26°C and winter lows averaging 8°C or 9°C. (Remember Australia is in the southern hemisphere so the seasons are reserved from those we experience in the northern half of the globe).

It commonly reaches into the 30s during good summer weather and heat waves may even see temperatures rise to 40°C. Rainfall averages about 1200mm a year; there are about 140 days with rain each year. January to June is the wettest period with monthly rainfall between 100 and 130mm, while the rest of the year is slightly drier. September is the driest month with about 70mm average. You can see a detailed overview of Sydney's weather across the year here and find monthly weather averages here.

Sydney's climate is typical of the region, though as you move north summer temperatures can be a little hotter and as you move south winters get a little cooler. Melbourne, the most southerly city of mainland Australia, can see winter lows drop to 5°C or 6°C. The cooler temperatures are due mainly to the cooler seas towards the south pole; cold snaps happen when cold winds and currents travel up from Antarctica.

Does It Snow In Australia?

Extreme cold snaps are rare but can occur; in 2005 Melbourne saw snow on its beaches. Sunshine is abundant in this part of the world and summers are long and hot; hence the sun, sea and surf reputation of the region.

Inland from the coast, temperature extremes are greater. Due to the lack of the temperate sea breezes, it can drop to freezing and summer heat can soar. Canberra, the capital, sees winter lows averaging 0°C or 1°C while summer highs are a touch higher than on the coast. Snowfall is not very rare, and in the hilly areas such as the Blue Mountains west of Sydney, it falls each winter.

The main mountains of the country, the Australian Alps, lie further south, to the northeast of Melbourne straddling the border between Victoria and New South Wales. The highest mountain, Mt. Kosciuszko at 2228m, is not particularly tall but is high enough to see snow cover for a few months each year. There are even ski resorts in the area such as Thredbo. The ski season can last from June to September.

Central Australia experiences a harsh desert climate and supports just a tiny proportion of Australia's population. Deserts occupy almost 45% of Australia's land and are prominent in the centre and North West.  Summers are extremely hot, with temperatures generally between 32°C and 40°C during the warmest months. Winters are warm with temperatures between 18°C and 23°C. Rainfall in the desert is very low – around 200mm to 250mm per year.

Western Australia is predominantly arid desert, experiencing the same climate as central Australia. The coast enjoys more comfortable weather; the temperature doesn't get as high in summer and more frequent rainfall makes the area more fertile. Perth sees summer highs above 30°C and winter lows around 8°C. Rainfall is low except for in winter when a short rainy period occurs. For an overview of Perth's weather look here and for average temperatures look here.

This is another sparsely populated region of Australia. A tropical climate prevails here, with high temperatures and more abundant rainfall. Being relatively close to the equator, temperatures are high year-round with little seasonal fluctuation. In Darwin, the main city of the Northern Territory, average temperatures vary between 25°C in winter and 30°C in summer. Rainfall is abundant but very seasonal; it's high in the summer months – up to 400mm a month, but very low in winter. 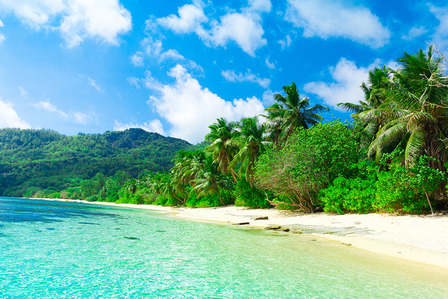 Rainforests cover the northern part of Queensland where rainfall is amongst the highest in the country. In June 2019 Stanthorpe, a town 135 miles south-west of Brisbane, saw the first significant snowfall since 2015.

The island of Tasmania lies around 240kms off Victoria's south coast. It is Australia's most southerly region and therefore sees the coldest temperatures; average temperatures in the capital Hobart are 8°C in winter and 17°C in summer. Cold snaps can occur when cold weather comes up from the Antarctic. The weather is highly variable due to the exposure to winds and seas.

The highest temperature recorded on the island is 40°C and the lowest -13°C. Rainfall is greater than on the mainland and is at its highest in winter in the hilly central regions, which can average more than 2500mm per year. The north coast, where most of the population resides, is the driest place on the island with around 700mm per year. In the central hills snow falls each year and temperatures drop below zero quite often.

Droughts and Bushfires in Australia

Several weather-related natural disasters occur in Australia. The most common and problematic of these are droughts and bush fires caused by long dry summer spells. Eastern Australia is the most susceptible to bush fires. Dry summers can be a common occurrence in Australia and water supply is a constant worry.

Regions also come under drought risk when there have been particularly dry winters and springs, the seasons normally relied on for most of the rainfall. As the population increases, droughts become more and more of a problem as this predominantly dry island struggles to cope with the water demands of a growing population.

Cyclones are a risk in the coastal regions of the northern part of the country. These violent storms can cause severe flooding, structural damage and loss of life. Although they are not particularly common, they are a threat each year between December and April.