Lying just 13° north of the equator, Barbados enjoys a hot tropical climate with two distinct seasons – wet and dry. The wet season begins in May/June and runs through until November/December. Little rain falls during the rest of the year, especially in the driest period between February and April, though as a tropical island the odd storm can never be ruled out. Temperatures are generally very very little with average highs sitting just below 30°C and average lows in the mid to low 20s.

Barbados sits in the Atlantic hurricane belt and is at risk during the hurricane season from June till November. However, hurricanes tend to strike the islands further north more frequently. On average Barbados is struck by a hurricane only once every 25 years. The last one to strike was quite recent – Hurricane Ivan in 2004. Although not at its strongest, it was still a category 3 hurricane when it passed Barbados and claimed one life on the island.

Barbados is a relatively flat island with just a few hills in the middle, the tallest of which, Mount Hillaby, stands at 336m above sea level. This relatively unvaried topography means that there is little climatic variation across the island. However, rain is heavier in higher areas and the northwest Atlantic coast tends to be a little rougher than the Caribbean southeast.

Low rainfall and clear skies can be expected throughout the dry season. This is the most popular time to visit the island due to the absence of rain, slightly lower temperatures and lower humidity. The average high temperature is at 28°C for most of the season with average lows sitting at 23°C. The low humidity levels of the dry season help to keep the heat enjoyable rather than sticky and uncomfortable. The northeast trade winds also provide a cooling breeze. The water temperature gets down to around 26°C which is still more than warm enough for the endless swimming, snorkelling and windsurfing you'll be tempted to partake in. The sun comes out for nine hours a day on average but the odd day will see a haze high in the sky. Rainfall is exceptionally low for a tropical island between February and April while in December, January and May you're bound to see a few showers. These are brief so would not hinder you for long. They can also bring momentary respite from the heat. 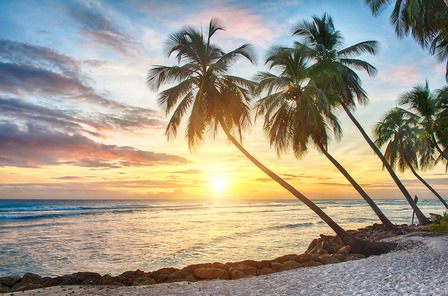 Sunset over the beach in Barbados.

Frequent rain and the chance of hurricanes are what put people off from visiting during the wet season, but it still has a lot to offer. The average high temperature sneaks up to 29°C and the average low follows to 24°C. While this is a minute difference the slight increase in humidity makes it feel like quite the change. High humidity takes some getting used to; visitors will relish their air-conditioning. The sea temperature gets up to a bath-like 28°C. The likelihood of being hit by a hurricane is very low but is at its highest in August and September. Before travelling to this area during the wet season a check on hurricane activity in the area is a must. Hurricanes passing nearby will also drastically affect weather on the island, causing tremendous storms with ferocious wind speeds and deluges of rain. Flash flooding and disruption of transport are regular effects of a bad storm. Hurricanes or not, rainfall is high during the wet season. Storms are generally very heavy but very brief and so days full of sunshine are still to be had; the wet season only sees one hour less of sunshine per day on average in comparison to the dry season.

Travelling to Barbados in the wet season needs to be approached with some intelligence; check before you go and once there take the advice of the locals. Islanders are well experienced in what to do in the event of a hurricane. More likely than not, you will have plenty of carefree days on the beach and all for a bargain price.

Barbados is an independent island nation situated near the point at which the western Atlantic Ocean meets the Caribbean Sea, about 250 miles north-east of the South American mainland. The name Barbados comes from the Portuguese, meaning 'bearded ones'.

It is the most easterly of the Caribbean Islands and makes up part of the Windward Islands that include Martinique, Saint Lucia, Saint Vincent, Barbados, Grenadines, Grenada and Dominica.

Barbados has become justifiably famous as a world-class tourist destination thanks to its incredible beaches and fantastic climate. Bridgetown, on the south-west coast, is the capital city and largest town on the island. The popular town of St. Lawrence is a little further down the coast. Other popular tourist spots include Speightstown and Holetown on the west coast and Bathsheba on the east coast.