The weather across Croatia doesn't vary dramatically from north to south through it is generally warmer towards the south. The climate does change from continental to the Mediterranean as you move toward the Adriatic Sea and the equator. The sea has a moderating influence that keeps winters warmer and summers cooler than might be expected.

The Dalmatian coast and the offshore islands of the Adriatic are Croatia's most well known, and most visited, tourist destinations. Whether you choose to start your journey in Split, at the top of the Dalmatian coast, and sample a few islands before ending in the amazing walled city of Dubrovnik, or pick one spot and relax for a week or two, you are bound to be astounded by the beauty of Croatia's landscape. The Dalmatian Coast is home to a Mediterranean climate that boasts long hot summers and mild winters. Atypical of a Mediterranean climate, rainfall is generally moderate year round towards the north but towards the south, it follows the Mediterranean dry summer wet winter pattern to a greater extent.

The most popular time to visit the region, and when the most suitable weather occurs, is during the summer months from June to September. Summers along the coast and in the islands see about 10 to 12 hours of sunshine per day and temperatures in the mid to high 20's, occasionally reaching into the 30's in the very height of summer. Croatia boasts very low humidity, sitting at about 60%, so even in the scorching sun the heat is bearable; you are also never far from the crystal waters of the Adriatic which you can dive into to cool off. 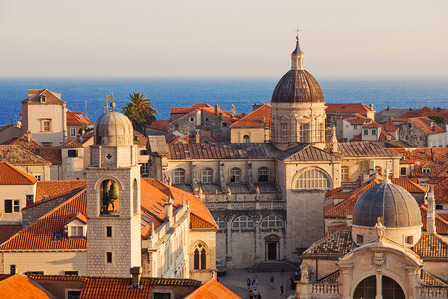 Dubrovnik, in the south, sees minimums throughout the summer of about 14°C to 16°C and maximum daily temperatures of 25°C to 28°C. In this season the city only sees about 3 to 6 days of rain per month. July is, on average, the driest month in the area; July only records about 26 mm of precipitation. Much like the Greek Islands, this popular tourist area becomes somewhat of a ghost town come wintertime. While the islands may close down and many businesses may shut their doors, trips to the bigger cities of Dubrovnik and Split are still enjoyable as there are a lot of sights to take in. 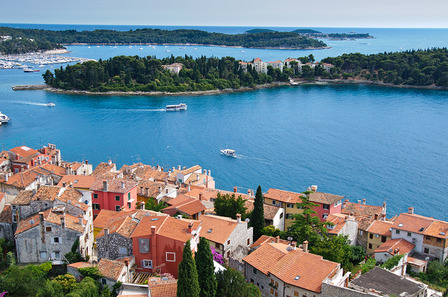 Keep in mind that winters see significant rainfall and the hours of daily sunshine fall to about 3 to 5 hours as the sky becomes overcast and the rainfall consistent. On average, each month throughout winter will experience about 13 to 15 days of rain per month; November is generally the wettest month of the year. Minimums will sit at about 0°C and maximums at 7°C in the coldest month of January. On the coast, subzero temperatures rarely occur. A little way inland it regularly falls below freezing and frosts are common but snow is still rare.

Brac is one of the Adriatic islands; a beautiful spot to visit if you take one of the ferries from Dubrovnik, Split or one of the other islands. Hvar and Korcula are another two islands that are recommended with the glitz and glamour of Hvar rivalling Monte Carlo as the playground for Europe's rich and glamorous. Korcula is the birthplace of Marco Polo so there is plenty of history on top of the amazing scenery. 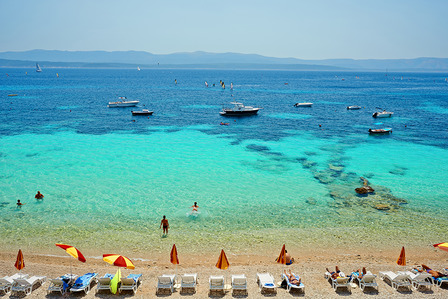 Brac boasts 134 days of clear sky per year and the temperature falls below 0°C only once every 3 years. In July and August, the average daily temperature sits at 24°C which is the same temperature as the water surrounding it – perfect for swimming diving, jet skiing or simply lying on one of the many beautiful beaches.

The very north of Croatia is home to the Pannonian Plains, which are lowlands that hold a continental climate with hot summers and cold winters. Within this region, you will find the country's capital city of Zagreb. See here for average conditions in Zagreb.

Central Croatia becomes mountainous as the Dinara mountain range takes over the terrain. This area hosts an alpine climate and large forests with the average winter range spreading from -5°C to freezing, and 15°C to 20°C in the summer months. As you move into Croatia's interior and head toward Serbia, conditions become more extreme as you leave behind the moderating influence of the Adriatic Sea. Varying altitude has an effect on the weather; at higher points on the Dinara Mountains, you can find snow cover for much of the year.

Moving further to the east the mountains lessen and the terrain melts into the low-lying valleys of the Danube. Here, in winter it is much colder and there is significantly less rainfall all year round.