Cuba is an island nation lies in the Caribbean Sea. Like its neighbours, Cuba has a tropical climate that is split into two seasons, one wet and one dry. However, year-round it is generally hot with regular rainfall and high humidity, but also with plenty of sunshine.

Cuba is part of the West Indies, the island chain that curls up from the north coast of Venezuela, past the southern tip of Florida and towards Mexico's Yucatan Peninsula. Cuba's position in the Caribbean between the North Atlantic Ocean and the Gulf of Mexico, northwest of the Windward Passage, means its climate and day-to-day weather conditions are greatly moderated by the local trade winds. It also means that Cuba is in the path of Atlantic hurricanes.

The Republic of Cuba consists of the main island of Cuba and four smaller groups of islands: the Colorados, the Sabana-Camagüey, the Jardines de la Reina and the Canarreos.

The dry season is the most popular time to visit Cuba. It rains much less and because of this the temperature and humidity drop making conditions much more comfortable. The average high temperature creeps out of the thirties and into the mid-twenties, and it cools down in the evenings, reaching average lows in the high teens. It rains infrequently, on around seven days each month, but as this is a tropical location it does not rain lightly. Torrential downpours are more of Cuba's style. It is slightly less sunny in the dry season as clouds linger rather than emptying themselves and clearing away, but you can still expect a good seven hours of sunshine a day which is more glorious than gloomy. 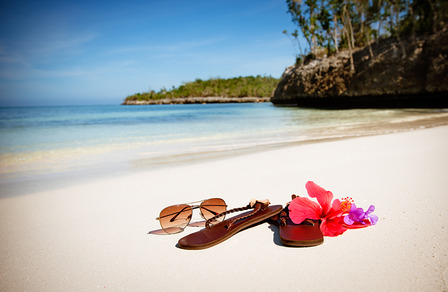 Cuba in the dry season.

Seventy-five per cent of Cuba's rain falls between May and October. On average, rain falls on just under half the days in each month, and it falls fast and heavy. High winds whip up ferocious storms and flash-flooding is a risk. The wet season coincides with hurricane season. Hurricanes are destructive and potentially life-threatening. They should not be shrugged off as unserious or unlikely. However, the peak of the season is in August and September and the risk is reduced in surrounding months. Sunshine levels improve; between storms periods of beautifully clear weather are the norm. The average high temperature sits in the low thirties, and at night the average low is in the low twenties. Combined with the high humidity caused by the high rainfall, conditions can be rather uncomfortable.

The island of Cuba extends for 750 miles and is home to over 200 bays and 289 beaches to explore. Cuba's terrain is largely flat and rolling, though in the southeast of the island you will find rugged hills and mountain ranges. The mountains reach up to 3000-6000 feet. The north has the flattest terrain and is where you will find the vibrant capital of Havana. Normally, rainfall is greater around mountains and lower in flatter, low-lying areas, as areas of higher elevation work as a barrier to rain-bearing winds. But in Cuba, the flat, low-lying north sees greater rainfall than the south due to the east and north-easterly direction of the prevailing winds. Within the north, the usual variation occurs and in the hilly parts, some years see in excess of 2500mm of precipitation across the year.

The temperature always decreases with altitude so as you climb higher in Cuba's mountains you will receive relief from the heat. The highest peaks of the mountains, in the Sierra Maestra range, even receive some snow.

The southeast of Cuba is the driest point on the island. It also happens to be where you will find the American naval base, Guantanamo Bay, which is the part of Cuba that is United States territory.

Western Cuba is affected in spring and winter by the waves of cold air which blow from the United States interior. These cold winds can often cause the mercury to fall below 10°C for one or two days, this is unusually cold for the Caribbean region. 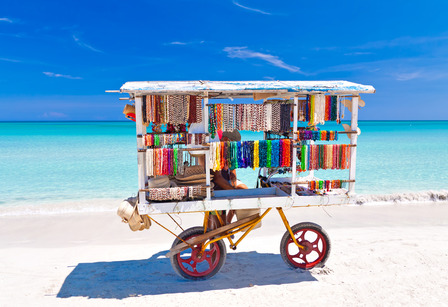 In most recent times Cuba was hit by Hurricane Wilma and Tropical Storm Barry (2007.) Tropical Storm Barry produced heavy rainfall across the western Caribbean Sea, which peaked in Cuba when 200mm of rainfall was recorded in one hit. Barry actually occurred in June which is unusual as this is very early in the hurricane season.

Hurricane Wilma occurred during the 2005 hurricane season and was the most intense hurricane ever recorded in the area (the Atlantic Basin.) The hurricane hit Cuba hard, causing over 350,000 people to evacuate in Cuba alone and caused $29.1 billion worth of damage across all affected areas.

Most of Cuba's modern buildings are built to withstand severe storms, including hurricanes. The island has become adept at dealing with extreme conditions, and evacuation procedures are in place, so you should be okay if you find yourself experiencing a hurricane. This does not mean that even a direct hit won't ruin your holiday. While you may be safe, flooding, damage to the landscape and older buildings, disruption to transport and uprooted locals are sure to cause more distress than you'd hope for on your average holiday. If you plan to travel to Cuba in hurricane season, you should be wary of staying in hostels and 'casa particulars' that might not be as well protected.

Starting on the north coast you will find Cuba's vibrant and electric capital city, Havana. Havana basks in pleasant tropical weather all year round. The position of Havana means that its climate is moderated by the trade winds and the warm offshore currents.

Havana extends predominately westward and southward from the main bay, which is entered through a narrow inlet that then divides into three main harbours: Atarés, Marimelena and Guanabacoa.

Home to 2.1 million people in its inner city, Havana is the largest city in both Cuba and all of the Caribbean. 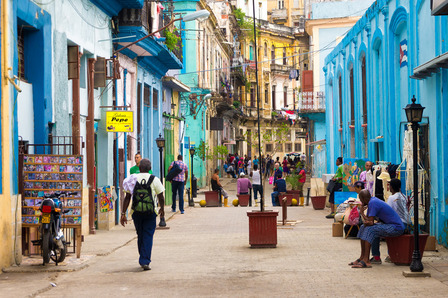 Average daily temperatures in Havana range from 22°C in the months of January and February to about 28°C in the midst of summer. Daily highs sit around 26°C in the dry season and 32°C in the wet season. You will very rarely see the mercury drop below 16°C at any time of year, though cooler days to come when the aforementioned cool winds from North America blow across the island. See here for a table of average daily temperatures across the year in Havana.

The lowest temperature ever recorded in Cuba is 0.6°C which occurred in Bainoa, a town that lies in the Havana province. Minimums in Havana very, very rarely fall below 10°C, and the coldest month across the year is January which sees an average minimum of 14°C. Across the rest of the year, average minimums will sit between 16°C and 22°C.

Rainfall will be at its heaviest throughout October and the 'dry season' lasts from about November through until April. But during February to April it is driest and there will typically be no more than 4 days of rain for each month, before picking up to 10 days of rain per month come June and through until August, before peaking at 11 days in the wettest month of October which typically sees 173mm of precipitation for the month, compared with 46 mm of precipitation in the driest months of February and March.

In saying this, however, July 2005 saw Havana torn about by Hurricane Dennis, when on July 8th 160 km/h winds created violent 10-foot waves which tore over Havana's sea wall and ripped through some of the cities old and derelict buildings. Hurricane Dennis caused damage to at least 5000 homes in the capital and surrounding areas. Unfortunately, 3 months later saw Havana hit again. In October of the same year, Hurricane Wilma caused severe flooding in the coastal regions.

Santiago de Cuba is the capital of the Santiago de Cuba Province which lies in the south-eastern part of Cuba. Santiago is a hilly city home to sloping streets and with the Sierra Maestra mountain range lying in its backdrop.

Santiago de Cuba has long been one of the most important cities on the island, second only to Havana, and it is also the second largest. Santiago is home to about 495,000 people and lies on a bay that is connected to the Caribbean Sea, making it an important seaport. Santiago, founded in 1514, was actually the original capital of the island and lies 780km from the present-day capital of Havana. The city boasts monuments and museums that are associated with Cuba's long and painful struggle for national independence.

Santiago is famed for its annual carnival and the 80,000-hectare Baconao Park which lies in very close proximity to the city, starting in the city and ended at the beautiful Baconao lagoon.

Santiago is in fact the hottest part of the island and sees much less seasonal variation in temperature. Even in the dry season the average high temperature only gets down to 29°C. It is drier here than in Havana so this heat is still bearable. Santiago sees two peaks in rainfall at the beginning and end of the wet season, one in May and one in October when around 200mm of rain falls on each month on average. 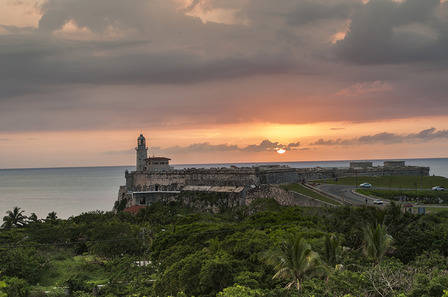 El Morro Castle at the entrance of the bay of Havana during sunset, Cuba.