The typical weather of Mexico varies as you move north toward the United States, West toward to the Pacific Ocean, East toward the Caribbean and South toward the Equator. It is these factors that affect the climate as well as varying elevations across the country. Mexico, lying in the middle of Central America and above South America is the most populated Spanish speaking country in the world- home to approximately 108,700,900 people 19,231,800 of those living in and around Mexico City, this country is a country which has a lot to see and experience.

Mexico City, the country's capital, lies in the centre of southern Mexico. Mexico City is home to a temperate "high land" climate, which results from its tropical location and its relatively high elevation. The south region of greater Mexico City sits at higher altitudes; as a result, this part of the city receives greater rainfall and sees a wider range in daily temperatures. As you move down into the valley rainfall decreases and conditions in winter are warmer. In Mexico City the average annual temperature varies from approximately 12°C to 16°C, depending primarily on elevation. Winter falls from December to February and this is when the lowest temperatures are experienced, reaching as low as -5°C. These chilly climates will often be accompanied by clouds of mist and trivial snow showers. However, in late spring and throughout summer the city swelters through maximum temperatures up to and above 30°C. This part of Mexico sees most of its precipitation concentrated into the summer months. As Mexico City lies at a high altitude, tourists to the city may take a few days to adjust to the lower atmospheric pressure as sudden exertion of energy can often lead to loss of breath, so keep this in mind when visiting and don't panic if you feel slightly off. 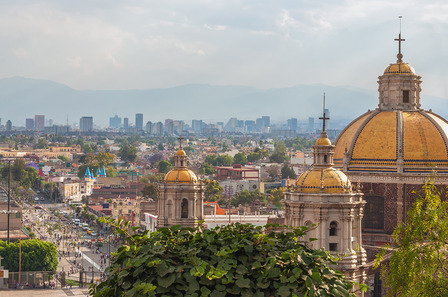 On the south-west coast of Mexico, you will find the port city of Acapulco, which is located upon a deep, semi-circular bay. Acapulco was built on a narrow strip of low lying ground between the coast and the vast mountain range encircles the bay to the north and to the east. Access to Acapulco from inland Mexico is through a two-kilometre tunnel through the mountains, constructed in the 1990s. A passage (Abra de San Nicolas) was constructed through the mountains that allow cooling sea breezes to reach the city. In Acapulco, you will find a tropical climate that remains warm year round. Rainfall occurs mainly in the months of June to August, while "winter" (December- February) is most dry and with plenty of sunshine.

The Tropic of Cancer effectively divides Mexico into temperate and tropical zones.

In the north of Mexico, you will experience cooler temperatures, mainly because you are moving out of the tropics but also because Northern Mexico is greatly affected by the presence of the United States to its north. When the cold arctic air flows down from the very north of Canada areas of Northern Mexico can get very cold, particularly during the winter months. South of the Tropic of Cancer conditions become increasingly tropical and there isn't a huge range in temperatures across the year. Temperatures will differ generally due to the vast alteration of elevation.

On the west coast of Mexico, temperatures are lower than on the east coast and interior and rainfall is also decreased. This is due to the influence of the cool California Current that sweeps through this division of the Pacific Ocean. When you combine this with the North Pacific Anticyclone which affects this region also, you will understand why the North West of Mexico can be somewhat desert like. The Baja California peninsula, however, and the popular tourist spot of Cabo San Lucas, plays host to a more Mediterranean climate, not too dissimilar to that witnessed in southern California. On the east coast of Mexico, you will find much more enjoyable weather conditions, which closely resemble the tropical conditions of the Caribbean. Conditions change as you head much further south and also east to west. Look at seasonal averages for Puerto Vallarta and compare them to the conditions in Cancun for a good understanding of the vast differences.

If wanting to visit for a beachside resort holiday then the best spot for you would be Cancun, which is on the East coast of Mexico, nearing the Caribbean on the Yucatan Peninsula which juts into the Gulf of Mexico. Cancun plays host to a typical tropical climate that has a wet and dry season and can be subject to tropical storms from August to October. 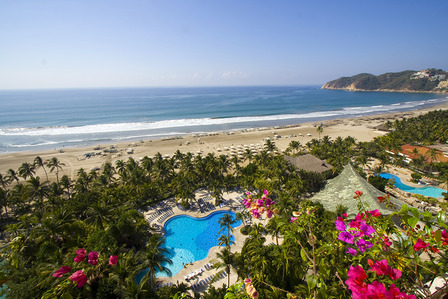 The east and west coasts of Mexico are both occasionally affected by tropical storms that have developed in the Pacific or more commonly in the Caribbean. These tropical storms consist of two or three days of heavy rain, however, the rain will rarely last for longer than this and you will be sure to meet with warm sunny conditions in the aftermath. These tropical storms are most likely to occur in the months of August to October, so if this is of concern to you then plan your trip outside these months. The east coast is more prone to hurricanes than the west.

On the whole, most of Mexico has sunny weather for the large majority of the year. The wetter parts of the east coast and the northern part of the Pacific coast are generally the cloudiest parts, as low cloud and fog are formed over the cold Californian Ocean current. In the interior, the land is much drier and witnesses a lot of daily sunshine - as much as seven or eight hours a day in the drier months to five or six during the wetter season.