The climate in Austria is extensively continental with the Eastern border of the country stretching into the Pannonian climate zone. It is typical for Central Europe to have cold winters; going down to minus 20°C during the night and hot and sunny summers; reaching up to 35°C throughout some days in August.

The greater region of Austria is situated in the cool and more temperate climate zone wherein humid westerly winds prevail. With over half of the country dominated by the Alps the alpine climate is the most principal temperature throughout the country. In the East, in the Pannonian Plain and along the Danube valley, the typical weather shows continental characteristics with a smaller amount of rain than the alpine areas. Although Austria is cold in the winter, in the summer areas surrounding the alps can still reach comparatively warm temperatures up to 20°C to 27°C.

The Alps separate Austria from its two more content local climates, generating a cooler area than any other of the region of the country. The alpine area in the West of the country has, in general, a much harsher climate. The valleys of Tirol, are known for the "Föhn" winds. Typically these mild breezes can quickly boost the temperature to a more pleasant climate. Rain is more common in the Alps and temperatures are lower. Due to altitude and global positioning; the Austrian Alps are typically colder than the Western Alps in Switzerland or France.

The Alps serve as a dividing line for Europe's three major kinds of weather systems that influence Austrian weather. It has the greatest influence on the northern slopes of the Alps, the Northern Alpine Foreland, and the Danube Valley.

The average temperature throughout this typical Austrian alpine climate stands at 0°C or commonly below. The climate becomes colder at the height and altitude elevates - this characteristic is described by the lapse rate of air: air will tend to get colder as it rises since it increases in capacity.

The north of the country has a distinctive continental climate. Because clouds from Germany regularly get caught in the airflow around the Alps, rain is more common in the north of the mountains in Salzburg, Upper Austria and the west of lower Austria. Salzburg is famous for its "Schnürlregen", stable and continuous rain that can go on for days and days. The continental climate is characterized by low-pressure fronts with precipitation in summer and high-pressure systems with cold and dry air in winter.

The beautiful city of Salzburg with Festung Hohensalzburg in winter, Austria.

Northern Austria, however, tends to have very low annual rainfall because little atmospheric moisture is available; and the temperature range can sometimes be very extreme on an annual base. Maximum average summer temperatures for the north area of Austria lingers around 20°C. During the winter there are several months when the temperature remains below freezing point. Precipitation decreases rapidly towards the north and also north-east. Annual rainfall averages 500 mm, and there can often be a threat of drought. The ground is also snow-covered for a number of months between October and April.

The region of the eastern parts of Lower Austria, Vienna and the Burgenland is influenced by the weather of southern Russia and Eastern Europe. This "Pannonian" climate is considerably milder than the one in the mountains of Upper Austria and makes great weather for raising wine and outdoor activities. This can also relate to a fourth region, the area south of the Alps in Eastern Carinthia and Styria, where the weather is mild and the summers are pleasurable; influenced by Mediterranean climate systems.  Vienna (located east), Graz (located south), Linz (located north) and Innsbruck (located west) are typical examples of the extreme variance in climate throughout Austria.

The typical climate of Vienna features mild summers and chilly winters, combined with rather placid and enjoyable temperatures in both autumn and springtime

The Graz climate is strongly influenced by the city's location. Located on the south-eastern wall of the Alps and practising warm weather all year round, visitors to Graz can anticipate warm summers that are not excessively hot. This season is soon chased by cooler autumn and winter weather.

The climate of Linz is described as mild and clement, with each season being relatively individual and easy to recognise. Linz is a particularly interesting city, with milder winters than many other locations around Austria, and warm summers.

The moderate climate of Innsbruck features very distinctive seasons, which change hastily and perceptibly. Winter weather in Innsbruck is cold, with freezing nights and heavy periods of snow. However, when the city hosted the Winter Olympics in 1964, there was in fact a rather unfortunate lack of snow and the Austrian army ended up transporting ice and snow from the very top of mountains.

On the whole; even with its location in a largely mountainous region, Austria has a temperate, continental climate, with an extensive variety of temperatures due to differences in altitude as well as the time of year. In general, the weather is changeable and largely unpredictable all year-round. 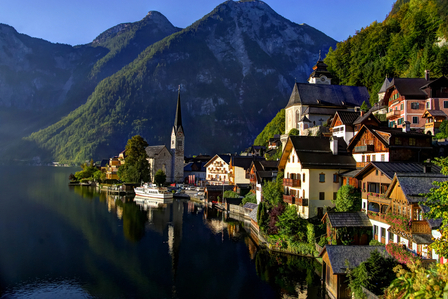 Hallstatt - the beauty of Alps Austria.