Sweden is in northern Europe and has a coastline that is met by the North Sea, the Baltic Sea and the Gulf of Bothnia. The Scandinavian Mountains create a natural boundary between Sweden and Norway to its north and west. Sweden's north-eastern border is with Finland and it is also linked to Denmark in the far south.

Due to Sweden's northerly latitude and diverse topography, its climate is subject to great regional variation. For the most part Sweden has a temperate climate with mild temperatures in all four seasons and is warmer than other areas at similar latitudes. However, milder temperatures are to be found near the coast while further north, closer to the Arctic Circle, sub-arctic conditions prevail. The sky is often overcast though rain is moderately low throughout the year in most places. As in other countries with regions this far north, such as its neighbours Norway and Finland, Sweden experiences huge differences in day length from summer to winter, and has been nicknamed 'Land of the Midnight Sun'. Daytime lengths become more extreme towards the north. Northerly regions are also treated to the arctic phenomena of the Northern Lights or Aurora Borealis. Sweden's climate is very similar to that of Finland.

Southern Sweden has a maritime climate. Almost entirely surrounded by the water and reaching into the Gulf Stream, this region receives much milder temperatures than might be expected of this latitude. This actually has an effect on the whole country, as do the warm prevailing westerly winds. Even within this region there is variation to be seen: it is milder towards the south due to the peninsula-like formation of the southern tip into the sea; it is wetter in the west due to the westerly direction of the wind. The summer months are the best time to visit the region due to the long daylight hours and warm temperatures. Peak summer months see days as long as seventeen hours while peak winter months see days of only seven hours. In the winter, precipitation generally falls as snow. 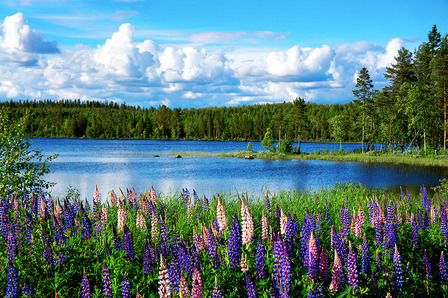 Malmo, in the furthest south region, sees an average low of -3°C at its coldest in February, and an average high of 20°C in the peak of summer in July and August. Rainfall varies very little seeing 65 mm in its wettest month November, and 32 mm in its driest month, February. Gothenburg, slightly further north on the west coast with the North Sea, sees similar average highs but with cooler nights and in the winter the average low gets down to -4°C. October is Gothenburg's wettest month seeing 88 mm of precipitation, while February is its driest with 41 mm. Slightly further north on the east coast with the Baltic Sea, Stockholm experiences a warm summer average high of 22°C in July, but it gets down to -5°C in the winter. July, Stockholm's wettest month, sees 64 mm of rain while its driest month, March, sees only 24 mm.

Central Sweden has a humid continental climate. Tropical air from the south wrestles with Arctic air from the north and this results in large seasonal differences, though tempered by the northerly latitude and the maritime climate to the south, and generally changeable weather conditions. This region sees lower precipitation levels as the Scandinavian Mountains act as a barrier to north and north-westerly winds, forcing clouds to form and rain to fall on the leeward side of the mountains. Overcast days are the norm and while rainfall is low it drizzles frequently. Winter months see regular snow that builds up and does not thaw till spring. The region sees summer days as long as twenty hours and winter days as short as five. Östersund, in the west of this region, is at quite a high elevation and so receives cooler summers than might be expected of a continental climate. The summer average high in July is 19°C while the winter average low in January is -12°C. Night time temperatures are cold throughout the year and frosts can actually occur at any time. Östersund sees 81 mm of precipitation in wettest July, while February, the driest month, sees 25 mm. Umea, further north on the east coast with the Gulf of Bothnia, might be expected to see much cooler temperatures than Östersund, but sitting at a low elevation next to a large body of water means its weather conditions are actually very similar.

Northernmost Sweden is sub-arctic. The tip of the country lies within the Arctic Circle. Away from the moderating effects of the sea and subject to polar winds, the region experiences long, cold winters and short, cool summers. Snow can fall at any time of year and is heavy in the winter. Areas on the coast of the Gulf of Bothnia see much warmer temperatures and no snow in summer time. In the summer July is in perpetual daylight while in the winter December is in perpetual night. Luleå, in the east on the coast, sees average summer highs of 20°C and average winter lows of -13°C. Further northwest in Kiruna, where the famous ice hotel is, the highest average is 17°C and the lowest average low is a devastating -21°C. From March till November the average high temperature does not get above freezing throughout the area.

Sweden's weather, overcast and cool but warmer than other areas at the same latitude, for instance Alaska, can be attributed to its latitude, the Scandinavian Mountains, the surrounding waters and maritime and continental airstreams. Its northerly latitude ensures low temperatures and the extreme day lengths of winter and summer. Warm winds and sea currents keep the country, especially its coastal regions, warmer than might be expected. The mountains block humid air, keeping the region drier than otherwise expected.

If Sweden were not so interesting, visitors might be put off by the weather. But the Aurora Borealis and midnight sun keep people coming even in the darkest months. The ice hotel makes the most of Sweden's extreme northerly climate and skiers and snowboarders hurtle down the snow-capped mountains. The intricate fjords and lush green hills are stunning in the summer sun and the long daytimes make them enjoyable for longer.