Finland, in the far north of Europe and partially in the Arctic Circle, has borders with Sweden, Russia and Norway, and a coast on the Gulf of Finland.

Its extreme northerly position and proximity to the Arctic Sea and the Gulf of Finland dictate its cool climate.

The north of Finland receives a cool, humid, semi-continental climate, and the south receives a northern temperate climate.

Summers in Finland are relatively short and mild with two months of literally endless daylight. This gives rise to Finland's famous midnight sun.

Winters are long and bitterly cold seeing heavy snow and months of darkness often streaked with the majestic Northern Lights or Aurora Borealis.

No matter what time of year, the weather  in Finland is predictably unpredictable, seeing drastic changes in conditions within moments.

The north of Finland, Lapland Province, is partially inside the Arctic Circle and is usually about five degrees colder than the south.

Summer in Finland sees average high temperatures in the low 20s during the peak months of July and August, though occasionally tropical winds blow in hotter weather and temperatures can get into the 30s. Lapland usually sees temperatures around 20°C With the onset of climate change, Finland is seeing warmer summers every year. From the end of May to the beginning of August Finland experiences constant daylight, though it does get darker in the south during night hours. The light level at these times resembles twilight. In Lapland, the sun does not even dip below the horizon from May 17th till July 27th. In southern Lapland, the weather is typically sunny for around ten hours a day though sometimes it can be sunny for as long as nineteen hours. In the north, it is possible to experience twenty-four hours of blazing sunshine. Coastal regions are always the sunniest with the sea breeze holding the clouds inland until late afternoon. Early summer is dry but July and August see brief but violent thunderstorms.

In Lapland Autumn sets in at the end of August. The winds pick up, the first frosts arrive and the landscape flushes into brilliant golds and reds. In the south, the temperature remains pleasant till mid-September after which it repeats the pattern seen in Lapland. In Lapland in September, and in the rest of Finland in October, snow begins to fall. There are usually a number of snowfalls that do not settle before snow cover becomes permanent. By the beginning of October, temperatures have dropped to around 10°C in southern Finland and 5°C in Lapland. This drops to 5°C in southern Finland and 0°C in Lapland by the end of the month. November sees winter storms which often start as blizzards in the north which turns to rain as the storms move further south. Day and night patterns start normalising after July and by September in Helsinki sunrise occurs around 6.15 am and sunset falls around 8.30 pm. Autumn is the windiest time of year and the period sees four days with storm-force winds on average.

Winter descends on Finland in quite a hurry. Temperatures plummet; even in Helsinki, the average high temperature drops below freezing from December to March, with an average low of -10°C in January and February. Rovaniemi, in southern Lapland, regularly sees average temperatures around -20°C. By November north and east Finland are already covered in permanent snow. Central Lapland sees permanent snow cover from mid-October. In southern Finland, the permanent snow does not set in till Christmastime. Coastal regions and the south-western archipelago have milder temperatures and snow only stays from January to March. Snow cover is at its deepest in March. Snow in southern regions gets between ten and thirty centimetres while Lapland sees depths between sixty and one-hundred centimetres. On mild days rain can fall causing dangerous, icy driving conditions. Daylight hours steadily decrease lasting for only six hours in the south in the dead of winter. In Lapland, the sun stays below the horizon and night lasts for all of December until mid-January. Wintertime is the most likely period in which to spot the Northern Lights. In Lapland, they appear around two-hundred times a year on clear nights. They are visible far south and appear over Helsinki as many as twenty times a year in areas of low light pollution. 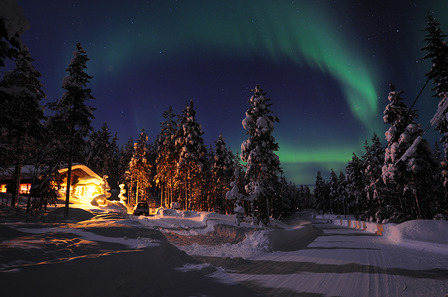 The Northern Lights making an appearance in Lapland at the wintertime.

The short springtime begins in March and sees clear sunny days with light winds. The fine weather can sometimes be interrupted by sudden cold spells bringing snow and sleet as late as May. Rainfall is minimal throughout the spring months. As the sun returns and climbs higher above the horizon, the days begin to heat up; but night times often remain very cold. In Lapland temperatures still, drop down to -30°C in March and -20°C in April. In southern Finland average highs rise rapidly from 0°C in March to 7°C in April and 15°C in May. Snow melts very quickly from March, though hindered by the cold nights which often freeze the meltwater. All snow has melted in coastal regions by April, central and southern Finland are snow-free sometime between April and May; Lapland and forested regions remain under their cold covers as late as the end of May.

Climate change is having a marked effect on Finland. Winters are shortening and getting milder; summers are getting hotter. In 2006 British holiday-makers intent on a white Christmas were confronted with slush in Rovaniemi, Lapland's capital, instead of the crisp white snow typical of past winters. 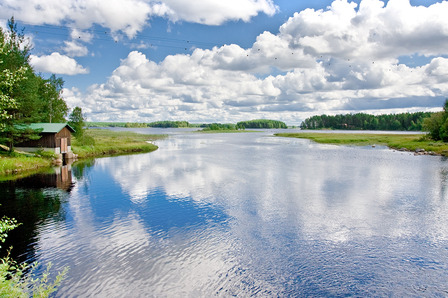 Lapland, Finland in the spring.