Japan spans a great distance from north to south so while the entire nation receives a temperate climate with all for seasons, the far south is sub-tropical while the far north is cool continental. Adding to the large regional climate variations are the mountains, which cover most of the country, the huge Asian continent to the west and the Pacific Ocean to the east. Despite being an island nation, surrounded by water, Japan sees huge differences in temperature from summer to winter, which is more characteristic of a continental climate. Japan is affected by many typhoons and rainfall is high throughout the country. Most of Japan receives a pronounced rainy period in June and July.

Japan is made up of volcanic islands and is part of the Pacific Ring of Fire; Japan is home to ten per cent of the world's active volcanoes. The country is highly fertile and mountainous, receiving many earthquakes which sometimes lead to tsunamis. As a result of the steep terrain urban areas have grown up around the flatter coastal areas with dense forest covering the majority of Japan; Japan's cities are the most densely populated in the world. Japan's large islands, from north to south, are Hokkaido, Honshu, Shikoku and Kyushu, to the south of which lie the much smaller Ryukyu Islands.

The northernmost island of Japan receives a cool continental climate with warm rather than hot summer and cold winters. It is the island nearest to Russia which gives a good idea of its seasonal weather as the island is greatly affected by weather systems coming over from the continent. Precipitation is generally moderate all year, though in winter this translates to high snowfall. There is a great deal of regional variation; areas closer to the sea receive milder temperatures, with warmer winters and cooler summers than inland locations, while as elevation increases in the mountains temperatures become colder throughout the year. Sapporo, on Hokkaido's west coast, is hottest in August with an average high of 26°C and an average low of 19°C, when it is also at its wettest. It is coldest in January with an average high of -1°C and an average low of -9°C. Further north and inland the gourmet town Asahikawa is at a slightly higher elevation and so receives similar summer temperatures, but its winters are much colder with an average high of -5 and an average low of -14°C in January. It snows almost every day in winter all over the island and skiers flock to Hokkaido's mountains, six of which are active volcanoes.

The Hot Springs resort town of Jozankei in the northern island of Hokkaido, Japan.

Honshu is the largest of Japan's islands and as such its climate is very similar to that of Hokkaido in the north, while its southerly regions are subtropical. The Japanese Alps, including Mount Fuji, see much cooler conditions and create large regional differences in climate from northeast to southwest. Northeast regions tend to receive a more even distribution of rain throughout the year, coming gradually to two peaks: one in late summer and one in mid-winter. Along with this coast, rainfall increases towards the southwest. Northeast regions also tend to have colder, snowier winters. Southwest regions receive a pronounced wet season from June till September; high levels of rainfall ease off in the dry season and actually reach quite low levels in winter months. Southwest winters are clearer with less snow. Temperatures increase across all seasons from north to south and hotter regions receive heavy thunderstorms in the summer months.

This is Japan's smallest major island. It is as mountainous as the other islands but is the only one without an active volcano. The mountains run from east to west, splitting the island into a small, northern region facing the Inland Sea where most of the population is located, and a considerably larger southern region facing the Pacific, which is very mountainous. The island's mountains block wind from the Pacific and so the south side is highly precipitous while the northern region is quite dry. The climate is temperate; due to its small size, the moderating effects of the sea are more pronounced. Summers are warm to hot and winters are mild, rarely seeing snow at sea level. The high mountains are much cooler.

Kyushu, the southernmost of Japan's major islands, receives a sub-tropical climate with long, hot summers and mild winters. The wet season falls in the summer months with rainfall very gradually increasing as the season approaches and very gradually decreasing after its peak. It is driest in December, wettest in June and sees huge amounts of rain between April and September. Rainfall increases from north to south. Nagasaki, in the north, sees summers similar to those in Tokyo, with an average high of 31°C in August. Winters are much milder here; January sees an average high of 9°C, an average low of 3°C and it rarely gets down to freezing, though frosts aren't uncommon. The sea around Kyushu is generally warm enough for swimming year round if you're prepared to be a little brave in the winter months. 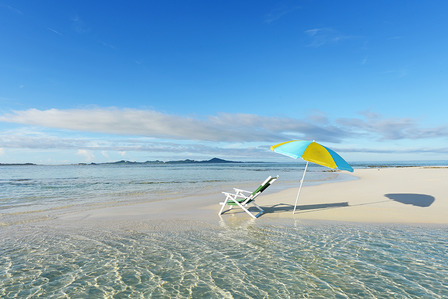 These islands, south of Kyushu's southern tip, stretch all the way down to the equator and as such you will find sub-tropical climates in the northern islands and true tropical climates in the southern islands. Naha, a town on one of the central islands, receives a similar rainfall pattern to Japan's major islands. Its temperature is much warmer in the winter, around 19°C, temperatures above 20°C last for the rest of the year, getting above 30°C from July till September. As per usual, mountainous regions are much cooler.