The latest and today's weather in Bridgetown , Barbados updated regularly

Bridgetown, Barbados, the capital and largest city on this sun-soaked holiday island destination in the Caribbean has tropical weather all year long. For the most part, Barbados' climate is sunny and reasonable with warm days, cool winds and comfortable evenings. It rains quite a lot in the summer and autumn season, which, together, make up the wet season. This decent amount of precipitation is invigorating and definitely required on those hot summer days. A downpour, however, is normally followed by sunny skies and within a few minutes everything will be dry again.

Although the hurricane season in the Caribbean is between June and November, hurricanes usually miss Barbados. Instead, Bridgetown will experience tropical cyclones and spectacular rain storms, but the rain quickly drains off into underground lakes or into the sea.

Barbados has two distinct seasons, a dry season and a wet season with temperatures between 30°C in the day and mid-20°s at nightemperatures that essentially constant throughout the whole year. All year round glorious weather, day and night, with hardly any variation in temperature is what Bridgetown, Barbados can offer on a holiday.

Barbados is one of a string of volcanic islands called the Lesser Antilles. These curl up from the northern coast of Venezuela toward the start of the Greater Antilles, another series of (bigger) islands that is made up of Puerto Rico; the island of Hispaniola, which comprises the countries of the Dominican Republic and Haiti; Jamaica; and Cuba. The Lesser Antilles, Barbados' neighbours so to speak, include other small holiday paradises, such as Martinique, Saint Lucia, and the U.S Virgin Islands.

Bridgetown sits on the west coast of Barbados, on the leeward side of the island, facing the Caribbean Sea. The Lesser Antilles sit in the Caribbean Sea with the Atlantic Ocean to their east. This puts them in the Gulf Stream but also the Atlantic hurricane belt. Sitting on the west coast means that Bridgetown is protected from the northeast trade winds coming in from the Atlantic, and as such enjoys warmer temperatures, less wind and rain and calmer seas than locations on the north and east coasts. As a result of the west-side benefits, the west coast of Barbados is home to many luxury five-star beach resorts, which has earned it the nickname of the "Platinum Coast." The city benefits from a hybrid of laid-back island life and modern city-living. The beautiful Caribbean Sea is warm regardless of what time of the year you visit, so if water sports or swimming is your thing, you're sure to find something to tickle your fancy therell year long.

The dry season in Barbados runs from December through May. Although you may experience some rainfall this time of year, the showers are very brief and quickly depart to leave clear skies again. Total precipitation levels aren't higher than 97mm per month (December), while the driest month of them all doesn't get more than 33mm of rainfall in total (March). The months with the lowest humidityhe driestre February, March and April. They have between 7 and 9 days with rainfall per month. December and January have more days with some rainfall4 and 13 respectively.

It's those months with the least rainfall that also have the most sunshine. March is the sunniest month of the year, with 10 glorious sunshine hours per day on average. All the other month in the dry season have 9 hours of sunshine daily. Sunshine doesn't vary all that much, though, and as you will see below, even the wet season has plenty of sunshine.

The most popular months of the year are January and February. This is when the tourists flood in, the beaches get crowded and visitors enjoy a winter sunshine break. This is the absolute tourist high season. December also gets its fair share of holiday-makers, people who want to enjoy a sun-soaked Christmas and/or New Year's. Just after the New Year celebrations, the crowds tend to thin out for a week or so.

The average temperature for the dry season hovers around 26°C. In the afternoons, the mercury reaches an average high of 28°C; at night, it drops to an average low of 23°C. Because of these warm to hot temperatures it would probably be a good idea to make sure that your accommodation has air-conditioning. The sea temperature is delightfully high all year roundn the dry season it averages 27°C. 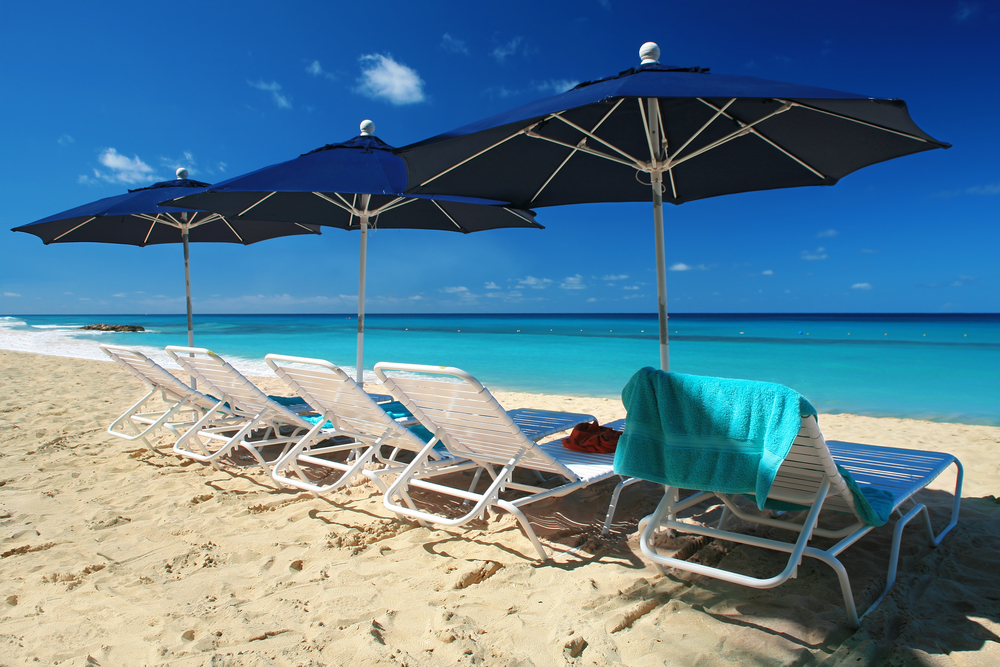 Empty sunbeds on beach in Barbados

The wet season in Barbados runs from June through November. Because this season coincides with hurricanes, it is less popular with tourists.

October and November are the months with the heaviest storms and with rainfall on 15 to 16 days. November receives the most rainfall of any month06mm. October is the second wettest month, receiving 178mm. June is the "driest" month in the wet seasont gets 112mm. All the other months lie somewhere in between. The thunderstorms and rain showers are generally short with occasional flash flooding. Sometimes, they are even refreshing and provide some brief relief from the heat.

Between 8 and 9 hours of sunshine are to be expected on each day in the wet season. October and November, the two wettest months, both have 8 hours of sunshine per day on average, which makes it the two least sunny months of the season (and of the year).

A slightly higher average temperature of 27°C comes with increased levels of humidity. The afternoons are hot and humid, with average high temperatures of 29°C. Even the nights are very warm this time of year, averaging between 24°C and 25°C. August and September are the months with the highest chance of a hurricane passing through. That being said; the risk of being affected by a hurricane is relatively low. Hotel staff and locals are very well-informed and generally know how to keep you safe in the event of one of these violent storms.

June and July are generally the best months of the wet season with plenty of sunshine and good deals available, which make avoiding the peak months attractive. The sea temperature is incredibly high in the wet season, averaging between 28°C and 29°C.

Planning a holiday in Bridgetown? Make sure to check out our detailed and up-to-date weather forecast. If you would like to know how the averages are calculated, take a look here.