The Bahamas sit to the southeast of Florida, the north of Cuba and the north-west of the Lesser Antilles. The archipelago is known for the brilliant white beaches of its two thousand cays and seven-hundred islands. This collection of mini-paradises basks in a tropical maritime climate, seeing a warm, dry winter season from November till April, and a hot, wet summer from May till October. The northern and western islands tend to be cooler than the southern islands. The gulf stream and the north-easterly trade winds, which can be thanked for the islands' consistently warm weather, are also to blame for their susceptibility to hurricanes, which frequently terrorise the islands. The hurricane season lasts from June till November.

The winter season between November and April is considered the best time to visit the Bahamas due to its guaranteed sunshine, mild temperatures and low rainfall. Rain can never be ruled out at any time of year, but levels are dramatically reduced in the dry season. The peak of the season, seeing the highest influx of beach-hungry, sun-starved tourists, falls between December and April. The very beginning and very end of the season benefit from higher temperatures. November and April see idyllic day time averages around 24°C and as little rainfall as the rest of the dry months, though the evenings can be quite cool. From December to March the daytime average can be expected to be around 21°C, and so at times, it can often be much cooler, especially in the evenings. It often gets up to around 23°C during these months, but only in the afternoons, while till midday, and once it starts to cool down again, the temperature usually lingers around a mild 15°C, which is not exactly sizzling.

The summer season is predictably unpredictable with high levels of rainfall and a high risk of hurricane activity. Between May and October temperatures steadily rise, reaching their peak in July and August with an average temperature around 28°C. Temperatures can get into the 30s and with increased humidity, it can all get a little too sticky for some visitors. Rainfall increases seeing two definite peaks in June and October. This rain is not to be laughed at. It is no mere spittle but an opening of the heavens with fantastic lightning displays, earth-shaking thunder and rain so thick it can feel like a wall of water. Good luck with your umbrellas and plastic macs. Even more serious are the hurricanes. In the Gulf stream, with their east side to the Atlantic, the Bahamas are right in the path of these devastatingly destructive tropical cyclones. Most hotels are solid enough to withstand these storms but still receive superficial damage. Of course, it is not all bleak in the Bahamian summertime. Many are happy to compromise with a few days of rain in May and July for temperatures in the mid to high 20s. Rain is often short-lived, and the hurricane season, starting in June, does not reach its peak until October.

There are, of course, slight regional variations. While the Bahamas are typically quite flat, the westerly sides face large land masses such as Florida, Cuba and beyond that Mexico. Also to the west is the Gulf of Mexico. To the east is the  North Atlantic Ocean. The northern islands see more marked differences between seasons and higher rainfall. Eastern islands are more susceptible to cool winds coming off the Atlantic.

A long stretch of Paradise Island, located in Nassau, Bahamas.

Grand Bahama, in the north of the Bahamas, sees higher rainfall and cooler winter temperatures. Much of the island is marshland and beaches are often quite swampy, due to the fact that the island began its life as a series of cays, and is still generally very low-lying. However, the island is as famous as the rest for its pristine, south-facing beaches. This is the only island to record snowfall, and rather tenuously at that; it apparently fell, mixed in with rain, in 1977... New Providence, on which is situated the capital Nassau, receives a very similar climate to Grand Bahama.

Andros, the largest of all the islands by quite a margin, cools off more in the evenings due to its larger land mass. It is also susceptible to fog. South Andros is much drier than north Andros. 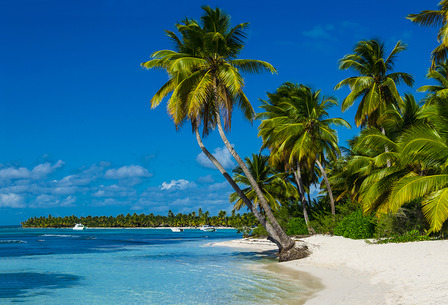 Island's of the Bahamas.

Abaco, to the east of Grand Bahama, also receives similar weather, though its easterly position means it has greater exposure to the north-easterly trade winds. While this tempers the extremes of temperature, it also means it is at greater risk of hurricanes.

The Bimini Islands, to the southwest of Abaco and Grand Bahama, is sheltered from the northeast winds by more easterly islands and often reaches higher summer temperatures. However, it is susceptible to cold fronts coming in from Florida in the winter and the weather can be quite unpredictable during this season. 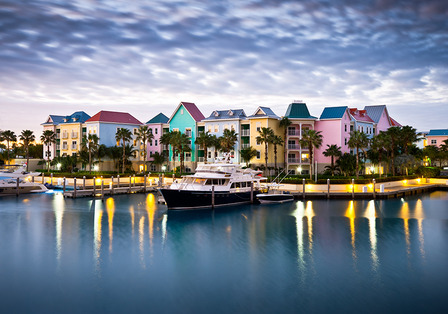 Eleuthera and Cat Island receive the brunt of the north-easterly winds, keeping temperatures mild in the summer. However, Cat Island is not in the path of cold winter weather coming in from the USA, while Eleuthera is.

The southern islands are generally warmer and drier with the expected variations from east to west regarding north-easterly trade winds and cold fronts coming down from Florida in the winter. San Salvador is slightly windier than the other islands, being exposed to weather from all fronts. Inagua is the driest island with some regions describable as arid.

The Bahamas are renowned for their crystal waters and white beaches. But the islands are more than pretty; they are an ecological haven, much of which is protected. With cays, corals, mangrove swamps, rainforest and dunes, the Bahamas is a haven for exotic plants and wildlife. As such, it also presents a magnificent setting for any holiday with scintillating views and fascinating, diverse habitats waiting to be explored. 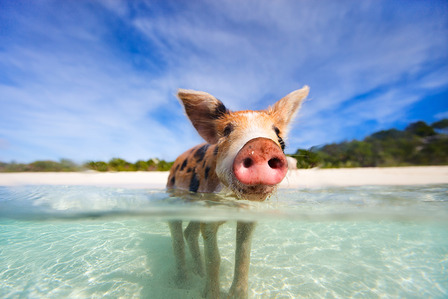 The famous swimming pig's in the Bahamas.