The latest and today's weather in Perth , Australia updated regularly

Perth enjoys the title of Australia's sunniest state capital and is rightly famed for its enviable weather. In summer it is almost always sunny and hot, while winter is a bit wetter and mild. Perth's annual average sunshine is a healthy 8 hours of sunshine a day. You need to be very aware of the strong sun on Perth especially in summer. Try to avoid being in the sun in the middle of the day and when you are in the sun make sure it is not for long. Also be sure to protect yourself with sun cream and a hat and t-shirt. The annual average rainfall is about 850mm, and some rain falls on about 110 days a year on average. Rainfall is normally heavy and brief, although cyclone systems that occur north of Perth can bring several contiguous days of wet stormy weather. Humidity is low, ranging from about 40% in winter to about 60% in summer.

Summer runs from December to February because Perth is in the southern hemisphere. During this time temperatures are very hot and rainfall is rare. This is classic Aussie beach weather. Summer days see average highs of 32°C and lows of 17°C. Temperatures can however get much higher often soaring into the 40s for a few days each summer. Last year saw 9 days recording a temperature over 40°C, which was far higher than the average of 3 days. The highest temperature ever recorded was a sweltering 46°C. At the other end of the scale, it is unusual to see summer temperatures drop below the mid-teens. There is relief, however, on the hottest summer days from the famous 'Fremantle Doctor': the strong wind that blows in off the ocean. This wind is said to be the most consistent in the world, blowing daily between noon and 3pm. It's a southwest wind that is caused by the temperature difference between the sea and the land and can penetrate as far as 100km inland. The Fremantle Doctor is famous to cricket lovers as it often plays an important role in matches at the Waca. It can be a hindrance to bowl into, but those who get it right can utilise the breeze to help swing the ball. The wind is also a welcome arrival for the fielders! Rainfall is only about 10mm a month in summer, which is very low. Water supply is a concern all summer. Sunshine levels peak in December and January at 11 hours per day. 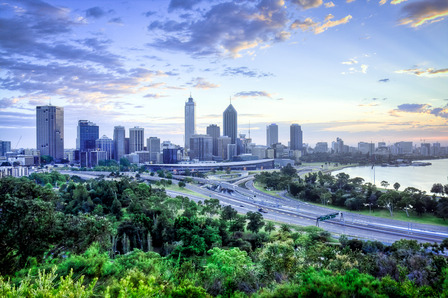 Winter in Perth is mild and wet. Temperatures vary between 8°C and 18°C in winter months. It only occasionally gets below 2°C or 3°C at night. The records show a minimum of -0.7 recorded in 2006. An average year will see about 25 chilly nights those where temperature falls below 5°C. You never get snow but winter is when most of the rain falls. June, July and August account for over half of the yearly rainfall. June and July are the wettest, both seeing about 160mm of rain on average. August sees a little less rain, but still over 100mm. The sea remains warm, not falling below 19°C. Sunshine levels hit their bottom in June and July at 5 hours per day which is still pretty sunny.

Spring and autumn are both very pleasant times in Perth with comfortable temperatures and low rainfall. Daily highs can reach into the low to mid 20s and it never gets cold. Rain is low especially in autumn. The start of spring (September) can see a little rain but it drops away sharply as the dry, hot summer approaches.