Tunisia is the smallest of Africa's countries and sits right in the middle of North Africa's Mediterranean coast. Due to its great geographical diversity, Tunisia's regions vary vastly in terms of climate, though the whole country is known for hot weather. The south of the country is mostly desert and its climate is accordingly arid with dramatic changes in temperature from day to night. Coastal regions are more temperate, enjoying a Mediterranean climate of long, hot and dry summers and mild, rainy winters.

The north and east sides of Tunisia meet the Mediterranean Sea. The coast is considered the most desirable part of Tunisia to live in or visit due to its relatively temperate climate. While the height of the summer sees average temperatures up in the 30s, coastal Tunisia receives refreshing breezes from the sea and usually cools off in the evenings. The summer on Tunisia's coast is at little risk of rain and is bathed in sunshine for over twelve hours a day. The Cap Bon peninsula is well known for its mild climate and is a favourite destination; while still getting the characteristic minimal rainfall and long hours of sunshine, the hottest of the African heat is staved off by the surrounding waters. Winter in these regions can get very cool, sometimes dipping below zero at night time. The Mediterranean regions receive wet weather in winter months from October till January, though rainfall is usually restricted to a few days with heavy showers rather than regular light showers. February till March also sees some rain but the summer months from May till August are almost completely dry. 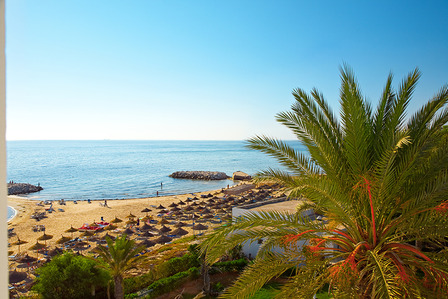 Tunisia, early morning on the beach.

As might be expected, the further south you travel the hotter and drier it gets. In Tunis, Tunisia's capital city on the north coast, summer days see average highs of 33°C and average lows of 21°C. To the south on the northeast coast, Monastir sees the same highs but its nights stay slightly hotter at an average low of 23°C. In the 'wet' months between October and April, Tunis can expect 10-20mm more rain per month than Monastir.

Africa's Atlas Mountains stretch across Tunisia from north to east creating a feature called the Dorsal. Most of the north of Tunisia is hilly, and with the protection of the Dorsal from the Saharan heat, and the wetter climate encouraged by the Mediterranean Sea, this is the most fertile area of Tunisia. It is quite heavily forested. Surprisingly, little of this land is farmed with agriculture mainly sticking to the coastal areas. There are few mountains higher than a thousand metres, with Jebel Ech Chambi home to Tunisia's highest point of 1544m, but in winter time snow can fall on the higher areas. It doesn't usually settle for long.

The central and western regions of Tunisia consist of mountain and plateau. The flat plains are hot and dry and become increasingly so approaching the Sahara. Nighttimes cool off considerably. Strong winds buffet the region throughout the year. Marking the border between plateau and desert is a string of salt lakes stretching from east to west, from the Mediterranean at the Gulf of Gabes into Algeria. During the summer, these lakes are often completely dry, leaving only a crust of salt that from afar could be mistaken for water. In the past surrounding springs once kept these lakes full, but the water was long ago diverted for irrigation. In the winter rainfall can fill these lakes with a few feet of water. The largest of these salt lakes, or 'chotts', is Chott el-Jerid in the west.

Tozeur, just northwest of Chott el-Jerid, is an oasis city. Its southerly location close to the Sahara means it experiences hot and arid weather conditions. In the summer the average high temperature sits at a scorching 39°C, plummeting at night to a still hot average low of 25°C. This huge drop in temperatures at night is typical of desert climates where insolation, the opposite of insulation, occurs due to low humidity and a lack of vegetation. In winter Tozeur sees average highs of 17°C and lows of 7°C. Rainfall is minimal: September, the wettest month sees an average of 13mm of rain. The best time to visit this area is in spring and autumn, from February to April and in October and November, when the worst of the heat can be avoided without the blisteringly cold nights.

The south of Tunisia is mostly semi-arid, rocky desert; forty per cent of the country is actually part of the Sahara. The Sahara is known to have one of the most unforgiving climates in the world. It is home to searing 50°C heat and frosty subzero lows, a ferocious northeast wind whipping up sand storms, and an annual average of 10-20mm of rainfall. It is exceedingly dry all year round with a slight increase in chance of rain falling, but only in short bursts, between December and March. With the land baked dry all year round, any rain that does fall causes flash flooding or sinks instantly through the sand. Sandy to the west and rocky to the east, the desert hordes heat in the day and gives it all up in the night.  There is almost no vegetation in this area.

The Sahara is where the Sirocco wind originates, blowing hot, dry weather and sometimes carrying sand into the surrounding areas across northern Africa and southern Europe. Locally, it is known as 'chili'. It is most common in the spring. While it is known to bring heat and aridity, once it reaches southern Europe or islands off the coast of Africa, it is actually much cooler and moister than it is at its origin, as while travelling over the Mediterranean it loses heat and picks up moisture.