December is mid-winter in Skanes. Temperatures drop significantly over the next few months; it's cold and it's wet. However, this is still North Africa, so cold is a relative term. On the East coast of Tunisia, Skanes benefits from the best of the mild, balmy Mediterranean climate of the mountainous North of the country, and the hot, dry heat of the Saharan South, on either side of it. So the weather in December is still likely to be quite temperate, though not all that hot. The winter is the perfect time for sightseeing and other activities, prohibited by the high temperatures during the summer months.

Temperatures are almost at their lowest in December. The average temperature is 13C, with highs of 17C; the highest temperature ever recorded in the area at this time is 26C, but it's unlikely to be hotter than 20C or 21C at this time. Correspondingly, there are just two sunshine hours per day, on average, and sea temperatures fall below 18C. It definitely isn't beach weather. Overnight, temperatures are likely to be around 9C and have been known to fall below 0C. Wind speeds pick up a little in the winter months (the average daily wind speed in December is around 15 km/h), which will also make the evenings feel very much cooler.

It's a similar story across Tunisia. Inland, in the more Mediterranean and mountainous north of the country, Tunis sees slightly similar average temperatures of 13C and highs of 17C. Overnight it will be even colder inland, with lows of below 8C. The south, closer to the Sahara, is unsurprisingly generally hotter. However, even in the arid, desert-regions of southern Tunisia temperatures have dropped significantly. In Tataouine, it's actually likely to be colder than many places in the north and on the east coast. The average temperature in December is just 12C, with highs of 16C and very cold overnight lows of 7C; it regularly drops to below zero overnight in many parts of the desert. El Borma does still see highs of 18C, but again, overnight temperatures drop significantly and regularly fall below 6C.

Winter is the rainy season in Skanes and the Sahel. Rainfall averages of around 50mm over seven days are expected, although any showers are likely to be quite light and usually only last a few hours. Correspondingly, humidity levels are at 75%. Although this is quite moderate, it's high for Skanes and will ensure the Sahel feels a little wetter and colder without the hot temperatures of the summer months.

It's likely to be even wetter in the north. Tunis receives on average around 70mm of rainfall over fifteen days in December. The south, closer to the desert, is much drier all year round. Tataouine only receives around 14mm of rainfall, over four days, and in the heart of the Sahara, El Borma on average receives only 4mm in less than two days.

The four star Golden Beach Hotel features a private beach, on site gym, pool, sauna and spa centre. At the luxury end of the scale, this hotel is the perfect place for a relaxing, pampered vacation at any time of the year. There are a variety of dining options, including the main restaurant, serving both international and Tunisian cuisine. The hotel offers an array of activities to help you make the most of your holiday. Of all the four star hotels you might choose, this is not perhaps the most luxurious; however, this is reflected in the prices.

If you don't mind staying a little further away, closer to Monastir, the Marina Cap Monastir comes very highly recommended. The hotel is located next to the marina (and the beach), a 10 minute walk from the centre of Monastir and a half hour from the centre of Skanes. The hotel is absolutely huge and has wonderful facilities, including seven restaurants, three fast food takeaways and seven cafés. There's bars, a pool, a private beach and gardens. Broken up into apartments, Marina Cap offers all the facilities you would expect from a hotel, with the option of a little more self-sufficiency.

Most of the restaurants in Skanes are confined to the hotels. If you'd like a little more variety, head into Monastir and try one of the local restaurants there.

Dar Chraka, on Place de l'independence, is a more traditional Tunisian restaurant. In a typical old-style house of Moorish design, the décor inside is a little odd but the atmosphere is quite lovely. Dar Chraka is very popular with both tourists and locals, so at peak times expect to have to wait for a table. The food makes the best of local ingredients and traditional cooking styles, and is very highly recommended.

The Picture of Eden Club in Skanes serves a variety of international cuisine and is very popular with tourists. Some days see a cut-price buffet, which is perfect for children and families just looking for a quick bite to eat.

Things to do in Skanes in December

The Ichkeul lake and wetland are a UNESCO World Heritage Site, and described as "a major stopover point for hundreds of thousands of migrating birds, such as ducks, geese, storks and pink flamingos, who come to feed and nest there. Ichkeul is the last remaining lake in a chain that once extended across North Africa". Visit between December and March to catch a glimpse of the birds who descend on the wetlands to overwinter.

The Roman ruins at Carthage, a UNESCO World Heritage Site, were founded in the 9th century B.C. on the Gulf of Tunis. In the course of the Punic wars, Carthage occupied then territories belonging to Rome, and after 146 B.C. a second Roman Carthage was established on the ruins of the first. It's a must-see on any visit to Tunisia. 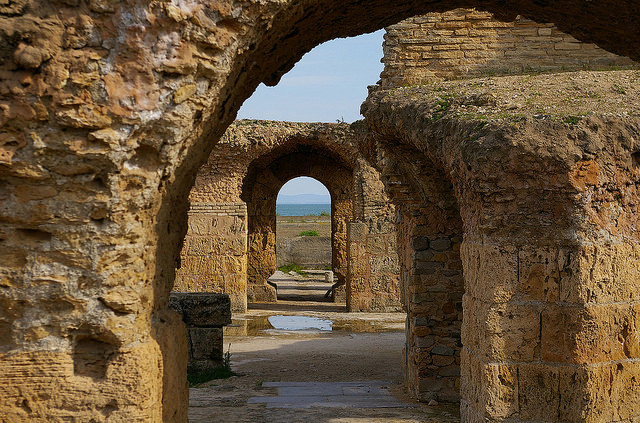 Moknine, not far from Monastir, is a tiny town noted for its finely worked ceramics and handcrafted jewellery. The folk museum is an excellent way to fill a few hours, or escape a rain shower, and the views over the surrounding hills are a wonderful photo opportunity.