Nearly the entire country of South Africa lies inside the temperate zone; with extremes of heat and cold being very rare. It's positioning next to a subtropical high-pressure belt of descending air constructs steady atmospheric environments over most of its surface area; releasing a generally dry climate.

Since the majority of the country lies at reasonably high elevation, which irritates the influence of latitude, even the tropical and near-tropical northern areas are much cooler. The high elevation and lack of the restrained power of the sea create large temperature variations in most inland regions.

The climate is very much influenced by the oceans that enclose the country to the east, south, and west. The moderate cyclones of the southern ocean implement considerable authority on weather patterns, in particular throughout winter months. The ensuing warmer and less-dense air rises more eagerly, helping the access of moisture-bearing clouds from the east.

South Africa and the surrounding ocean areas are influenced throughout the year by descending, opposing upper air masses that flow mainly eastward, generally causing fine weather and low annual precipitation. Throughout the winter months; June to August, cold polar air moves over the south-western, southern, and south-eastern coastal areas, sometimes reaching the southern centre of the country from the southwest. These polar masses come with cold fronts as well as rain and snow. In the summer months; December to February, the Atlantic high-pressure system clears up semi-permanently over the southern and western parts of the country. Local heating of the landmass from time to time causes low-pressure circumstances to develop.

South Africa is generally semiarid; its precipitation is extremely unpredictable, and farmers often face water shortages. More than one-fifth of the country is arid and receives less than 200 mm of precipitation annually, while almost half is semiarid and receives between 200 mm and 600 mm annually. Only about six per cent of the country averages more than 1000 mm per year. The quantity of precipitation steadily demurs from east to west. Whereas the KwaZulu-Natal coast obtains an added 1000 mm annually and Kimberley approximately 400 mm, Alexander Bay on the west coast receives less than 50 mm.

Summers are warm to hot, with daytime temperatures usually ranging from 21°C to 32°C. Higher elevations have lower temperatures, while the far northern and north-eastern regions and the western upland and river valleys in the central and southern states contain higher temperatures. At night temperatures fall considerably in the centre; in some places by as much as 17°C, while on the coast the daily range is much smaller. Winters are principally cool to cold, with many higher areas often having temperatures lower than the freezing point at night but readings of 10°C to 21°C in the daytime. However, winters are typically warm on the eastern and south-eastern coasts. Temperatures generally decrease from east to west: Durban has an annual average temperature of 21°C, while Port Nolloth; at comparable latitude but on the west coast, records average temperatures at 14°C.

The eastern highland areas; comprising Johannesburg features a dried out climate filled with days of unlimited sunshine. The region experiences high average daytime temperatures of approximately 20ºC and cooler night climates when the temperature drops to a chilly 5ºC. Between the months of October and April, the region consists of early evening showers regularly followed by thunderstorms, allowing the weather to never be too hot. 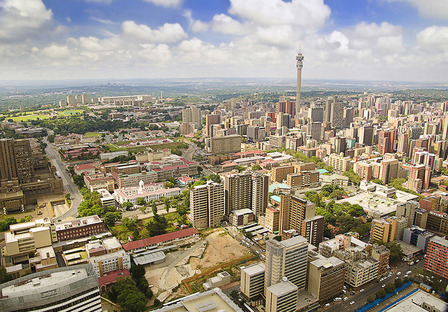 Positioned on the Cape Peninsula between the waters of both the Atlantic and the Indian Ocean, Cape Town experiences a distinctive Mediterranean climate. The Cape Town climate frequently boasts mild winters and pleasant summers, yet if you are bearing in mind a holiday in Cape Town, the highest temperatures occur in January and February when it can commonly reach 25°C throughout the day. As well as consistently hot temperatures you can expect up to eleven hours of sunshine during the day, as well as incredible water temperatures of 19°C.

Durban is blessed with tropical weather and a great deal of sunshine all year round. Situated on the eastern board of South Africa the flora is luxuriant and abundant. Temperatures can reach 32 °C in summer and between 16°C and 25°C from June to August. A light rain falls throughout the year even though summer is the wettest season. Water temperatures compare favourably with the Mediterranean in summer and in winter they rarely fall below 19 °C. Visitors and locals are known to have swimming in the oceans in the peak of winter.

Port Elizabeth boasts a magnificent moderate climate all year round and has been rated as having the fourth best weather in the world! Summers are dry and warm with moderately low humidity, while winters are remarkably mild, with year-round rainfall. Port Elizabeth receives around 453mm of rain per year while receiving the lowest rainfall at 27mm in January and the highest at 47mm in October. The monthly delivery of average daily maximum temperatures shows that the average midday temperatures for Port Elizabeth range from 19.5°C in July to 25°C in February. The region is the coldest during July when the temperatures drop to 8°C on average during the night.