Aruba is a small, tropical island that basks in glorious heat all year round. The perpetual summer is complemented by a short rainy season. The island is part of the Lesser Antilles, the smaller, south-western islands of the Antilles Islands of the Caribbean.

The Lesser Antilles are autonomous regions within the Kingdom of the Netherlands. They are part of a volcanic arc of islands and are considered geologically young due to their make-up of volcanic rock and coral. Aruba is one of the Leeward Antilles that lies in the southwest nearest the coast of South America. 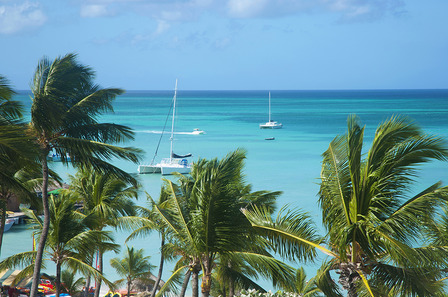 The day time temperature of Aruba and of the rest of the Lesser Antilles does not venture far from the average of 31°C. From May till October the day time average stays between 31.1°C and 31.7°C. Then in November, it plummets to, shock horror, 30.6°C, and dwindles in January and February to a mere 29.4°C. This wild meteorological mayhem has led herds of tourists to consider pulling their bikini straps back up, despite the risk of tan lines. Although Aruba is generally very humid all year, the heat does not usually become unbearable due to a reliable wind coming from the east. Night times remain hot and sticky around the mid-20s so outdoor revelry can continue round the clock; air-conditioned accommodation is preferable if you plan to sleep.

The sea is at its "coolest" from January to April, seeing an undeniably balmy average of 26°C. It heats up throughout the summer months and reaches its peak in October at 29°C.

The wind is at its strongest from January to March and provides water sport enthusiasts with perfect wind-surfing and sailing conditions. The wind is predictable because the almost uniformly flat terrain of Aruba allows the same wind to build up every day. This wind is able to whisk clouds efficiently over the island, not giving them the chance to develop into rain clouds. Because of this, the sea is usually placid, in the south, presenting a clear sea for scuba diving and snorkelling. Another effect is that Aruba, and the other Leeward Islands, receive almost half the rain of the Windward Islands. The island's average yearly rainfall is around fifty centimetres, most of which falls during the rainy season which lasts from October to December. Rain is usually short-lived and followed by brilliant sunshine; year-round Aruba rarely sees less than eight hours of sunshine and clear skies a day.

While rains can be heavy they rarely whip up into violent storms. The island is usually treated to about one thunderstorm per summer month. Aruba lies just out of the usual path of hurricanes but in 2007, residents were terrorised by hurricane Felix which passed just north of the island. Almost no damage was done but the island experienced winds beyond tropical storm force and it was considered a very close call. That's about the most excitement Aruba has ever seen in terms of weather. While there is regional variation, each region has quite predictable weather. The island's complete lack of adventurous climatic spirit is celebrated by locals has turned the island into a Mecca for tourists. As such, there is never a truly bad time to visit Aruba in terms of the weather, but there is also never a perfect time to visit in terms of crowds.

Aruba is classed as having a tropical maritime climate, which can be attributed to its position just a skip away from the equator, in the Caribbean Sea and its proximity to the surrounding, protective land. Aruba's light winds and lower levels of rain in comparison to the other Antilles islands are owed to its flat topography. There is some regional variation in climatic conditions from place to place on Aruba. The north has an unsettled sea as this is the windward side of the island. This is in great contrast to the southern and west coasts which offer those wanting to explore the reef clear visibility down to one-hundred feet. The interior of the island is quite arid with sand dunes and desert-like plains, as well as desert vegetation such as cacti, while the coastal regions are dotted with palms. This is atypical of tropical, volcanic islands, which are usually densely vegetated, and is mainly due to the constant wind and low rainfall. 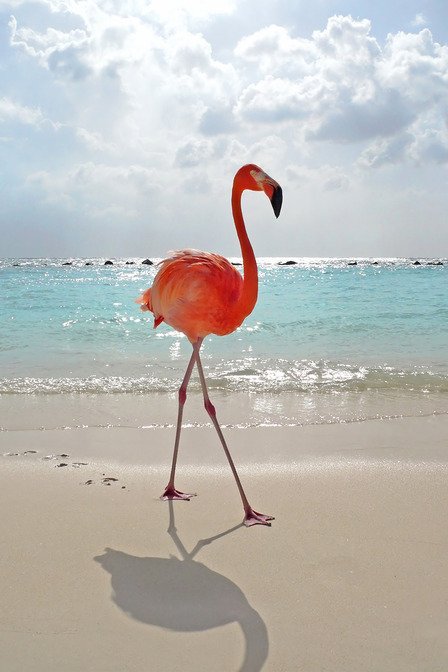 Flamingo on the beach in Aruba.