The latest and today's weather in Skanes , Tunisia updated regularly

Skanes has a dry Mediterranean climate with long, hot summers and mild winters. An extended summer makes Skanes, and other resorts in the surrounding region, perfect for a seaside getaway for much of the year. The township receives 3500 hours of sunshine per year; even in winter visitors can still come away with a tan. The sea is perfect for swimming and water sports for most of the summer but does cool in the winter. Rain is generally absent and drought conditions often prevail. 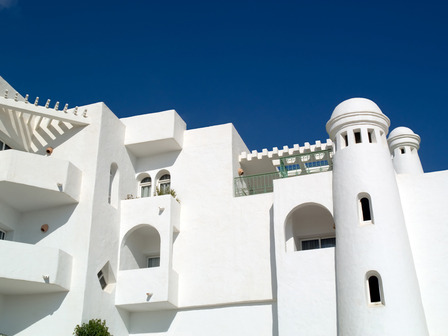 Skanes sits on the northeast coast of Tunisia in Northern Africa. It is a suburb of the more famous city of Monastir.

As you would expect from a North African climate, Skanes is never less than hot throughout the summer months. The average high temperature rises from the mid 20s in May and October to a peak of 33ºC in July and August. Low humidity makes this slightly more bearable than might be imagined, and also allows the temperature to drop around 10ºC at night to the low 20s. This is still hot and will take some getting used to. From July to September the heat will be too much for some; it can be sent spiking up high into the 30s, especially if the dry, dusty sirocco wind blows over from the Sahara. The peak months see about eleven or twelve hours of sunshine per day. The beginning of the season is sunnier than the end with about ten hours per day in May in comparison to seven hours per day in October, but the sea is much warmer at the end of the season. Arid conditions and the desert in south Tunisia can give rise to sandstorms which reduce visibility, inhibit any outdoor activity and leave everything coated in dust. Sandstorms are much more likely than rainstorms but if they do occur they usually do so in brief thunderstorms.

The mild winters of Skanes see plenty of sunshine and only marginally more rain than the summer. The resort is a mere four hour flight from the dismal shores of Blighty yet it is generally warm and bright. The fringe months still regularly see temperatures near 20ºC though the sea cools down rapidly from the beginning of the season. From mid December till mid February the temperature slightly too low for a true beach holiday, getting down to an average high of 16ºC in January, which is the coldest month. Throughout the season night time temperatures are very nippy, often falling below 10ºC. It rarely gets down to freezing so snow and frost are highly unlikely.

Sunshine levels drop to around six hours per day which is still very sunny, especially in comparison to London which gets down to a gloomy one hour per day in December. This is, after all, Africa, so most European cities can't really compare as winter sun destinations. However, the sea gets down to a brisk 15ºC for much of the season so swimming is unlikely to feature in any winter break. December to February is a great period to visit if you just can't handle the grey skies at home and want to do a bit of sight-seeing. November, late March and April are better than most British summers: reliably warm in the day, basking in sunshine and devoid of rain.