The latest and today's weather in Monastir , Tunisia updated regularly

Monastir enjoys a dry Mediterranean climate with hot summers, extremely mild winters, lots of sunshine and low rainfall year round. The city sits in the northeast of Tunisia on its central coast. It is much hotter than the Mediterranean resorts on the European coast, but much milder than inland areas of Tunisia, forty percent of which is part of the Sahara. Summer, from June till September, is absolutely sweltering. If you spend too long outside you'll find yourself melted to the spot or wilting in the shade. While humidity is low, the soaring heat can still be hard to handle. The average high temperature of 29°C in June skips past the 30°C mark in the middle of the month and climbs up to 33°C for July and August. Of course, an average temperature leaves scope for much higher and lower temperatures from day to day, and it can sometimes soar into the stifling 40s. In September the average high gets back down to 30°C. Night times see a dramatic drop in temperature to the low 20s which are still baking and can make for uncomfortable sleeping conditions. In July, the sun shines for an enviable twelve hours a day. Rainfall is unlikely but rarely there are thunderstorms. 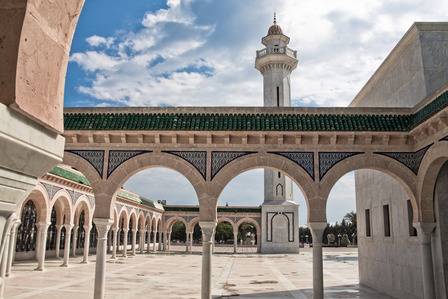 Autumn, in October and November, is wonderfully warm with refreshing nights and plenty of sunshine. The average high temperature becomes more reasonable, stepping down to 26°C in October then to 21°C in November. Night times see average lows of 17°C in October and 13°C in November. The sun does lessen but still dominates clear blue skies for a good seven hours each day. Thunderstorms are a little more frequent but not enough to worry about. This is probably the best season to visit Monastir, avoiding the excessive heat and crowds of the summer and having the edge on spring with its warm sea waters. However, from mid November it does get a bit too cool for a true beach holiday and night times require a thick jumper.

Winter, from December till February, is very mild. The average high temperature gets down to its lowest of 16°C in January, when the average low is 8°C. Night times can get very cold, sometimes dropping just below freezing, but this is rare. Rainfall stays low and the sun shines for around six hours a day.

Spring, from March till May, sees a return of the warmth and the sun. The average high temperature climbs 19°C in March, to 22°C in April and 25°C in May. This is a great time to holiday in Monastir though spring nights are very cool, 10°C in March, 12°C in April, 15°C in May, and the sea does not get above 17°C till the end of the season. However, it is slightly drier than autumn.

Monastir owes its warm, dry climate to the topography of Africa and its location on the Mediterranean coast. The Atlas Mountains, which stretch across the north-western corner of the continent, block northwest winds from the Atlantic Ocean, so creating the Sahara. Humid air is blows over Monastir and other coastal resorts, holding onto precipitation until they hit the mountains. Monastir's latitude assures warmth, but the Sahara is to blame for the sirocco winds that unpredictably blow in extreme heat and sand. The Mediterranean Sea tempers the heat of Monastir's summers and the cold of its winters.