The latest and today's weather in Agadir , Morocco updated regularly

Agadir is a coastal city located in Morocco within North Africa, popular with European holidaymakers who want a hot and sunny holiday destination a little bit more exotic than the Mediterranean. It's situated within the foothills of the Anti-Atlas Mountains, where most of the land is arid and barren. When cloud-carrying winds hit these mountains, they release small amounts of rain which fall into the foothills this is why the weather in Agadir is a lot more pleasant and enjoyable than the surrounding areas where the landscape is mainly dry and lunar. 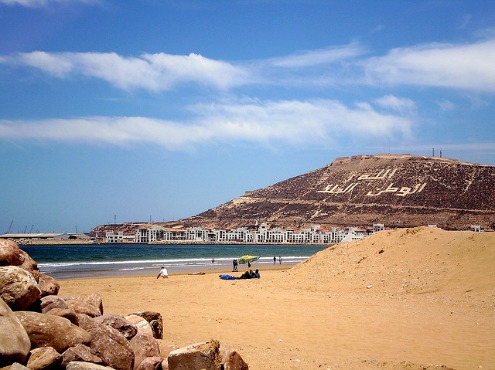 Relax on the golden beaches in Agadir, Morocco, image taken by Eric

Agadir is unlike other Moroccan cities, a result of the 1960 earthquake which effectively destroyed the entirety of the city. It was the most destructive and deadliest earthquake in the history of Morocco measuring 5.7 on the Richter scale, killing one third of the Agadir's population and leaving 35,000 people homeless. Two days after the earthquake, which occurred on the evening of February 29th, the whole city was evacuated to prevent the spread of disease. The city was then completely rebuilt 3km south of its original location with contemporary architecture and a straightforward street grid which is easily navigable.

Some of the world's most famous architects were involved in this rebuild and as a result, Agadir is now a modern city of luxury hotels, golf courses and promenades. If you are in search of an authentic Moroccan town, Agadir is certainly not the place to visit. Agadir is now a white city, home to beautiful gardens, sculptural buildings, an ultramodern airport and golden beaches.

Agadir has a semi-arid steppe climate, with just two seasons hot, dry summers and warm winters with just a small amount of rainfall. Over the course of the year, the temperature typically varies between 8°C and 31°C, rarely dropping below 4°C or rising above 37°C. These temperatures are much milder than that which you'll find in most of northern Africa. This is mainly due to its coastal location the cooling sea breeze help keep temperatures down and the further inland you go, the more extreme the climate becomes. 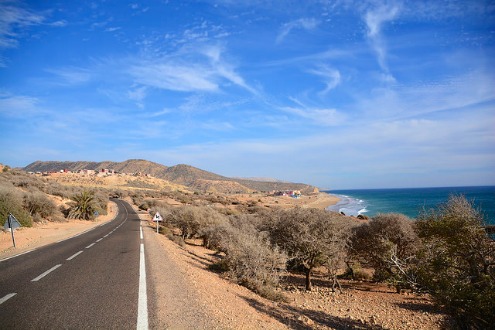 Enjoy a scenic drive on holiday in Agadir, Morocco, image taken by Antonio

Summer in Agadir falls between May and November, when the average temperature is 22.5°C. Average temperatures start off at a cool 20°C in May, peaking at 26°C in July and August the hottest months of the year. Temperatures then drop from then onward as summer transitions into winter. There is a huge difference between average highs during the daytime and average lows in the middle of the night, so if you find the heat of the daytime too much to bear, you always know that the evenings will bring some relief.

Average highs range between 25°C and 30°C, whilst average lows range between 14°C and 18°C. So although you'll be perfectly comfortable in beach clothes during the daytime, you might need a light jacket or jumper to make sure you stay warm on an evening.

Temperatures can sometimes peak into the mid-40s when strong winds blow over from the Sahara Desert. When these winds come, they bring with them temperatures about 10°C higher than normal, low visibility and a distinct dryness to the air. When they're at their most severe, these winds are also accompanied by intense sand storms which are usually relatively brief.

Even though the Atlantic Sea is a lot cooler than the Mediterranean, the sea around Agadir is still warm enough for swimming in for most of the year. Anything above 18°C is generally considered to be warm enough for swimming, so if you visit Agadir in May, you might find the sea a bit on the cool side. However, as the season develops, the average sea temperature continues to climb until it peaks at 21°C between July and October. 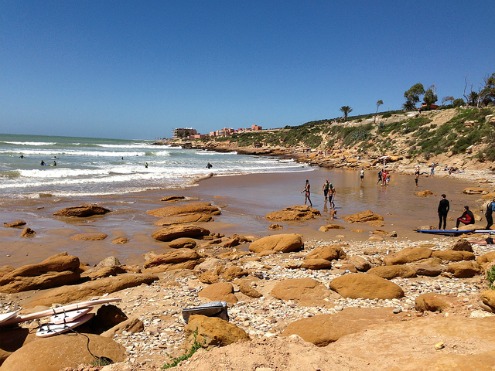 By comparison, winter is much cooler and damper than summer, which makes it the less popular time to visit. At this time of year, the average temperature is 17°C, with January being the coolest month of the season when the average temperature is just 15°C. During this season, the difference between the average highs during the daytime and the average lows during the night are even more pronounced. Average highs range between 22°C and 26°C, whilst average lows range between 8°C and 13°C. Due to the low humidity and desert location, these night time temperatures can often feel even cooler than they actually are, so make sure you take enough winter warmers to keep you comfortable on an evening.

As the temperatures drop, the amount of rainfall increases significantly. December is the wettest month, when 63mm falls over the course of five rainy days. After this spike in precipitation, the rainfall continues to subside down to 37mm in January, 29mm in February, 25mm in March and 13mm in April. Unlike winters in the UK where drizzle can go on for days, the rain in Agadir falls in short, heavy downfalls which rarely last more than a couple of hours. So even if you do get a bit of rainfall during your winter holiday in Agadir, the storm will be short and the sun will soon come out to brighten things up.

Even though it's winter, Agadir is still very sunny. Between December and February, the city boasts an average of nine hours of sunshine each day. This figure jumps up to 11 in April and 12 by May. Although the sun will be shining every day during your holiday in Agadir, you might find that it's only really warm enough to sunbathe in the middle of the day between 11am and 4pm. No matter the season, it's very easy to get sunburnt in Agadir it is in Africa, after all! So make sure you slap on the suntan lotion whenever you're out in the sun.

Unfortunately, if you feel the cold easily, you might find the sea a bit too cold for swimming in Agadir in winter. At 19°C, the average sea water temperature in December is probably warm enough for swimming, but by the time it drops down to 17°C in February and March, only the bravest will dare venture in for a dip.