The Cook Islands are an autonomous, legislative democratic state in free association with New Zealand that consists of fifteen small islands in the South Pacific Ocean. The total land area of the Cook Islands is only 240 square kilometres, however, the restricted economic zone, which includes the entire surrounding sea sums up to over 1.8 million square kilometres, leaving an empty ocean in between islands.

All fifteen islands were formed by volcanic motion and can be divided into two distinguishing zones, known as the Southern Cook Islands and the Northern Cook Islands that are commonly known for their coral reefs. With locality in the South Pacific Ocean, The Cook Islands are positioned in the middle of French Polynesia and Fiji and are to the north-east of New Zealand.

The main Cook Islands are in about the same proximity to the equator as Hawaii and typically experience tropical climates at all times of the year. There is however a general warmer and more humid time of the year; lasting from November until the near end of April. While the cooler and drier period lasts from May until October. Areas of the South Pacific such as the Solomon Islands, Samoa and Tuvalu that are situated in rather close proximity to the equator feature average temperatures a little higher to that in the Cook Islands.

The Islands array from the region's biggest and highest island; Rarotonga to the low lying islands of the south, and the coral reefs of the north. With Rarotonga being the country's busiest of the most dynamic island, the area of Aitutaki is a peaceful escape for visitors to enjoy the village life. All tourists are given compensation of natural beauty and colourful sights at every point and turn. Very few visitors will travel beyond the two major islands; consequently, a vacation to Atiu, Mauke or Mangaia with less crowded beaches will be a pleasurable experience.

The typical weather throughout the year can be rather variable from day to day and will alter from island to island. Although there is an everlasting coastal breeze throughout all fifteen islands, the climate will generally stay quite hot and humid. The temperature of the Cook Islands is equable and only has a slight difference in average temperature throughout seasons. The rainy season that occurs from November until March rarely affects the overall temperature of the climate during the day but can to some extent cool the temperature after nightfall. The average air temperature will linger around 28ºC during the hot period of the year, typically seeing highs just above 30ºC minimum temperatures no lower than 24ºC. The cooler and drier part of the year that runs from April until October, will typically see temperatures averaging anywhere between 20ºC to 26ºC.

Rarotonga tends to be the wettest region of the Cook Islands as many rain clouds hover over the centre of the area for much of the year. The coast, however, is typically filled with sunshine but rain does fall in brisk heavy downpours. All other islands throughout the country are commonly rather dry and will typically feature harsh water shortages.

The common trade winds that enter the Islands from the east and southeast of the South Pacific tend to be relatively humid for 80 per cent of the year. These winds will reach the Southern Cook Islands before the North and for the remainder of the year will come from the southwest and west. 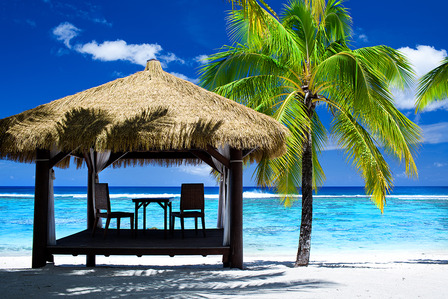 Tropical gazebo on the beach in the Cook Islands.

Even though the occurrence is rather unlikely, the months from November to April are the period of the official hurricane season. Global warming is also having an impact on making the whereabouts and occasions more and more erratic. Hurricane Keli, that affected the country in 1997 was the South Pacific's first hurricane to ever be sighted in the months of June, whereas in 2002; Hurricane Zoe was the most powerful hurricane to ever be recorded in the entire Pacific Ocean. The climate cycle of El Nino; where the movement of warm water moves east towards central and southern America has increased significantly over the last ten years. This will commonly bring torrential rains and flooding to the Cook Islands and French Polynesia areas and severe droughts to Melanesia.

Climate change has had a major impact of the South Pacific regions as current local weather forecasts are much less predictable than they were in previous years. Throughout the wet season that runs from November to April, it is now typically to experience days of long clear blue skies and sunny weather. Whereas the characteristic dry season can now guarantee continuous days of rain. These profound rains are commonly followed by hot clear sunny days and a vast amount of the remaining precipitation falls throughout the night. 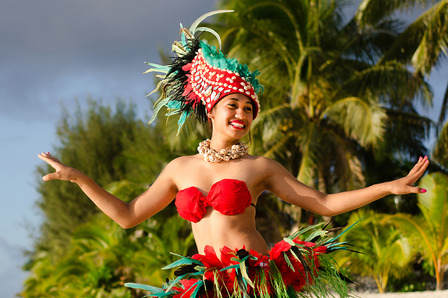