Brazil lies in the northern realms of South America. Taking up over 8,500,000 square kilometres, Brazil is the 5th largest country in the world by geographical area. With 7491 kilometres of coastline, the Atlantic Ocean to its east and crossed by the equator and the Tropic of Capricorn, Brazil is home to numerous climatic regions: equatorial, tropical, semi-arid, highland tropical, temperate and subtropical.

90% of the country lies within the tropics, meaning that much of Brazil is hot, humid and home to two seasons: wet and dry. Much of the country is covered by the enormous Amazon Rainforest which only increases the humid, tropical conditions that are experienced in most of northern Brazil.

In northern Brazil there isn't really a 'dry season' though certain times of the year to see more rainfall than others; you could divide the year into a 'wet season' and a 'wetter season'!

The average temperature across the country is about 25°C, and most of Brazil see quite significant diurnal temperature ranges - meaning there is quite a large difference between daytime and nighttime temperatures.

Central Brazil sees weather more indicative of a savanna climate, with rainfall that is more seasonal and seasons that are slightly more defined than in the north.

The South of the country has a temperate climate with daily average temperatures below 18 °C and much cooler winters. There are frosts in parts and occasional snowfall as you increase in altitude.

The Amazon forest occupies some 5.5 million square kilometres; 60% of this lies within Brazil. In the Amazon, Region conditions vary depending on varying altitude and proximity to the ocean. However, as a rule, it is hot and humidity is so high that it can often be extremely uncomfortable - so make sure you come prepared as otherwise, the conditions can be extremely oppressive. The rainforest is home to the most impressive amount of different species of flora and fauna and is one of the most interesting and diverse regions in the world.

The Amazon region is home to approximately 2.5 million species of insects, over 2000 different birds and mammals and tens of thousands of different plants. In fact, to this day there have been over 40,000 plant species, more than 3,000 fish, 1,200 birds, 420 mammals, and over 700 amphibians and reptiles.

The city of Belemsits at the mouth of the Amazon River and is the wettest place in all of Brazil. Most of the annual rainfall occurs in the wet season from January to May. You can expect rainfall at any time of year, falling in torrential downpours that are brief in the dry season but prolonged in the wet. 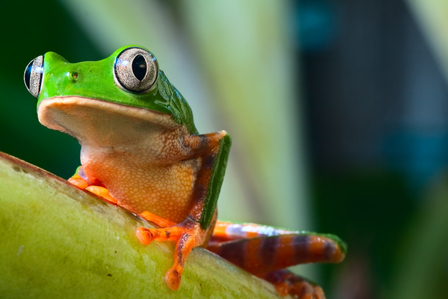 Home to over 700 Amphibians, The Amazon.

The climate here is equatorial - obviously due to the fact that the equator crosses the country, traversing the mouth of the Amazon. Along the equator, the average annual temperature is about 25°C, though it is much cooler here than when you head further south and move into the more temperate regions.

This region, which is home to the world's largest rainforest - the Amazon, is infamous for its notoriously high humidity and heavy rainfall. Annual precipitation has been known to reach 3000 mm across the year, with most years recording 2,000 mm on average- the western parts see much more rainfall across the year than the east. The high levels of precipitation are quite remarkable especially when you consider that the region actually sees a three to the five-month dry season.

The very northeast of Brazil witnesses a semi-arid climate- a stark contrast to the conditions experienced within the Amazon region. Rainfall in the northeast is scarce across the year and there are regular droughts where there is minimal to no rainfall for years on end, making this the driest part of the country by far. The area, only with being the driest, is also the hottest part of the country. From May to November - the dry season - temperatures in excess of 38°C are not uncommon. 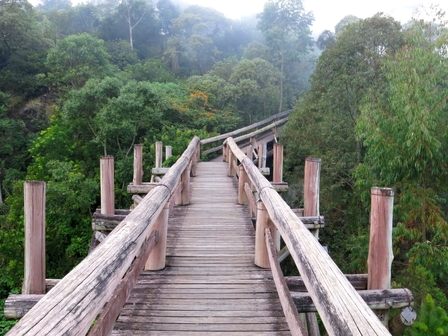 The Amazon in Northern Brazil, an eco-tourist footbridge.

In Central Brazil you will find the nation's capital, Brasília, which as far as they go is a fairly new city, only denoted as Brazil's capital in 1960.

Brasilia's weather is best described as tropical savanna. The year sees two seasons: one is dry and cold and the other is humid and warm. Across the year the average temperature is about 21°C, with July being the coolest month with an average maximum of 25°C and September is the warmest month- with an average daily temperature of 28°C.

See here for average conditions in Brasilia which are fairly typical of what weather is witnessed in central Brazil.

The conditions in Rio de Janeiro, which lies in the southeast upon the South Atlantic Ocean, are fairly typical of the southern coastal regions.

Conditions in Rio are tropical, though the city is moderated by the influences of the Atlantic Ocean which means cooler temperatures. As you head further inland and away from the water you will find the mercury will often rise to over 40°C in the peak of the summer months. Most months of the year will see a day or two where the temperature reaches above 30 °C. If you want to avoid the heat as much as possible, stick to the coastal regions and you will be cooled by the prevailing sea breezes.

The coldest temperature ever recorded in Rio was 4°C which occurred back in 1928 in the month of July, however, it is pretty rare for temperatures to fall below 10 °C for very long.

See here for average conditions in Rio de Janeiro, and here for an overview of South America as a whole. 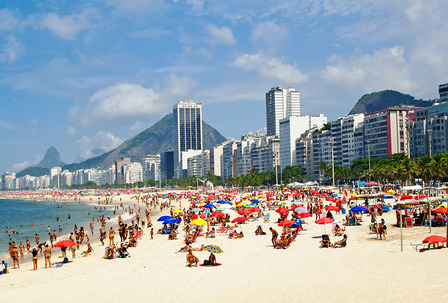