Ireland is famed for its luscious green terrain split up by rocky mountains and rolling hills. The saying goes in Ireland that you can tell the difference between summer and winter by measuring the temperature of the rain- so by this, you can gauge that rain is a dominant feature and there isn't a lot of temperature variation across the country.

The weather is mild but changeable and rain can be expected at any time of the year. Parts of the country are oceanic, and as you move further away from the coast the conditions become slightly more temperature- however, the prevailing factor across the whole country is that few temperature extremes are experienced.

Ireland is affected by the North Atlantic Drift, so this has a moderating effect on the climate and keeps winter in Ireland warmer than places of similar latitudes. Its northerly location, however, means that summers never get particularly hot either. The climate is generally fairly typical of an insular climate and is moderated by the moist winds that blow across the island, these winds prevail from the south-west, off the Atlantic, and can reach particular high speeds at times of the year.

The West Coast of the island is prone to the full force of storms which form over the Atlantic, and this is particularly common in late Autumn and early Winter. Occasionally these storms cause raging destructive winds which bring hail, heavy rainfall and the odd snowfall. The north and north-west of Ireland see much more snowfall that the south and south-west- in fact, some parts of southern Ireland haven't seen any snowfall since 1991. See here for average conditions in Cork on the south coast, or here for a general overview of Cork.

Inland Ireland gets warmer in the summer months than the coastal region, though on the flipside it also gets much colder in the winter. These temperature differences are not that great, with central Ireland only being a few degrees cooler than the coast. In the centre of the country across the year will record about 40 days below freezing, however on the coast the mercury will only fall below 0 degrees on average 10 days per year.

The country is made up of a ring of coastal mountains, with low lying central plains in the centre. Due to Ireland's mild climate and significant rainfall, this has lead to luscious green terrain and plentiful vegetation which makes for very scenic and pleasant landscapes, which has lead to the island being called the 'Emerald Isle.' Home to rolling hills, mountainous rocky areas and dramatic green vistas, Ireland is a picturesque place to visit any time of the year.

Dublin is the capital of Ireland and sits upon the east coast where it is sheltered from the heavy storms that the Atlantic coast is subject to. The climate in Dublin is a maritime, temperate climate that (like the rest of the country) lacks major temperature extremes and has cool summers and mild winters. Although popular belief leads many tourists to believe that Dublin is a very rainy city, it in fact sees fewer days of rain, on average, than London.

The average maximum temperature in January, the middle of winter, is about 8 degrees while July sees average maximums of about 20 degrees. From May to June will see Dublin basking in the most hours of uninterrupted sunlight as this is when the sky will be the clearest and before the more overcast weather sits in. Because of its northerly latitude, in the height of summer, the days will have about 19 hours of daylight before the sun sets. On the flipside the winters days are short and at the peak of winter, there are only 9 hours of daylight.

Occasionally Dublin is hit by strong winds that blow from the Atlantic, though the storms are much less severe here than they are in other parts of the country. If Dublin is to be hit by strong winds it is most likely to occur in the height of winter. In 1997 on December 24, a region just out of Dublin was hit by winds that gathered speeds of 151 km/h!

There are plenty of things to keep you busy if visiting Dublin and find your self in the midst of a rainy windy day, take in the city streets or take a visit to the original Guinness Brewery- don't worry it'll be here for a while as it as a 9,000 year lease on its property.

Dublin is affected by the urban heat phenomenon which means the inner city is a few degrees warmer than more regional areas. The heat is stored up in the city centre and will keep it warm throughout the days. 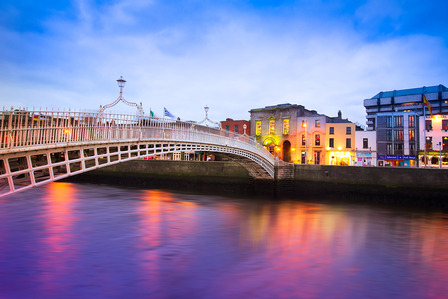 Dublin Ireland at dusk with waterfront and historic Ha'penny Bridge.

Though it has been stated that Ireland does lack temperature extremes, it is hit by the occasional heat wave. Historically the highest temperature ever recorded in Ireland was 33.3°C at Kilkenny Castle June 26 1887. During the 20th century, the record high is 32.5°C at Boora, Co. Offaly which was recorded on 29th June 1976.

Belfast is the capital of NORTHERN IRELAND, and is part of the United Kingdom, lies on the east coast flanked by hills on its north and north-west. Like Dublin it has a temperature climate, however, due to the location further north, it sees more daylight extremes than Dublin. In fact, during the winter solstice, the sun will not rise until just before 9 am and will set again by 4 pm. Conversely, at the summer solstice in June, the sun rises before 5 am and will not set again until after 10 pm!

While Belfast is certainly not a city that you will call 'hot' it does witness warmer remarkably warmer winter temperatures than what you would expect for its latitude. In fact, at places of the same latitude in Russia or Canada winter lows reach a blistering -45 degrees, while in Belfast winter highs have been known to reach 17 degrees! Winters can see its fair share of warm days, though on average the maximum reaches on 6 degrees. The average minimum is about 2 to 3 degrees during the winter months.

Due to its location in close proximity to the hilly ground, Belfast sees more rainfall than Dublin and on average records 845.8mm of rain per year on 213 days. Summers in Belfast can get quite warm, with temperatures often reaching into the high 20's. When you combine this heat with the rainfall, the humidity can prove to be somewhat uncomfortable so be sure to pack some light clothing.

Summers generally see highs of 18 degrees and average minimum temperatures of 9 degrees in June, and 11 degrees in July and August. July is also the wettest month, recording 94mm of precipitation on average for the month, while April is the driest- recording 48mm precipitation. 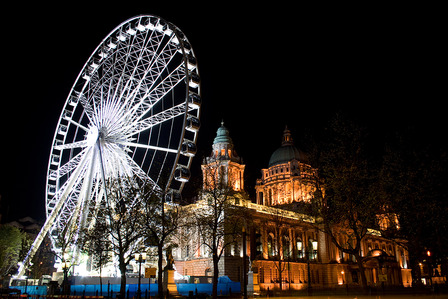