Shark's Bay, Egypt is located in the desert on the southern end of the Sinai Peninsula. Being on the edge of the red sea with a vast amount of biodiversity and marine life, this has become a top holidaymaker destination. What really shines here is the sun, all of the time. Average sunshine hours will be long no matter what season you decide to visit. Along with the sun shining, you will find little to no rainfall while on holiday. The sea is great for swimming, diving and snorkelling at any time of the year. With the average temperatures being high year round, you really cannot go wrong on when you choose to visit Shark's Bay.

Visiting Shark's Bay in the autumn will be just as good as the summer with high average temperatures, minimal rainfall and continued hours of sunshine, all with the added benefit of the crowds starting to disperse. September sees average temperatures rise to 30°C (86°F), October sees an average temperature of 27°C (80°F) while November sees the first large drop to 22°C (72°F). The average rainfall does rise from the summer months, but just slightly. September still sees an average of 0mm rainfall while October sees 2mm and November sees 1mm. The average sunshine hours start to lower, but are still sufficient for a holiday with September seeing 11 average hours, October seeing 10 average hours and November seeing 9 average hours. The average sea temperature is great for water activities in the autumn, September has an average sea temperature of 28°C (82°F), October 27°C (81°F) and November 25°C (77°F).

Shark's Bay in the winter will be sure to be a great holiday destination to get away from the cold. With its hot desert climate, winters are very comfortable here. The average temperatures will not be what you see in the summer, but it will still be warm. There will also be little to no rainfall in the winter months and you will still get more average sunshine hours than in the UK. Winter sees the lowest average temperatures for the year with December getting to 19°C (65°) and January and February getting to 17°C (63°F) the lowest average temperature for the year. December sees the highest average rainfall for the year with 4mm, January sees an average rainfall of 1mm while February sees an average rainfall of 2mm. The average sunshine hours are also the lowest for the year in December and January with 8. February sees 9 average sunshine hours. The average sea temperature drops but will still be good for water activities. December's average sea temperature is 24°C (75°F), January's is 22°C (72°F) and February's is 21°C (70°F), the lowest of the year.

Although Shark's Bay is located on the Red Sea, it is also the desert. As there are many day trips available that go inland, there are some things to consider when in a desert climate. The first being that temperatures can get extremely hot, 40°C (105°F) and up in some cases. Choosing appropriate clothing as well as using a hat to protect you from the sun's rays is a must. The second is avoiding dehydration, always have access to water and do not wait until you feel thirsty to drink as your body needs water before thirst kicks in. Third, heat illnesses can occur so you should be alert of any of the following symptoms: clammy skin, headache, excessive sweating, dizziness and weakness. This can easily be avoided by staying hydrated and avoiding long periods in the sun. With the proper precautions and awareness, none of these should become a problem for your holiday, but it is always best to keep in mind for a worst-case scenario. 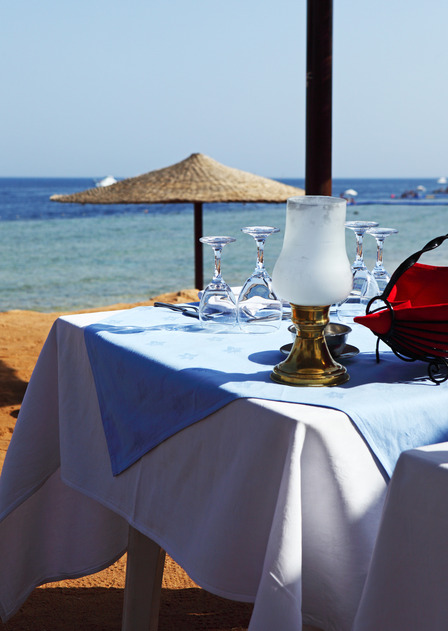