The latest and today's weather in Samos , Greece updated regularly

Samos enjoys a Mediterranean climate with hot, dry summers and mild, rainy winters. It is generally slightly wetter and cooler in the northern and western regions of the island and much cooler in the higher altitudes of the mountains. Samos is one of the largest of Greece's Cyclades Islands in the Aegean Sea. It sits just to the west of the coast of Turkey.

Summer, from June till September, receives almost no rain and an unbelievable amount of sunshine. The temperature soars, reaching an average high of 29°C in June, creeping to peak of 31°C in July and August and sidling back down to 29°C in September. The sun is inescapable, beating down for a staggering fourteen hours per day in July. In the peak of summer the sun only really disappears with the onset of night time. Nights bring cooler temperatures, around 17°C in June and September and 20°C in July and August, but even with the low humidity this can be a little uncomfortable.

Autumn, in October and November, sees cooling temperatures and a large reduction in sunshine. Early autumn is still gorgeous, perhaps even preferable to the peak summer months; the average high in October is 22°C and the sea stays at 21°C. While eight hours of sun per day is very good by northern hemisphere standards, it is quite a drop from the eleven hours per day seen in September. The weather becomes more unpredictable as the season progresses. November receives moderate rainfall, falling on around eight days in the month, a further reduction of sunshine and an average high of 18°C with cold nights around 10°C.

Winter, from December till February, is cool and wet. The average high temperature gets down to around 12°C in coldest January when the sun only comes out for five hours per day. It rains on around twelve days in each month. Rain is at its highest in December after which it decreases, though even without rain the sky often remains overcast. Average lows do not really fall below 5°C, but it can get down to freezing and frosts are not uncommon. It can often be very cold for prolonged periods and the sea remains too cold for swimming throughout the season. The erratic nature of the weather makes it hard to plan for. 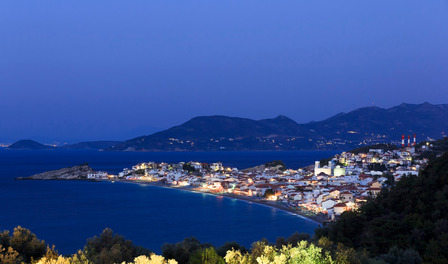 Spring, from March till May, sees the rapid return of summer conditions; the rain disappears with the clouds and temperatures gallop back up towards the summer highs, getting to an average of 20°C in April and a full 24°C in May. Night times remain cool, as does the sea, but this is a very pleasant time to visit the area due to the day time temperatures and the blossoming of plants after the winter rains.

Samos's climate is controlled mainly by the northwest mistral wind which cools temperatures year round and can be unpleasantly strong. However, it is this wind that attracts so many sailors and windsurfers to the area. The wind's direction means it is responsible for the wetter, cooler conditions of northwest Samos, and also the area's greener landscape. Samos is wetter than the other Cyclades in the winter, but just as dry in the summer.

The island is the birthplace of Pythagoras; in the south a municipality was named Pythagorio after the philosopher, best known for his contributions to mathematical theory.