The latest and today's weather in Murcia , Spain updated regularly

Located on the south-east coast of Spain, the region of Murcia has a typical Mediterranean climate. The province is small but encompasses an array of towns and resorts including La Manga, Cartagena, Lorca, Mazarrón and Águilas. Murcia's coast, the Costa Cálida, has 250km of sandy beaches while the inland regions are full of orchards, vineyards, castles and old Spanish villages.

The city of the same name, Murcia, is one of the most popular destinations in this region. It is an ideal Spanish city destination for those who want to escape the throngs of tourists in Valencia and Barcelona. Located about 50km from Alicante, the city has some beautiful architecture to see, including the ornate cathedral on Plaza Cardinal Belluga, which is a mixture of styles from Gothic to Baroque.

Like much of Spain, there isn't really a bad time to visit Murcia as the weather is brilliant all year round especially when you compare it to the weather in the UK. The area is lucky enough to have mild winters and hot summers without any heavy rain. In fact, the World Health Organisation names Murcia's climate as one of the most equitable in the world.

Murcia's climate is fairly consistent and therefore predictable, though the winter months are subject to some variation so it could be worth checking the forecast before you travel. In general the region boasts around 325 sunny days a year with an average temperature of about 19.3°C. 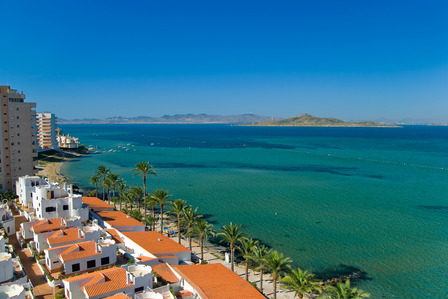 Spring sees Murcia start to warm up after the cooler winter and the initial trickle of tourists begins to flow. The temperatures are warm enough to swim and are perfect for outdoor activities in the regions many coastal areas. March sees an average temperature of 14°C, April is just about beach-compatible at 16°C and May is gorgeous at an average of 20°C with highs of 25°C. Very early on in the season low temperatures stop dropping into single digits and accompanied by 8 hours of sunshine, this is a lovely time to explore the region without the crowds or heat of peak-summer.

Rainfall at this time of the year starts to drop, not that it will ever be very high in Murcia, with just 20mm of rain throughout each month of April and May and a maximum of 8 wet days in the month. There's only around an 18% chance of rainfall, but the weather can still be a little unpredictable after the winter months, so be prepared for some spring showers.

Summers in Murcia are very hot with very little rainfall, only about 10mm per month at its lowest. The average temperature rises to 24°C in June and to around 26°C in July and August before slowly reducing back down to an average of 24°C in September. High temperatures peak at 30°C in June and September but reach amazing peaks of 32°C and 33°C in July and August respectively. It is best to try to avoid the sun between the hours of 12 and 3pm as the UV rating and heat are extreme make sure to pack plenty of sun-cream and drink enough water.

Due to its location almost 45km from the coast, Murcia City is significantly hotter than the coastal areas and experiences little cooling from sea breezes. The hottest day ever recorded in recent times was in July 1994 when the barometer skyrocketed to 47°C! Fortunately, low humidity helps to keep the heat bearable and after the peak of the day, afternoons can be quite comfortable. Exploring the streets of Murcia town is perhaps most pleasant during sunset around 8pm. The oppressive heat lifts but warmth still radiates from the buildings.

If you are on the coast however, you will appreciate the good amount of sunshine and lovely warm sea temperatures. June has the most sunshine with 10 hours per day. Sea temperatures vary between 22°C and 26°C throughout the season so taking a swim will be a lovely option, as is a lazy day sunbathing.

Autumn in Murcia sees the temperatures start to drop again and the throngs of peak-season tourists begin to leave. The average temperature returns to a comfortable 19°C in October and 15°C in November although highs still reach 25°C in October, before dropping 20°C in November. Autumn nights can be a little chilly, dropping to lows of between 9°C and 13°C, so it is recommended to pack some layers and a light jacket if you're visiting at this time of the year.

These layers will also come in handy if it rains, which is more likely now. October is the wettest month of the year with an average of 40mm of rain over 7 days. However, if you want to experience a more genuine taste of the region, autumn is a good time to visit. At this time of year, you can avoid the high prices of summer, enjoy quieter beaches and you are much less likely to come home with sunburn!

Winters in Murcia are very mild, particularly when compared to northern Europe. The months from December to February are still filled with clear, sunny days and low rainfall. January is the coldest month with an average temperature of 10°C and an average low of 5°C. The surrounding months are slightly warmer with peaks of 17°C. Sea temperatures are also chilly between 14°C and 16°C so you most likely won't be swimming.

Overcast and wet conditions are more likely than in the summer but do not dominate this season by any means. Rain falls on around 7 days in each month in short showers, with no more than 40mm per month in fact December is one of the driest months of the year with just 10mm of rain, and so a dry and sunny Christmas is likely. However, unlike the summer months, Murcia's weather throughout winter is known to be somewhat temperamental. You might enjoy a stretch of near 20°C days, only to wake up one morning to a grey sky, strong winds, rain and a pitiful 6°C. Despite this, Murcia remains a year round tourist destination.