Just as the average temperature in the Maldives tends not to fluctuate during the calendar year, the weather and climate remain stable across the entire region. While there is a little more rainfall in the south during the wet season, the temperature often peaks at an average of 30 degrees Celsius, with cooler periods registering an average 25 degrees Celsius throughout the year.

Located just to the southwest of Sri Lanka and India, the Maldives is an island nation that forms one of the most iconic locations to be found anywhere in the Indian Ocean. An extremely popular holiday destination, the Maldives is a tropical and perennially hot resort, and its climate displays very little change despite the fact that there are two distinct and well defined seasons.

As the northeast monsoon presides over a wet season that lasts from May to October, it provides a noticeable contrast of the period between November and April, when the sun shines for hours each day and the dry season draws holidaymakers from across the globe.

Despite this stability of temperature, however, climate change is providing a threat to the Maldives as a holiday destination and the island nation remains at significant risk of flooding in the event of increased carbon emissions and global warming. 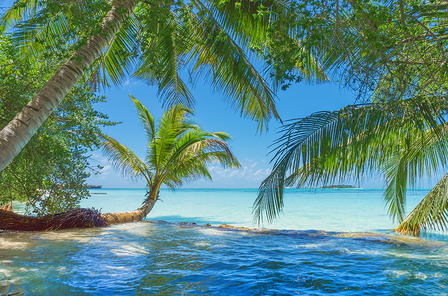 The dry season sees a huge influx of visitors, as people travel from across the world to sample the Maldives unique and exotic climate.

The dry season begins at the end of November, which culminates in the northeast monsoon and brings a spell of dry weather and sunshine until the beginning of the following April. There are an estimated 8 hours of sunshine every day during the dry season, during which the water temperature remains high at 25 degrees.

This is not to say that rain does not occur during the dry season, but it is minimal. This dry season also ends the onset of storms and raging winds, so the seas are calmer and also accessible to divers and swimmers. Temperatures usually register at approximately 29 degrees Celsius during this season, although the level of humidity is greatly diminished and this provides a far more comfortable stay for visitors from less tropical climbs. 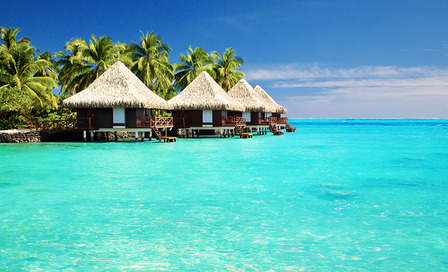 Overwater bungalows with steps into the amazing green lagoon of the Maldives.

Although the temperatures often soar to over 30 degrees Celsius and humidity rises accordingly in the wet season, the traditional summer and autumn months also see a great deal of rainfall and strong winds. Despite this, there remain a significant number of travellers who choose to visit the Maldives during this period, largely due to the amount of money that can be saved by booking flights and accommodation outside of the peak holiday season.

Lasting from the middle of April until the end of October, the wet season rarely experiences temperatures of anything less than 27 degrees Celsius, while its peak usually tips the 33 degree Celsius mark. The average amount of rainfall that tumbles on an annual basis is approximately 2,540 mm in the north of the island, and slightly higher at 3,810 mm in the southern region. The majority of this precipitation falls during the months of June and August, where visitors are also most likely to experience storms and high winds.

The reason why the south of the Maldives receives the majority of rainfall is due to the primarily southwestern direction of the monsoon winds. This is reflected in the average amount of rainfall that is recorded in individual regions, with southern islands such as Seenu registering an estimated 2300mm of precipitation every single year.

In contrast, the northern island of Baa averages an approximate 1800mm of rainfall during the year.

The heavy and persistent rain that falls during the rainy season varies from year to year, although the regional trends tend to remain the same regardless of the exact level of rainfall.

The climate remains a significant cause of concern for local government and environmentalists, however, and the president of South Pacific Island, Nauru, has claimed that the Maldives are in fact ranked as the third most endangered nation in terms of flooding from ongoing climate change.

Sea levels in the region have risen by more than 20 cm during the last century, and further increases could well threaten the shores of the Maldives and its tropical landscape. Its natural ground level is just a little under 2.4 meters, and sitting just 1.5 meters above the sea level. It is becoming increasingly precarious in the face of global warming and its own volatile climate during the wet season. With this in mind, the islands are undergoing something of a transition as it looks to improve its carbon footprint and preserve its mere existence.

This issue aside, the Maldives remains an extremely popular holiday destination, which boasts stunning natural beauty and a genuinely pleasant and consistent climate. Whether you choose to book your trip during the peak dry season or in the off-peak wet season is entirely dependent on your budget and personal preferences.

Those who enjoy the islands renowned scuba diving experience are best to visit during the dry season; travellers with little to spend may wish to save their money by booking an out of season excursion. Either way, tourists can bank on wonderfully warm weather and a more reliable climate than many neighbouring resorts.

Young couple snorkelling in clean water over a coral reef in the Maldives.