Hong Kong is home to a subtropical climate, dictated by its location south of the Tropic of Cancer. The climate is famed for being unpredictable. The climate is influenced by the monsoon systems, as in the southern parts of China. If planning a trip to Hong Kong it's best to have an understanding of the 'wet' and 'dry' seasons so it's best to plan what to wear and what to pack. Hong Kong receives an average of 1948 hours of sunshine per year and the mercury has never once fallen below freezing.

Summer in Hong Kong is the wet season; it is hot with regular, heavy rainfall. From May till September the average high temperature sits around the 30°C mark and average lows, occurring at night, sit in the mid-20s. The hottest temperature that Hong Kong Has ever seen is 36°C, though it's not uncommon for the mercury to sit in the 30's for many days of the year. The heat is accompanied by high humidity due to the heavy rains and this can be somewhat oppressive. Be sure to come with plenty of light cotton clothing.

Rainfall is high, increasing to a peak of 281mm in August. High rainfall is usually brought in on strong southwest winds. Generally, storms are intense but not dangerous, often accompanied by thunder and lightning. However, the typhoons which move northward between the months of July and September often bring to Hong Kong violent winds and flooding. Hong Kong is at risk of direct hits from these tropical cyclones (hurricanes) which can cause extensive damage and loss of life, usually by causing flooding and mudslides.

Despite the rain, this is actually the sunniest season as the rain is often brief and clears the sky of cloud or haze. July and August are the sunniest months with 7 hours of sunshine per day. 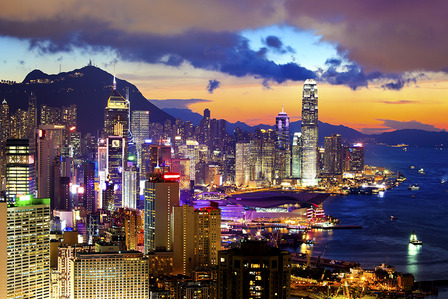 Winters in Hong Kong change quite dramatically from month to month. Initially, in December, the weather is still predominately sunny. However, as you move into February the weather becomes cloudier and cooler. Occasionally throughout February, there is a cold front that washes over the region from the north and with it comes strong cool winds. The average daily temperature sits at about 16°C to 18°C. With average highs of 18°C and average lows of 13°C in the coldest month of January. Rainfall is very low from October till March, getting to its lowest point in December and January.

The best time to visit Hong Kong is in the spring months when temperatures sit in the high 20's and the humidity isn't as high as in the rainy season. However, the months from February to April are generally cloudy; sunshine only averages about three or four hours a day. Autumn is also an enjoyable time to visit; it is usually sunny and dry, though it can be somewhat unpredictable and occasional rainfall is likely. 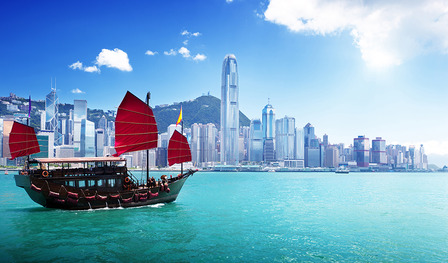 Hong Kong lies on the south coast of China, surrounded on its east, south and west by the South China Sea, lying just 60km from Macau, opposite the Pearl River Delta. The Hong Kong territory as a whole is made up of Hong Kong island, Lantau Island, the Kowloon peninsula, New Territories as well as 260 small islands. Hong Kong's coastline is long, irregular, rounded and home to numerous bays, rivers and beaches. In the very north-west of the New Territories, there are vast lowlands.

Hong Kong is one of the most important financial hubs in the world. Images of intense urbanization and overcrowding spring to mind when Hong Kong is mentioned and in the cities, they match reality. There has been a huge push to preserve the environment like Hong Kong is suffering from horrendous pollution; about 80% of the city's smog starts form parts of the Pearl River Delta.

Only 25% of Hong Kong is made up of developed land with the remaining comprised of mountainous terrain with fertile steep slopes. 40% of its 1104 square kilometres is made up of country parks and nature reserves. Most of Hong Kong's urban development lies on the Kowloon peninsula. Despite the territories being largely undeveloped the island of Ap Lei Chau is the most densely populated island in the world. In addition to the Kowloon peninsula, the remainder of the developments lie along the northern shores of Hong Kong Island and also throughout scattered settlements in the New Territories. 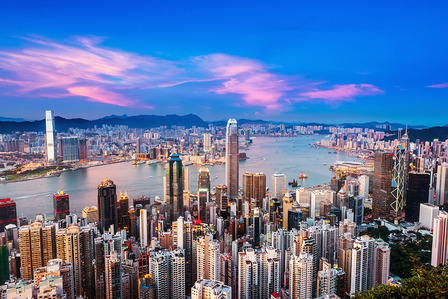 Hong Kong city in the sunset.