April is the beginning of the warmer half of the year in Santa Ponsa, Spain. From this month on, the area's fantastically long summer season is in full swing, with nothing but hours of sunshine that send the temperatures soaring to fantastic heights. Although April receives its share of rainfall, any wet weather is likely to dry up after this month is over, so expect nothing but a long and hot summer from here on out. It's no wonder that Santa Ponsa is such a popular vacation among holiday-makers looking to enjoy the sun.

The mercury keeps on rising in April. The average daily temperature is a comfortable 14°C, already three degrees more than it was in March. The daily low and high temperatures increase significantly as wellhey average 8°C and 19°C. Both temperatures rise in the course of the month. The average nighttime temperature increases from 7°C in the beginning of April to 10°C at the end, while the average daytime temperature rises from 18°C to 21°C. The sea temperature averages 16°C, one to two degrees warmer than January, February and March and the same as it was in December. Although it's rising steadily, it's not yet warm enough to go swimming.

April is the first month of the year that has a daily number of sunshine hours of two digits. The average day in April has 10 hours of sunshine, two hours more than the previous month, but still three hours less than the annual maximum that's observed in July. 10 hours of sunshine is nothing to complain about, though, and allow for plenty of time to do outdoor activities.

This increase in sunshine hours is caused by the gradual lengthening of the days and a small decrease in cloud cover. April 1 is the month's shortest day with 12.40 hours of daylight, while April 30 is the longest with 13.51 daylight hours significant increase. Taking into account the 10 hours of sunshine per day, you can conclude that much of the average April day is gloriously sunny. In fact, in April, the sky is clear or mostly clear 47% of the time and partly cloudy 27% of the time. It is overcast or mostly cloudy only 18% of the time.

April has a total amount of rainfall of 39mm, which makes it the fifth-wettest month of the year. Rainfall occurs on 8 days. The probability that precipitation occurs is essentially constant throughout the month. On any given day in April, there's a 32% chance that it will rain. By far the most common type of rainfall is moderate raint occurs on 47% of those 8 days with rainfall. Drizzle, light rain and thunderstorms are equally as likely to happenhey each are observed on 17% of those rainy days.

The four-star Hotel Bahia del Sol & Spa is situated just 200 metres from Santa Ponsa Bay and the beach. This is a place to be for sunshine, palm trees, soft sandy beaches and relaxing holidays. The hotel's 209 classic rooms all have their own private bathroom and most of them have a balcony that offers stunning views of the Mediterranean Sea. During your stay, you can enjoy the two outdoor pools, spa and wellness centre, gym, whirlpool, conference rooms, solarium and restaurant. Bike rentals are available as well.

The Boutique Hotel Playas del Rey lies only 300 metres from Pellicer Beach and 200 metres from Santa Ponsa Beach. It's located in a quieter corner of town, making it a preferred place to stay among couples and families. This classy modern hotel has a large outdoor pool with sun terrace, a sophisticated cocktail lounge, lush private gardens, a rooftop sun terrace, a restaurant and a TV room. If you're looking for a peaceful and relaxing stay in one of Southern Europe's best beach destinations, this is a valid option.

Boston O'Brady's is an Irish-American restaurant in downtown Santa Ponsa. It is often regarded as one of the better dining venues in the resort. It's very well-rated and guests rave about both the taste of the food and the size of the portions. The menu includes traditional pub fare, cocktails and beer. Definitely a recommended place for a fun night out!

Another Irish placelbeit a bit wilders Durty Nelly's. This is one of the most popular Irish live music bars in town, open during the day and showing all kinds of sports on big screens and in the evening featuring live music until the early hours.

The weather is warming up in April and although rain showers may still occur, this time of year is favourable for its mild temperatures and lots of sunshine.

A place you may want to visit is Katmandu Park in nearby Magaluf, a quick drive from the Santa Ponsa town centre. This alternative theme park has been voted as the best in the Balearic Islands and one of the best in Spain. It features an amazing 4D cinema, thrill rides, unexpected adventures and much more. There are more than 10 attractions, plenty of shows, parades and dances, souvenir and gift shops, and snack bars and restaurants. This is a fabulous place to visit with kidsnd even the most sceptic adults will have a blast as well. 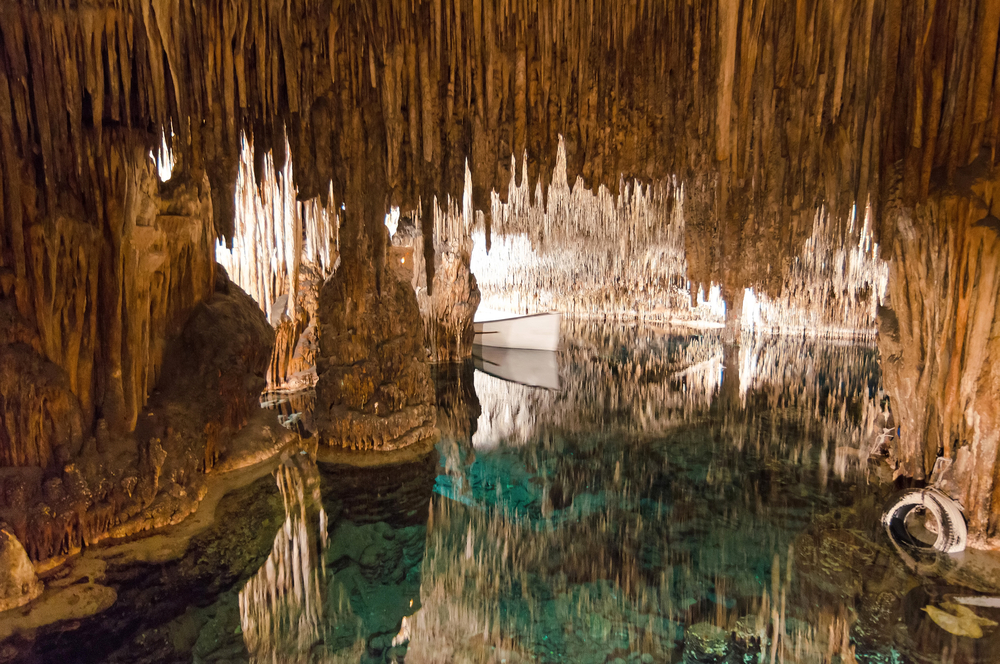 Something completely different, but also strongly recommended, is taking an excursion to the Caves of Drach. This half-day tour takes you to Majorca's largest caves where you can admire huge stalactites and stalagmites before enjoying a classic concert at Lake Martel. You'll also have the chance to cross the lake by boat.