Nabq Bay is a new district developed in Sharm el Sheikh, a resort and trading port in Egypt. Sharm el Sheikh has seven districts and a protected national park altogether, which has helped ensure the area as a favourite for deep-water snorkelling and diving. Apart from Nabq Bay, Naama Bay is also a popular spot for tourists.

As a new township, many new developments are taking place in this area and in recent months, Nabq Bay has been garnering attention as one of the most sought after tourist destinations. This new destination has an air of luxury, and gives visitors the expectation of seeing a wide variety of posh restaurants and hotels, as well as high class boutiques and shopping centres. Starbucks and TGI Fridays, as well as a Hard Rock Café are several new additions to this rapidly growing area. Nabq Bay, like its surrounding areas, is popular with tourists for its beaches, coral reefs and diverse marine life.

Almost all known major hotel chains can be found at Nabq & Naama Bay. There are also an increasing number of bars, clubs and restaurants. Visitors can choose from a variety of cuisines from Western to Mediterranean, Indian, Italian, European and even Japanese dishes.

The general weather in Nabq Bay is the same as Sharm El Sheikhot and dry with moderate winters. The climate is a sub-tropical climate like most of Egypt. Summertime is when the weather is at its hottest, which is during the last weeks of June and lasts until the end of September.

Temperatures are consistently over 35°C and at night time, the temperatures do not usually drop below 30°C. January is when the area is at its coolest, with recorded temperature at 25°C and night time reaching as low as 14°C. Nabq Bay also experiences mild winters starting from November until March.

Summertime begins around April and ends around October. Temperatures can soar to as high as 35°C, with an average minimum of 29°C at night time. Because of the extreme heat, summer is usually an off-season time for Sharm El Sheikh tourism. The area sees sunshine throughout the year, so tourists can expect to see an average of 12 hours of sunshine per day. Wind speeds can reach as fast as 56km/h, which is 35mph or 30 knots.

Water sports are abundant in Nabq Bay as the temperature is relatively warm and can be enjoyed by all visitors. Since Nabq Bay is a coastal township, the temperature of the sea is usually at an average of 23°C.

June to July has always been Naqb Bay's hottest and sunniest months, with recorded temperatures up to 38°C. Temperatures drop to an average of 28°C at night during these months.

During the day, water sports such as diving and snorkelling are enjoyed by all, as well as excursions to various tourist destinations in Egypt. At night, clubs and bars are open and night bazaars are also a common sight.

During summertime in Nabq Bay, remember to use sun block. It is also best to keep yourself properly hydrated as sun strokes and sun burns are pretty common at these temperatures.

There is also very little rainfall recorded annually, with the highest recorded amount at 2mm, which averages out to be about one day of rainfall per month.

Towards the end of October, expect temperatures to go down slightly, signalling the arrival of winter. 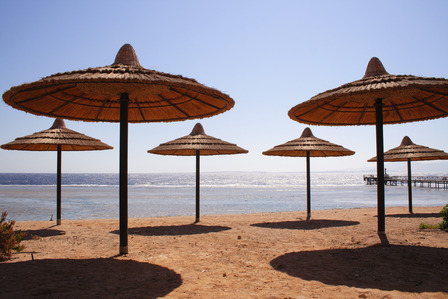 Wintertime is during the months of November through March. Temperatures are relatively cool, though visitors should not expect to see heavy snowfall along the coastline. Snow can be seen if you take a trip up to the mountains. Winter also brings in more rain, though it is still very rare in a desert climate. Believe it or not, this is high season for Nabq Bay as the temperatures are not too hot nor too cold. Even water sports can still be done during the day without the visitors experiencing discomfort.

Water temperatures can still be enjoyed at an average of 24°C during the last two months of the year. At this time of the year, many rare species of fish can also be seen, making this a favourite area for scuba diving.

The area of Sharm el Sheikh is susceptible to earthquakes, with the most recent on November 19, 2011 with a magnitude of 4.1. Seismic activity is frequent in the areas of the Red Sea and the Gulf of Aqaba. Sand and dust storms are also prevalent through the months of March to July as the area is at its driest. Foreign tourists are strongly advised to invest in a comprehensive travel insurance package that will cover overseas medical costs and medical evacuation.

The whole of Egypt is currently experiencing civil unrest and high threats on terrorist attacks are imminent. Hijackings and kidnappings have been regularly occurring since early 2012. Although Sharm el Sheikh and Nabq Bay are many miles away from Cairo, tourist spots have become an increasing target amidst all these unrest.

A number of shark attacks have been reported on November 30, December 1 and December 5 of 2011 where one tourist has died and three injured. Shark attacks are unusual at the Red Sea, though visitors are advised to take precautions and be updated with the local authorities.

Nabq Bay is definitely a beautiful tourist destination as it offers world-class amenities and activities as well as several chalets and hotels to choose your lodging in. No doubt, security is high for the whole of Egypt, especially tourist destinations, but if you are planning on travelling there anytime soon, be cautious of the political situation there as attacks are indiscriminate.