Located in the richly historical country of Egypt, the sandy, beautiful Naama Bay is a wonderful destination choice for vacation seekers. Located in the Sharm El Sheikh district, Naama Bay can be found nestled on the coast of the Red Sea.Due in part to its proximity to the Red Sea and being a coastal area, the weather in Naama Bay stays fairly consistent throughout the entire year. The weather is primarily divided into two major seasons, summer and winter. The overall weather is dry and arid, with occasional rainfall in the winter months. Naama Bay is comprised primarily of sandy, warm beaches, being a coastal development. The land is flat with rolling dunes and white sand, until you travel a bit more inland, where the terrain is more rocky and mountainous.

The bay is considered the heart of the district, and features a virtual paradise for scuba divers, snorkelers, and swimmers. The bay's waters feature diverse coral reefs that have been meticulously preserved, and a wide, diverse variety of colourful fish and marine life. The beachfront features numerous diving establishments, resorts, hotels, and other water-based activities. Glass bottom boat rides, parasailing, windsurfing, and kayaking are among the most popular. The consistently warm and dry weather all year long ensures that you will always be able to sunbathe on the beach, take a long, warm swim, or participate in any of the other various activities available in Naama Bay. Rain throughout the year is rare, even in the winter season, which only averages one or two days of rain. Cooler nights prevail throughout the year, allowing you to enjoy the nightlife within the bay or the nearby cities.

Summer in Naama Bay comes with hot temperatures, dry weather, and plenty of sunshine. You can easily expect temperatures to average between 28C and 35C throughout the entire season. Highs can reach upwards of 37C, with lows at night being a bit cooler, around the 34C range.The weather is very dry this time of year, experiencing little to no rainfall. This area hasn't seen rainfall during the summer season at all in many years, and it's very rare to experience any precipitation. The season lasts from late-May through mid-August. This is a great time to visit if you enjoy hot weather, sunbathing, and cooling off by swimming in the crystal clear waters of the Red Sea.

Winter in Naama Bay is a bit cooler, while still remaining warm and dry. This is the main season that the area sees any rainfall at all; however the average number of days of rain is only one to two per month for the season. The temperatures average between 15C and 22C. You can expect highs in the 24C range, and lows in the 13C range. The days are also a bit shorter, with the shortest daylight hours in December and January, giving only 9 hours of sunlight in a 24-hour period. However, during the day, even in the coldest month, you will still experience warm temperatures, though it is much more moderate than the hot summer season.

If you are unaccustomed to the high temperatures associated with summer, the winter season might be the ideal choice for your vacation. The water's temperature is still warm and enjoyable, and the moderate temperatures are conducive for spending your days sunbathing and relaxing on the beach. Winter lasts from mid-November through February.

Autumn in the bay is consistent with the summer season, with slightly cooler temperatures than in the summer. The temperatures will remain warm, while steadily decreasing as winter approaches. Rainfall is still rare, so you can expect dry conditions throughout the months, with average temperatures between 26C and 30C. During the day, temperatures can reach highs of 36C or so, while at night you can enjoy a more moderate range of around 23C or so. This is the perfect season for exploring the nightlife while still enjoying the higher temperatures of the day. Naama Bay is located near many popular tourist resorts, so this is the ideal season for excitement seekers, or those that want to enjoy the moderate night temperatures while taking advantage of a nightlife that's only a few kilometres inland.

Spring is extremely similar to autumn in both temperatures and weather. The temperatures are moderate, and warming up slightly from the cooler air of winter. Rain is rare, though occasionally a day or two of rain can occur. Average temperatures are between 20C and 34C, with the beginning of the season seeing cooler temperatures at night of the 16C range. Highs during the day can climb from 25C in the beginning of the season, to the warmer 34C as summer approaches. This season ranges from March through June. This is a great season for just about all types of travellers and activities, and tends to be one of the most popular. Considering the moderate temperatures, cooler nights, and dry weather, this is most likely the ideal travel time for all vacation seekers.

Naama Bay holds consistent weather patterns throughout the year, so regardless of when you are planning your stay, you can expect warm days, cooler nights, and drier weather. Because of this consistent weather, Naama Bay is a popular destination for many European travellers. It's in relatively close proximity to popular sites such as the St. Catherine Monastery, the Sinai Mountains, or the various markets, shops, and stalls found in nearby cities such as Sharm El Sheikh. 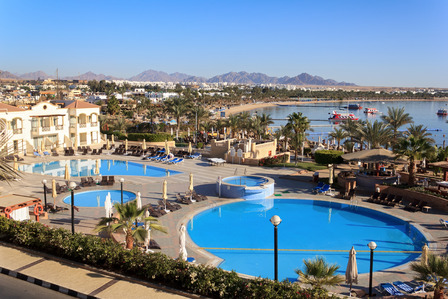 A number of marinas can be found along the coast, and many establishments have training and certification programs to teach scuba diving and other water activities to first time thrill seekers. The Bay is also located near the Ras Mohammed Nation Park, Egypt's oldest national park, and one of the most famous diving sites in the world. Other diving sites feature rich diversity, allowing for the exploration of shipwrecks, coral reefs, or viewing the breath-taking marine life. Whatever your interests may be, or the type of vacation you might seek from relaxing on the beach to exploring an ancient shipwreck, you can count on Naama Bay's consistent, welcoming weather and breath-taking landscapes all year long.