The Bermuda Islands sit off of the east coast of the USA in the North Atlantic Ocean on the same latitude as Charleston in South Carolina and northeast of Florida. The islands enjoy a marine sub-tropical climate, experiencing, warm winters and hot summers rarely seeing any extremes of temperature. It is milder than other areas at the same latitude due to its proximity to the Gulf Stream, and exposure to westerly winds and cold fronts of Arctic air. However, this also puts it in the path of hurricanes. Rainfall levels are moderate with no greatly pronounced wet or dry season.

Summer, from May till November, sees temperatures rise from the mid-20s to the low thirties then fall again. In Hamilton, Bermuda's capital, the peak of the summer season in July and August, reaches an average high of 31°C. Even the sea temperature can sometimes peak at 30°C. Humidity is at its highest in the hottest heat and as such conditions can become quite sticky. However, the reliable winds from the west usually have a moderating influence on the air temperature and few find Bermuda's heat unbearable. Bermuda is subject to many winds and while many assume that this creates ideal surfing and windsurfing conditions, southerly winds can be ferociously strong and water sports made dangerous. Bermuda is the southern part of a coral ring that provides protection to its northern regions resulting in calm waters unsuitable for surfing and windsurfing, but perfect for diving amongst the beautiful reefs. The southern side, exposed to the Atlantic, generally has better beaches. However, Hamilton pumps its sewage out into Hungry Bay, and every now and again visitors to the favoured southern beaches are treated to tides of human sewage.

The summer season sees many more hours of sunshine than the winter season: around eight or nine hours a day. Rainfall does not vary much throughout the year and can never be ruled out. Storms can be quite heavy and are generally unpredictable due to the Gulf Stream and the great number of cool winds affecting the islands. From June till November, with increased risk from August till October, these factors can collide to produce perfect hurricane conditions. Serious hurricanes occur around once a decade; the last one hit in 2003. Luckily due to the immense meteorological disturbance that leads up to the creation of tropical cyclones, they are often predicted with accuracy. Apparently, some locals still put their trust in shark oil as opposed to meteorologists; this oil is a mixture of liquid and sediment and its opacity is affected by air pressure; when a hurricane is coming to the sediment floats up and the liquid turns cloudy… possibly not the most useful tool in terms of advance warning. Also, some say it just doesn't work. Low risk leads many to be complacent when planning travel, but hurricane risk should always be researched before travelling to Bermuda, or to any other coastal area within the central region of the temperate zone. 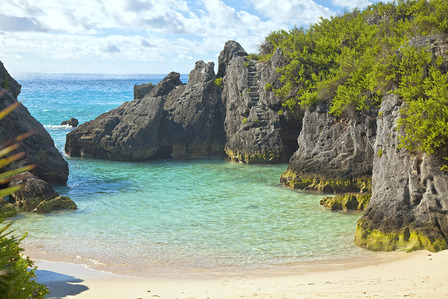 The beautiful secluded and romantic Jobson Cove Beach on the south side of Bermuda.

Winter, from December till April, is less sunny and the temperature drops. About four or five hours of sunshine can be expected each day, and the average high temperature is pleasant at 22°C. Humidity is extremely low and as a result, nighttime temperatures are actually very chilly around 13°C. Contrary to popular belief, the Bermuda Islands are not tropical and visitors are often caught out by this unexpected cold weather. If you seek warmth but are wary of blistering heat, this may be a better time to visit due to the relief of the cool nights, but the reduced sunshine can be a disappointment. The sea is definitely swim-able at 20°C, though locals think this is desperately cold. Again, rainfall is moderate and can be expected on the usual ten or eleven days per month, but coupled with an overcast sky, conditions can be less than ideal. High winds, and sometimes gales, often make the air feel very cold, even in the day time, occasionally forcing the 'felt' temperature down to freezing. However, it does not snow and frosts do not develop, and thanks to global warming the winters have been getting increasingly milder since the 1980s.

Perhaps the best time to visit Bermuda is in the early or late summer, either in May and June or November. These months avoid the peak of hurricane season, humidity levels are not even nearing uncomfortable and the blissful mid 20s average highs are complemented by cool nights. May and June see eight and nine hours of sun per day respectively while October only receives around six. The sea begins to warm up in early summer from 21°C in May, to 24°C in June. In October it cools down from the peak summer months and retains a full 25°C. 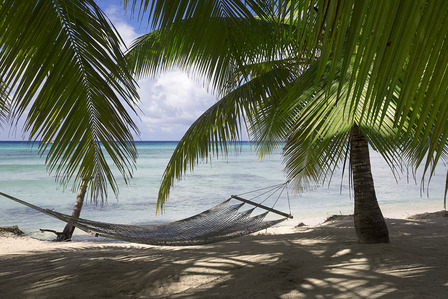 Bermuda in the early Summer.

Bermuda's climate can be attributed to its location in the North Atlantic Ocean, its gentle topography and to it being part of a reef circle. Low hills do not interfere much with the passage of winds over the island and as such no part of Bermuda is particularly free from the fickle conditions caused by the collision of different fronts. Its position on the edge of the Gulf Stream moderates cool extremes, and allows for Bermuda's thriving coral reef which is the most northerly reef in the world. The surrounding reef protects the southern waters and beaches. It's northerly, isolated position means it is not susceptible to monsoon winds, and also mean it is milder than the Caribbean Islands which it is associated with, but not part of. Bermuda is actually a British Overseas Territory.