What's the Weather like in Lloret De Mar in June

Summer gets into full swing in Lloret de Mar in June, with temperatures soaring up to 27°C during the day and with plenty of sunshine and blue skies. The evenings are a lot warmer, too, with the average low temperatures now at 14°C. Both the average high and average low temperatures have risen significant since May, respectively by four and three degrees, and they will keep increasing throughout the month. The highs increase from 24°C on June 1st to 28°C on June 30th; the lows increase from 13°C to 16°C. The daily average temperature in June is 21°C, making it the third-warmest month of the year, after July and August. The average sea temperature is exactly the same as the average temperature on land, 21°C, and is starting to get comfortable.

With no less than twelve hours of sunshine per day, half of a typical June day is sunny. This is one hour more than May, but still one hour less than the annual maximum of thirteen sunshine hours in July.

With a decrease in cloud cover also comes a decrease in rainfall. June suddenly receives much less rainfall than May. Now, the total amount of precipitation is 62mm, significantly less than the 87mm total of the previous month. The likelihood that it will rain also decreases in the course of the month. June 1st has a 38% chance of rainfall, while on June 30th the chance of rainfall is 29%. June still has ten days with rainfall though, so you should come prepared and bring at least a light rain jacket. There are only four months that receive more rainfall than June: April, May, October and November. Four types of precipitation are observed in June: thunderstorms, moderate rain, drizzle and light rain. Thunderstorms are the most common type and occur on average on 42% of the days with precipitation. Moderate rain is observed on 25% of the rainy days, drizzle on 17% and light rain on 12%.

Hotel Santa Rosa is a four-star hotel that is situated approximately 100 metres from the pedestrian shopping area and 150 metres from the beach. The hotel has 132 rooms in four categories, all equipped with all modern amenities: standard double, superior double, standard triple and family. Additional facilities are a 24-hour reception, a restaurant, a heated outdoor pool, saunas, Jacuzzis and a solarium, Wi-Fi and a bar on the sixth floor that offers amazing views of the resort.

The magnificent five-star Hotel Santa Marta is located in a six-hectare wood near Santa Cristina Beach. All 76 rooms have air-conditioning, satellite TV, Wi-Fi, a mini-bar, safe and bathroom. There are six different room types: Double Rooms with Park View, Double Park Pavilions, Superior Double Rooms, Junior Suites, Double Rooms with Sea View and Family Rooms. This hotel is a popular venue for weddings and other events. Other services and amenities include a cafeteria and bar, a large spa, a fitness centre, a bar on the beach, tennis courts, an outdoor pool, meeting rooms and a beach buffet restaurant.

You can work on your tan on one of the many beautiful beaches in Lloret de Mar. The most popular beach, Lloret de Mar Beach, is more than 1.5 kilometres long and boasts soft golden sand and clear waters. This is also the largest beach in the resort and is located right in the city centre. It is lined by many cafes, bars and restaurants and offers a wide range of water sports. Facilities on and near the beach are parking lots, shower with footbaths, beach lockers and toilets.

Café Bar Xaine is a suggested place to go for breakfast. In the morning you will have a choice of pastries, sandwiches and a great cup of coffee. During the day Café Bar Xaine serves cakes, soups, soft drinks and cold beers. Later on, you can go there for cocktails and long drinks and a classy atmosphere.

Mas Romeu Restaurant is located in the hills behind the city centre and serves lunch and dinner. A take-away option is available as well. The menu consists of traditional and Catalan dishes; specialties are fisherman's paella, grilled snails, aubergines with shellfish, foie gras and apple with vanilla oil, green pepper or Roquefort steaks, and Valencian paella. 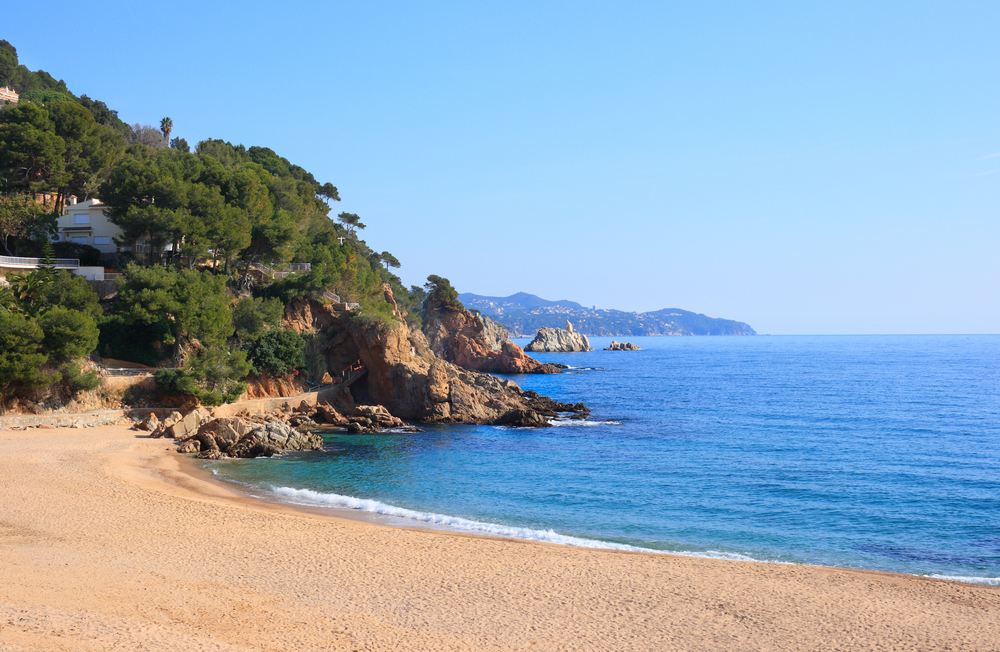 Things to do in Lloret De Mar in June

Only two kilometres from the resort you can visit the ruins of a settlement that dates back more than two thousand years. A former watch post of a larger town, Puig de Castellet commands a view of almost the entire coastline and consisted of defence towers and fortified walls. It was occupied between 250 and 210 BC and laid out in a shape that's somewhat between a pentangle and rectangle. Many rooms and facilities have been excavated and can be seen and explored. Tickets cost 3 euros for adults and 1.5 euros for seniors, disabled persons and students.

You can also see the beautiful coastline of the Costa Brava from a different perspective on a boat trip. There are many boats catamarans, sailboats, motorboats, that leave Lloret on a daily basis and call at other resorts in the region, such as Malgrat de Mar, Blanes, Tossa de Mar and Calella. It's a fantastic way to enjoy the sunshine and explore more of this beautiful Mediterranean corner. All-inclusive boat trips can be booked as well; they include on-board barbecues and cold drinks.