Lloret de Mar has a mild Mediterranean climate with hot summers and cool winters. It is situated on the Costa Brava in Spain. It is a popular place to visit due to weather conditions which far surpass those of northern Europe, especially during the sunny summers.

The Costa Brava is the northernmost of Spain's beach resorts with Lloret de Mar situated around the centre. It has a cooler climate in comparison to the rest of Spain due to the cooling effect of the Mediterranean Sea and the increased rainfall this encourages. This is by no means negative as it results in a greener countryside and less extreme heat in the summer. It still gets incredibly hot, but not to the extent of southern and inland regions.

The average daily temperatures range between 2°C and 29°C throughout the year. They rarely drop below -2°C or exceed 33°C. The warm season lasts from mid-June to mid-September, with an average daily high temperature above 26°C. The warmest day of the year is July 27th.

The amount of sunshine also reaches its maximum in July when the average day sees 13 hours of sunshine. June and August come in second with 12 hours. The minimum amount of sunshine is unsurprisingly observed in January and December, both with only 7 hours of sunshine per day. Still, this is more than other places can expect to see in winter and enables a sunny holiday, even if the temperatures are a fair bit lower than summer.

The cold season falls between mid-November and mid-March, with average high temperatures below 16°C and more common temperatures of 8°C. The coldest day of the year is January 4th.

Cloud cover varies in the course of the year. There are two annual peaks in cloud cover: April and October, with a yearly maximum of 45% on April. In between those two peaks, cloud cover drops to its yearly minimum of 30% on July 23rd. The clearer part of the year coincides with the summer season, enabling those long sunny and hot days.

As the amount of cloud cover and precipitation are related, there are also two annual peaks in precipitation. These peaks are observed from April through to May and from October through to November. Rainfall is most likely on April 28th with a 42% chance. It is least likely on January 10th with a 25% chance. July also experiences a significant decrease in rainfall with an average chance of 28% of rainfall, before the amount increases again towards its second peak on October 1st, which has a 35% chance of rainfall.

There are four common types of precipitation in Lloret de Mar: thunderstorms, moderate rain, drizzle and light rain, occurring respectively on 30%, 30%, 21% and 13% of all days with precipitation. 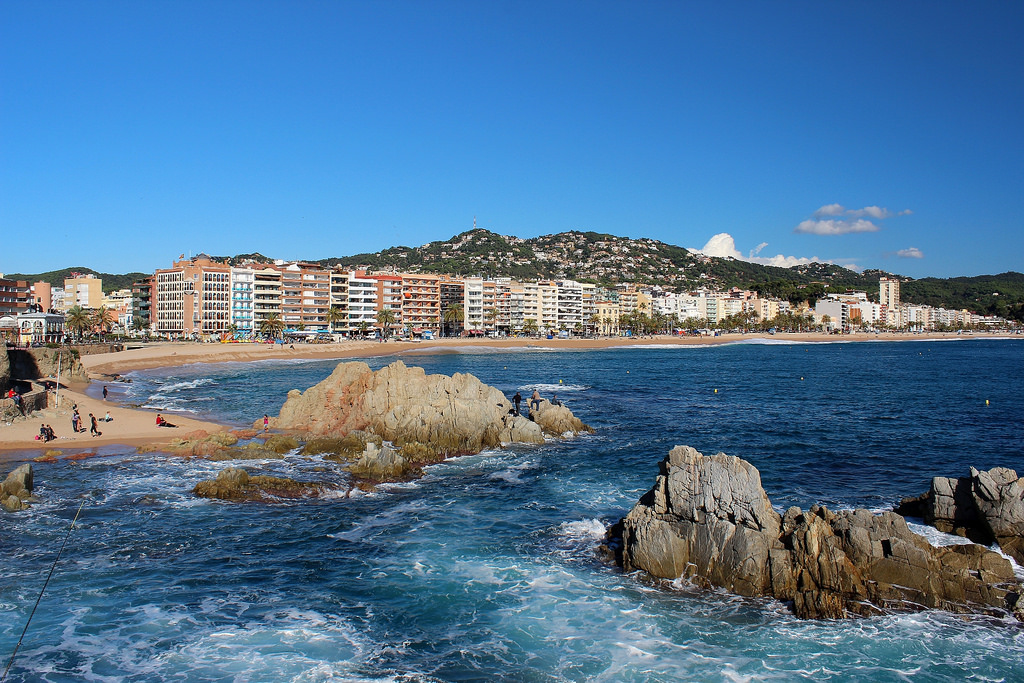 Lloret de Mar is hot and humid during summer, reaching an average high temperature of 29°C in July and August which are the hottest months of the year. May, June and September regularly see day time temperatures in the pleasant mid-20s with lows that do not go down below 14°C so light layers and sun-cream are advisable for these conditions. Most importantly, sea temperatures reach a lovely 26°C in August and are still 24°C in July and September so this is the perfect time of year for sunbathing and cooling off in the water.

Even in April and October an agreeable level of warmth can be expected in the afternoon. However, on these early and late summer nights it does cool down, with temperatures often hovering around 10°C. Even during peak season tourists might experience mild nights with temperatures around 17°C.

In the peak of the season Lloret de Mar receives around 12 to 13 hours of sunshine a day, with not a great deal less to be expected in the beginning and at end of the summer, with 10 or 11 hours a day. While early summer might be seen as more unpredictable, days of sunshine are still guaranteed and the slightly cooler temperatures can be more comfortable and the crowds considerably smaller.

For this reason, June and October are recommended as the perfect times to visit this area of Spain, but if you prefer intense, uninterrupted heat then the peak of the season will suit you better, especially as October sees the odd rain storm with 79mm of rain, behind May's annual peak of 87mm.

Lloret de Mar'swinters are cool and sometimes even cold, but you won't see much rain at least. At its coldest in January and December, average highs around 13°C do not illustrate the fact that it can often get very cold, dropping to 2°C sometimes. While snow is very rare, it has been known to occur. Anyone visiting at this time of year should pack clothes suitable for the cold.

The days are also considerably shorter, with December seeing around 7 hours of daylight. It is generally more overcast at this time of year, though not unpleasant by UK standards. Rainfall tends to affect about 9 days of each winter month, with varying amounts and the sea temperature reaches its annual low of 13°C in February, so swimming will no longer be possible.

If you would like to see how these figures are calculated please visit this page.

Generally though, for at least 9 months of the year, Lloret de Mar is a very pleasant resort to visit, with a mild Mediterranean climate and enough rainfall to guarantee lush green landscapes, whilst high summer temperatures and lots of sunshine makes it the perfect beach destination.