Despite the amount of sunshine not decreasing, the temperature of the ocean does. The average sea temperature in December drops to 14°C (57°F), which is considered too cold to swim, even just for a quick dip.

The average humidity in December remains the same as in November, 70%. Despite this being on the higher side for humidity levels, the mild temperatures this month will largely make the humidity unnoticeable and will not cause discomfort.

Los Guanches Bungalows is a complex consisting of five bungalows for rent. Each bungalow contains two bedrooms with a twin bed each, a bathroom, a fully-equipped kitchen, and air-conditioning. Outside of each bungalow is a full and carefully maintained garden. There is also a "solar-heated" swimming pool with a terrace and sunbeds for guests to relax on. The complex is in a rural, but safe, area away from the loud noise of many parts of the island. Guests also have the option of renting a car for 110 a week and it can be picked up from the airport. The bungalows are about a 30 minute drive west of Santa Cruz.

The Hotel Valle Aridane is a three-star hotel with 43 rooms. Each room has twin beds, a full bathroom, a TV, and a desk. Most rooms also have balconies with mountain views. They also have a rooftop terrace with sunbeds and other furniture for enjoying the sun and the spectacular views of La Palma's nature. A buffet breakfast is served on their restaurant terrace, which includes fresh fruit from their personal farm on the island, or breakfast can be enjoyed from the rooftop terrace. Their receptionists are available 24 hours a day and can assist with the planning or booking of any activities on La Palma. The hotel is about a 40 minute drive west of Santa Cruz. 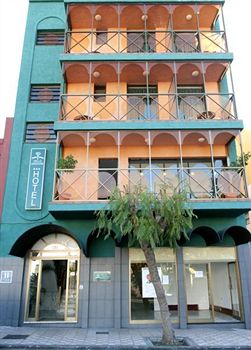 La Palma offers a variety of bus tours and they are a convenient way to see a part of the island you may not otherwise have. There are a variety of options, most of which pick passengers up from various destinations in La Palma, before being taken to a popular attraction. Here, guests will depart the bus and be able to explore the site, some of which are hikes through forests. Along the ride to the site (or sites), passengers will often experience wonderful views of less popular parts of La Palma, like natural ravines and uninhabited coastlines. Lunch is not included and guests are asked to bring their own food. Booking online is recommended and based on the trip you select, will determine where in the city you are picked up.

If you enjoy wine and want to learn about the history of it in La Palma, check out the Museo del Vino. This museum takes it guests on a journey into the past to discover wines first appearance on the island, which happened in the 16th century when the first grape vines were planted in La Palma. This will include information on the production of wine, the grape types in this region, and where specifically vines grew. Traditional machinery for making wine is also on display. There is also a chance to try wine, as two tastings are included in the entrance fee. The museum is open from 9:30 AM to 1:30 PM and 4 PM to 6:30 PM on Monday through Friday and from 9:30 AM to 2 PM on Saturdays. It is about a 40 minute drive southwest of Santa Cruz.

Cala de Martin Luis is a small cove with a beach. The beach is made up of volcanic, black sand mixed with pebbles and is about 80 metres long by just five metres wide. In ancient times the people of La Palma and those visiting used it as a natural jetty and pier. There is a moderate swell at this beach and is generally safe for swimming. There are not many facilities here, but they do have showers. There is not much accommodation nearby either (in fact the beach is surrounded by banana fields), so your best option for food is to drive about 15 minutes into Santa Cruz, where there are unlimited options. 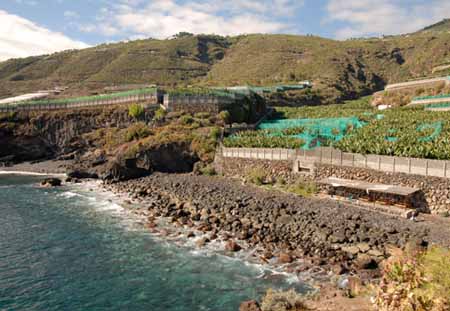 Where to eat and drink

Tiuna offers a menu that consists of mostly local dishes, with traditional takes on soups, stews, fish, and meat. They also offer some international options like pizzas. There is a coffee bar with an outdoor terrace and a large wine list as well. In addition to putting an emphasis on delicious food, Tiuna also wanted to create a memorable atmosphere. They did so by putting windows of all sides of their restaurant, creating marvelous views of the nearby sea and mountains. They are open daily and are about a 12 minute drive south of Santa Cruz.

Bar Arepera El Encuentro is a favorite among locals for their mix of Venezuelan specialties and local dishes. Many of the Venezuelan options include a corn (maize) shell and are then filled with various options, like meat and vegetables. There is also a selection of tapas, like grilled sardines, as well as bigger options like grilled tuna. Their drink menu is lovely with both wine and beer, but also with freshly squeezed and refreshing fruit juices. Their prices are very cheap, especially considering the delicious food, but be patient as the service can be slow. There is also a great terrace perfect for enjoying your meal in the sun. The restaurant is conveniently located in Santa Cruz. 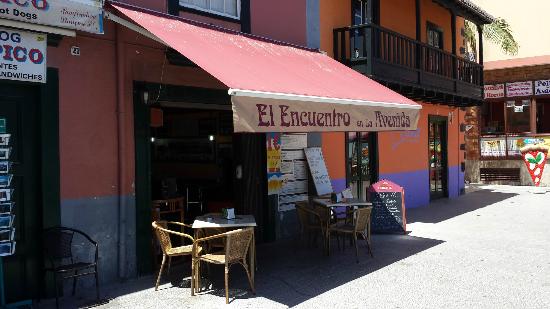