Hisaronu Weather for May 2021

The average temperature in Hisaronu in May is 19C, with highs of 25C. The highest temperature ever recorded in the area at this time is 36C; very hot indeed. Temperatures do drop off overnight to a low of around 13C, but it really shouldn't feel too cold. The heat will feel a little more manageable thanks to humidity levels of less than 60%, and Hisaronu will be a little fresher than other coastal areas thanks to its slightly higher altitude.

It's a similar story across the country, with average temperatures of 19C in Izmir and 20C in Alanya. It tends to be slightly cooler year round further north in Turkey, which accounts for a slightly lower average temperature at this time of year of just 16C in Istanbul. There are also fewer sunshine hours on average in Isanbul; just 9 May, in comparison to 12 in Hisaronu, Izmir and Alanya on the south coast.

With 12 hours of sunshine on average each day, and sea temperatures of about 20C, sunbathing and catching a few hours on the beach isn't out of the question.

There are likely to be a few short showers on some days and a little cloud cover, though this becomes less and less the case by the end of the month. The average rainfall in Hisaronu is just 27mm over 12 days, a sharp decline from the very wet weather of just a few months past; January sees rainfall averages of 187mm over 18 days in Hisaronu, not to mention the likelihood of thunderstorms in areas at higher altitude.

Hisaronu Hotels In May

Opened in May 1994, Hisar Holiday Club is very popular with European visitors. The a la carte restaurant serves excellent food, or try the fast food restaurant or one of the four bars, which serve lunchtime snacks and offer evening entertainment. The award-winning Turkish bath offers opportunities for pampering and a little luxury, and with a large outdoor swimming pool, relax area, children's play area, mini-market and sports facilities, there is plenty to keep every guest entertained. The delights of Hisaronu are close by, saving on bus and taxi fares, and buses to lüdeniz and Fethiye stop right outside the front door.

The Destina Hotel is an excellent choice for a budget holiday, with a full range of facilities which do make it really very good value for money. There are two outdoor pools, one of which is for children, a sauna and Turkish bath, and a courtesy bus runs to the beach. The décor is clean and modern, and the rooms very comfortable.

The all-inclusive Telmessos Hotel is ideal for families and couples on a budget holiday in Hisaronu. It boasts a central location surrounded by shops, cafes, bars and restaurants and offers a fantastic swimming pool complete with waterslides.

Hisaronu Beaches For May

The 4.5km long Turtle Beach in Dalyan is one of the few Mediterranean nesting sites of the loggerhead turtle, and protected by special rules. It's an excellent place for swimming, and open to the public so long as they avoid the marked turtle nesting sites. The beach is accessible by road, or from the Dalyan River, and minibuses run from Cumhuriyet Meydanı, in the centre of Dalyan, every half-hour in season. Sun beds and umbrellas are available for a fee and the gently sloping beach is ideal for families though there are warnings not to swim too near the river mouth because of strong currents. 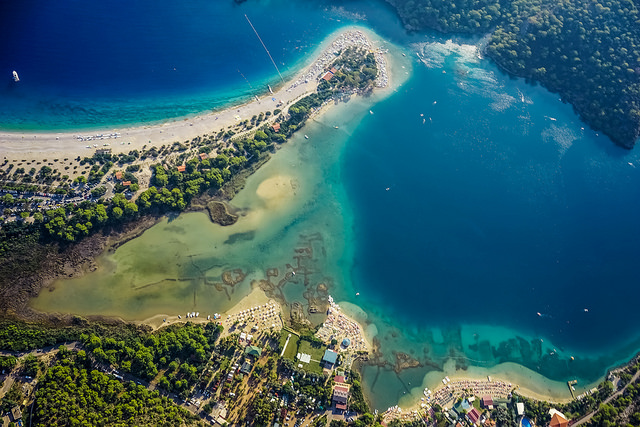 Belcegiz Beach in Oludeniz is a mixture of fine shingle sand and pebbles. You wont find high rise hotels and such in Oludeniz as it is set in a conservation area, and therefore has retained some of its natural beauty. There are various activities available on the beach, including water skiing, snorkelling, scuba diving, parasailing, banana boats, pedalos and canoes. There are plenty of bars and restaurants along the front, offering everything from a Kebab to a three course meal. There are also camping areas for backpackers and lively evening entertainment in the bars. Oludeniz has also become something of a mecca for paragliding enthusiasts, who come from all over the world.

It's practically impossible to come to Turkey without being offered the ubiquitous Turkish tea or coffee. Both are absolutely delicious. The coffee tends to be a little bitterer than Europeans are used to, but add some sugar and it's quite palatable.

The Grand Boozey is one of Hisaronu's nightlife hotspots, and very popular with tourists in high season. The place gets very busy after 11pm, playing loud music of the pop and R&B variety, and the beer is reasonably priced. Watch out for the imported spirits, which will set you back a bit.

The Gap Bar serves international food for affordable prices from first thing in the morning until last thing at night. Whether you're stopping by in the morning for a full English breakfast, or popping in late at night for a quick drink, the staff will always be pleased to see you and do their most to make your visit memorable.

Things To Do In Hisaronu In May

Camel trekking is very popular with tourists, despite the notoriously testy nature of these beasts. Travel to Fethiye offers adults and children the opportunity to take a camel trekking tour from Oludeniz, Hisaronu or Fethiye which includes a brief history lesson about the Kayakoy village (Ghost Town) before you begin your journey from the camel farm. The ride takes place through small paths, accompanied with a beautiful backdrop of traditional village houses, green meadows, fields and gardens, making a short stop at the old cemetery for a talk by the guide about Islam and mosques. Lunch takes place shortly afterwards, and consists of Turkish traditional pancake (Gozleme), Ayran, or Turkish Tea before you return.

It's an early start but short flights operate daily to Istanbul, where you can spend the day exploring Turkey's fascinating and beautiful capital city. The Hagia Sophia dominates the skyline in the Sultanahmet area of the city, and is an absolute must-see. One of the most visited museums, the current building is its third construction (it began life on the same site as a church during the reign of the Romans, which was burnt down, rebuilt, remodelled, knocked down and rebuilt again, transformed into a mosque and in 1935 finally designated a museum by the Council of Ministers). The interior has a fascinating history in its own right, but is also home to a number of historically significant collections including some beautifully restored pieces that date right back to the first Roman building on the site.

Cool off at the Grand Ucel Aqua Park located in Fethiye, just a short distance from Hisaronu. It is the largest water park in the area and features six brand new slides, fun-filled children's area, Jacuzzi and large swimming pool. Tickets can be purchased for very low prices and children under five get in for free.