December is the start of the rainy season in Hisaronu, and it's likely to be very wet indeed. Thanks to Turkey's temperate Mediterranean climate, temperatures don't tend to fall too low however and it should still be quite pleasant for sightseeing and outdoor activities that can be timed around the occasional shower.

The average temperature in Hisaronu in December is 8C, with highs of 10C. The lowest temperature ever recorded at this time in the area is -1C, and overnight the temperature will drop significantly to around 5C.

Sea temperatures fall to around 18C, and while there are still 7 hours of sunshine each day and the weather is likely to be fine for sightseeing, but really far too cold for sitting on the beach or hanging about outside.

December sees the worst of the wet weather in Hisaronu with rainfall averages of 197mm over 20 days in the month; it's likely to be very wet indeed. Rainfall at this time of the year often takes the form of prolonged showers and areas at lower altitude may see some flooding.

The Tumen Hotel offers simple but comfortable accommodation, in a central location with easy access to the restaurants, bars and shops of Hisaronu. Facilities include 24hr reception with safe deposit box rental, swimming pool, children's pool, restaurant, bar and billiards.

The small, mid-range Garden of Eden Hotel has all the facilities you would expect including a lovely a la carte outdoor restaurant, pleasant garden, swimming pool and poolside bar. All rooms are comfortably furnished and have access to a balcony, so you can soak up the sunshine in your room if you prefer. There are BBQ nights and evening entertainment is offered high season.

The Ova Resort Hotel is situated in a quiet part of Ovacik, away from the main route to Oludeniz and built in the with terracotta roofs, ochre-and-blue paintwork and wooden balconies which is the regions traditional style. Rooms are very stylish, with clean, modern décor and plenty of space. The restaurant serves a range of Turkish and international cuisine, and snacks are available at the poolside bar during the day.

Hotel Cypriot is the ideal place for families and couples looking for comfortable accommodation on a budget. In addition to a large selection of rooms to suit all pockets, this hotel offers free WiFi, Jacuzzi, swimming pool, bar, restaurant and complimentary breakfast buffet.

Café Umut serves a lovely range of coffees and desserts, as well as offering delicious breakfasts and light lunches. The sandwiches are very good, and there's plenty of familiar offerings on the menu.

If you fancy a Chinese, try Dragonaro. Less popular than some of the other Chinese restaurants, it's nonetheless very good and has a menu full of familiar classics. The food is cooked fresh and service is friendly and prompt. The prices are quite reasonable, and it's perfect for an evening meal.

Things To Do In Hisaronu In December

A trip to nearby Dalyan comes highly recommended, and one of the absolute must-see sights is The Kaptan June Sea Turtle Conservation Foundation at the south end of İztuzu Beach. Established in 2009, largely through the influence of June Haimoff whose reconstructed baraka (beach hut) now serves as a small museum to her life and work, the centre can be visited by guided tour. You'll see turtles injured by fishing hooks, nets and boat propellers being treated, and get a sense of the important conservation work taking place here.

Although you won't be spending days lounging on the beach, December is a great time to do a little exploring. Fethiye is only a short bus ride away from Hisaronu and is packed with things to see and do. You can explore the rock tombs, splash out on a boat trip, wander around the market, marvel at ancient ruins or see the deepest gorge in Turkey in this fascinating resort.

Head to Dortnal Ranch for the chance to explore Turkey's natural beauty on horseback. The ranch will send a bus to pick you up from your hotel and transport you to the ranch where an experienced trainer will pair you up with the perfect horse for your experience. You'll trek through the woodland and over a small mountain, stopping along the way to soak up the vistas, before returning to the ranch. 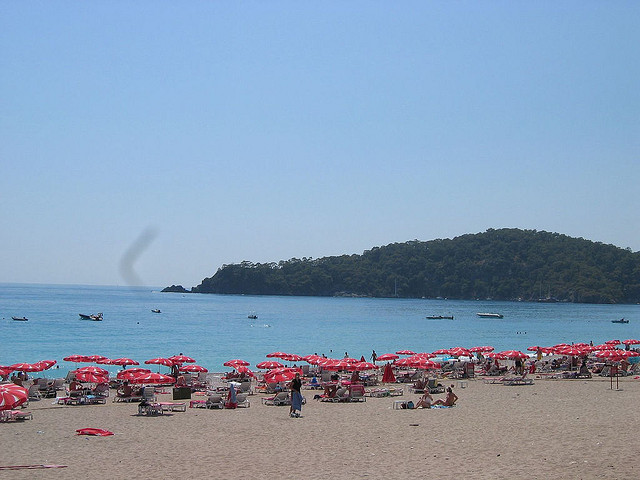 There's plenty to see in Dalyan, though the town itself remains relatively unspoiled. The famous Lycian-style Kings' Tombs in the cliffs across the Dalyan River, southwest of the centre, can be viewed on one of the many boat excursions available from Marmaris, Fethiye or Dalyan itself. These ancient tombs date back to around 400 BC, and were the resting place of the kings of the ancient city of Kaunos. Some are just simple chambers, and others more complex temple tombs with false walls to hide the treasures laid to rest with the kings (unfortunately long since looted).

It's an early start but short flights operate daily to Istanbul, where you can spend the day exploring Turkey's fascinating and beautiful capital city. Galata Tower has dominated the Beyolu district of Istanbul's skyline since 1348 and still offers the best views of the city. Originally named the Tower of Christ, the 66.9m high tower was the highpoint in the city walls of the Genoese colony of Galata. There are a number of very entertaining myths associated with the tower, but people really come for the view.