Belgium has a temperate, maritime climate principally influenced by air masses from the Atlantic.

Belgium's climate is moderate, with hardly any extremes in temperature throughout the year. It rains frequently so a raincoat is a good idea. Temperatures are lowest in December and January when they average 6°C and highest in July and August when the temperature can average at 23°C.

Night shot of historic medieval buildings along a canal in Bruges, Belgium.

Winters are damp and cool with frequent fogs and summers are rather mild. The annual average temperature lingers around 10°C. Brussels, which is in the country's centre, has a mean minimum temperature of just below freezing point in January and an average maximum of about 22°C in July.

Regional climatic variations are determined by altitude and distance from the sea. The more inland the more maritime influence becomes weaker, and the climate becomes more continental; categorised by a greater range of temperatures. 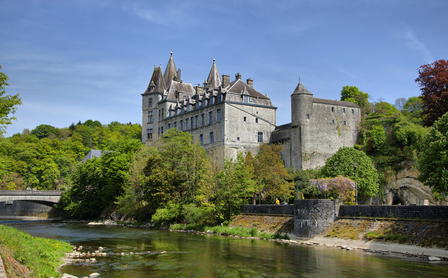 Durbuy Castle and Ourthe river in Wallonia region of Belgium

The Ardennes region; the highest and farthest inland, is by far the coldest. In winter, frost occurs for 120 days on average, snow falls for 30 to 35 days, and January's average minimum temperature is lower than anywhere else in the country. In summer, the elevation neutralises the effect of distance inland, and in July average maximum temperatures are the lowest in the country. Because of the topography, the region has the highest rainfall throughout all of Belgium.

On the coast, the annual rainfall is the lowest in the country. The climate is mild and humid. Unlike the interior, the temperature variations are a lot lower. In the south-easterly districts, hot summers alternate with cooler winters.

Citadelle and houses at the shore of the Meuse river in Dinant, Wallonia, Belgium.

The Antwerpen region has a mild, maritime climate, with temperatures typically ranging from 0°C to 24°C over the duration of the year. The city has a fairly wet climate, and rain can be expected at any time of year, although most rain falls in December, July and August. Summers tend to be pleasant and warm, yet never exceedingly hot. Throughout the year, it's not likely to have repeated days of continual sunshine.

West Vlaanderen also has a maritime climate, characterised by moderate temperatures, cloudy skies and regular, abundant rainfall. Summers are typically not extremely hot but the region does experience warmth and sunshine. Although winters in West Vlaanderen do not get as cold as the northern regions, it can enjoy snow every once in a while. If the cold holds for a few days, plenty of residents travel to the south to enjoy a day of hiking, downhill or cross-country skiing. Spring and fall are generally fair in temperature but loads of rain can be expected.

Luxembourg's climate is temperate and generally quite cool. Summers are usually chilly, with an average temperature of around 17°C. Winters are rarely severe with average temperatures ranging between -2°C to 0°C. The high peaks of the mountains shelter the region from harsh north winds, and the prevailing north-westerly winds have a cooling effect.