Now that fall has arrived in Mallorca, visitors will find much to do there by way of shopping and sightseeing.

This is not to say that the beaches are closed, but they are beginning to become less populated.

For some tourists, that is a draw. The 10 million visitors that come to Mallorca annually can provide some difficulty in finding a perfect beach spot. Those who go in the later months such as October can enjoy the beauty of the sea without the crowds and extremely hot temperatures.

Shopping can be done on Sundays in any of the markets that open year-round in the cities of Alcudia, Santa Maria, or Sa Pobla or on Wednesdays in Sineu.

The traditional Spanish displays of bravery, bull fights, began entertaining crowds in March and will conclude during the month of October, so visitors during this month should definitely make plans to see one of these events steeped in culture and history.

It is a nice time of year, weather wise, to tour the capital city of Palma on one of the Council of Tourism of the Balearic Government's 4 different guided tours.

In addition, tourists can take a relaxing ride on an old train from Palma to Soller about 17 miles (28 km) away and see a more scenic view of the island that most people never get to experience. 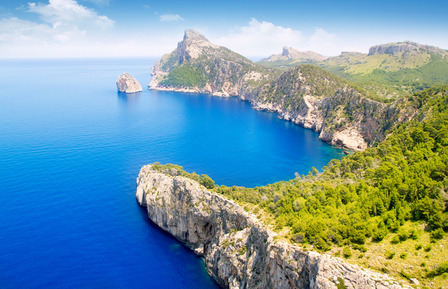 The average number of days per month with precipitation is 7.

The average hours of sunlight daily are 7.