The latest and today's weather in Heraklion , Greece updated regularly

The month with the highest rainfall is the wintery December, seeing an average of 100mm falling over 14 days. The months with the lowest rainfall are the summer season of June, July, August and September which only see 10mm of rainfall falling. The maximum hours of sunshine per day in Heraklion is 12 hours in the summer months of June and July while the lowest hours of sunshine is 4 hours per day in the winter months of December, January and February.

Heraklion is located on the north coast of the island of Crete, which belongs to Greece, and it takes around 6 hours to fly there from the UK. Most tourists pick this destination for the lovely summer weather, good food and beautiful beaches. There are also many sights of historical interest if you are travelling slightly out of season to avoid the crowds but make the most of the mild spring and autumn weather.

The summer months in Heraklion, Greece start from June, last till August and see the highest average temperatures throughout the year.  In June, the average temperature is a very warm 23°C increasing to 25°C in July and August which is the highest average in the year. During the summer months, temperatures can reach highs of a hot 27°C to 28°C with evening lows of a warm 19°C to 22°C. Even when the temperature is at its lowest, 19°C is still warm enough to enjoy days out and do all the things you planned. However, you can always check the weather forecast before booking any days out.

From June, the average monthly rainfall is just 10mm falling over an average of 1 day which remains essentially the same through July and August meaning these are the driest months of the year. June and July will also have 12 hours of sunshine which is the highest in the year and allows for plenty of time to sunbathe and swim. The hours of sunshine then starts to decrease to 11 hours in August which is still more than enough time to enjoy days out.

In June, the average sea temperature is a warm 23°C which increases to 25°C in July and again to a very warm 26°C in August which is the annual peak. This is the perfect time of year for getting a sun-tan, swimming and enjoying some Mediterranean summer weather!

The autumn months begin in September and initially see temperatures dip slightly but remain warm as the tail-end of summer clings on. For example, in September, the average temperature is a very warm 23°C with highs of 26°C which decreases to a warm 20-23°C in October and again to 17-19°C in November. These are hardly chilly temperatures compared to other northern European destinations during this season but night-time lows do drop from 19°C to 14°C by the end of autumn. Still, whether the temperatures are at their highest, lowest or anywhere in-between, you will still be able to enjoy everything about Heraklion including the many museums and monasteries.

The average sea temperature in December is a relatively cool 18°C which then decreases to 17°C in January and again to 16°C in February which is the lowest all year and means swimming is off the cards. December will see a 44% chance of a windy day which then increases slightly to 45% in January and February which is the highest in the year. This is matched by high levels of rainfall between 80mm and 100mm per month. Throughout the winter there will only be 4 hours of sunshine per day which is the lowest Heraklion will see. 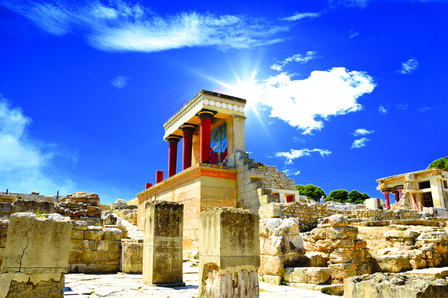 Spring in Heraklion starts in March and sees relatively mild weather throughout. In March the average temperature is a relatively cool 13°C which is the second lowest in the year. This then increases to a warm 16°C in April and again to a still warm 19°C in May. There are also peaks of 16°C to 23°C and lows of 10°C to 15°C in the evenings which is an improvement since the winter months.

If you would like to see more about how these averages are calculated please visit this page.