The latest and today's weather in Sousse , Tunisia updated regularly

View by:
Sort by:
Sousse IMAGES

Sousse is Tunisia's third largest city and located 150 km from the capital of Tunis. Situated on the Gulf of Hammamet in the Mediterranean, it is a great place for a holiday of rest and relaxation. Sousse is in Africa and is saved from the hot desert winds by its location on the coast. Summers are warm and temperatures can rise quite high, while the winters are mild with a bit of rain. Sousse is near the resorts of Skanes and Monastir. Peak season is from April to October, and it can get crowded during this period. During the off-peak season, the weather is still good and one can take advantage of having less people milling around as well as the off-peak rates in the hotels. 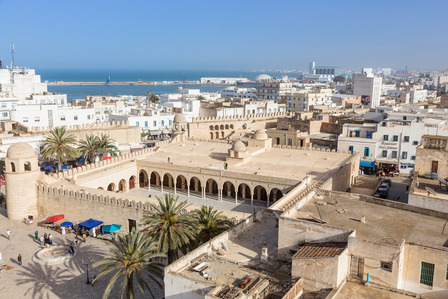 It is also one of the most popular holiday destinations with its mild Mediterranean climate and fantastic shoreline. The climate in Sousse is typically Mediterranean meaning warm summers with plenty of sunshine and mild winters. There are rarely extremes in temperature. The climate is regulated by the surrounding sea.  In Sousse, the tourist-packed summers can reach highs in the mid-twenties, while the rainy autumn months average in the high teens. If you enjoy mild weather for your holiday, head to Sousse in winter or spring when you can avoid summer crowds and autumn rain. The best time to visit Sousse, though, is between the months of May and October. That being said, in the height of summer, the heat can be unbearable.

Summer is the main tourist season as the weather becomes perfect for enjoying the beautiful beaches. Summers are hot with temperatures sometimes reaching a scorching 40°C in July. It remains very warm at night, with temperatures at about 22°C to 28°C. It is imperative that your hotel has air conditioning to help combat the heat. Situated on the Gulf of Hammamet, Sousse is saved from extreme heat of the south because of its coastal breezes. The summer months of June, July, August and September are characterised by long, hot, sunny days and warm nights. Temperatures are about 28°C to 31°C, and it can get even hotter than that, and the night-time lows are usually 20°C to 22°C. Humidity is on the higher side at 71% to 72 %, however rainfall is seldom, with September recording the highest rainfall at 18mm. Visitors often love to indulge in swimming with the sea temperatures at their yearly high of 20°C to 25°C. The sun shines for a massive nine to twelve hours with August clocking the highest amount of sunshine per day.

The months of October and November see temperatures still well within the 20's. October records highs of 25°C and lows of 16°C, and November is cooler at 21°C on the higher side and 12 °C on the lower side. The sea is still warm in the autumn at 21°C to 22°C, making it a great time to enjoy water sports in a wetsuit in a more secluded atmosphere without the summer crowds. Autumn in Sousse is a great time to visit if you like cooler temperatures, but keep in mind it is also the wettest times of the year with around 40-50mm. October records the highest rainfall in the year with 48mm of rain, and it rains for about five to six days on average during this season. The humidity level falls slightly to 64% to 69%, and there are about seven hours of sunshine a day, which may cut your day short but there is still a lot you can do inside the hotels and resorts.

Winter weather is pretty good in Sousse the temperatures recorded are about 16°C to 18°C and the night-time lows can dip down to 6°C to 9°C, so you will need a sweater or a jacket for the evening. In winter, there are usually five to six days of rain with an average rainfall of 42mm in December, 31mm in January and 17mm in February and the average humidity is anywhere from 62% to 67%. The sun shines for a minimal six to seven hours so there is not much that can be done during the few hours of sunlight. The sea is cool at 15°C to 17°C, which is quite cold for a swim but it's never a bad time to visit the beaches. While you might not be able to get a tan, enjoying the spray of the water as you walk is always nice. Adventurers can even bring their wetsuits and enjoy the waves without the crowded beaches of summer. There is still plenty of sunshine in Sousse at this time of year and plenty to do.

The spring months of March, April and May see average high temperatures of 19°C, 20°C and 23°C, and average low temperatures of 10°C, 12°C and 15°C, respectively. Spring is similar to autumn in that it is a little quieter, cooler and cheaper. As already mentioned, the months either side of high summer can offer great weather.  May frequently enjoy highs in the mid-20s as well as plenty of daily sunshine. By late spring, however, the rain comes in but temperatures remain mild. The temperatures increase quickly with the onset of spring highs in March average at 17°C and can touch 20°C in April.

The average sea temperature is still at 15°C to 17°C so it is still quite cold for a leisurely swim in the spring but you could possibly enjoy the waves in your wetsuit. In March, there could be as many as seven days of rain and the average rainfall is about 22mm, 32mm and 14mm respectively. The humidity starts to build up at 65% to 71%. There are about seven hours of sunshine in March, and this increases to about eight hours in April. May sees a good ten hours of sunshine. Late spring can be quite dry making it a great time to visit Sousse before the beaches become too busy. It's also nice to enjoy a walk on the beach before the high season arrives in summertime. Local attractions are less busy this time of year, as well, and you can see what Sousse has to offer in addition to its beaches.